The Lambert Land was purchased in 1843 by Frank (Lambert) Jones and twenty-nine other freed slaves from Virginia. The group and their descendants lived on the land for two or three generations before unpaid taxes led to the sale of the land by the county. Today, their story is memorialized on a plaque at the Morgan Bethel Church Cemetery (the church was founded by some of the group and other African Americans in 1845). 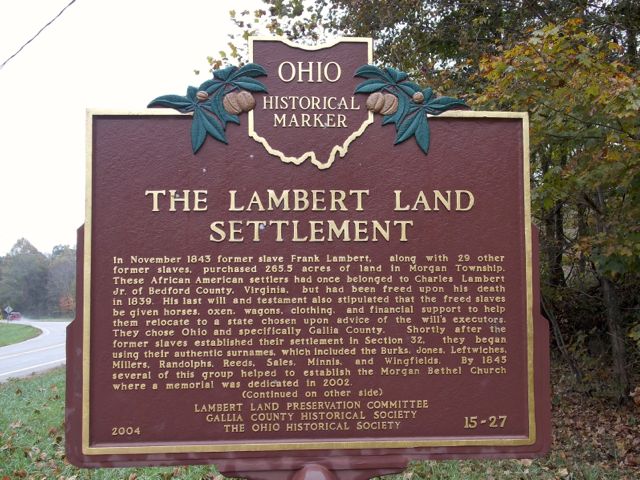 For years it was believed that the Lambert Land in Morgan County, Ohio had been purchased by two slave-holding, Virginian plantation owners who freed their slaves nearly twenty years before the Emancipation Proclamation. The land was then given to the former slaves and their descendants. A descendant of one of these slaves, Glenn Miller, and his wife, Corliss, were doing research for the Lambert Land Preservation Society (founded in 2002 by Estivaun Mathews) when they learned that this old story was not entirely true.

Gallia County Deed Records confirm that a Frank Lambert, along with twenty-nine other individuals with the surname Lambert, purchased the land in 1843. What had long been mistaken was that Frank Lambert, also known as Frank Jones, was not a plantation owner; he was a former slave. In 1839, Charles Lambert, Jr., the actual Virginian plantation owner, passed away. His will granted freedom to his slaves and provided funds for them to buy land in a free state.

It took four years for Lambert’s former slaves to secure the money they had been promised. Once that had been accomplished, the group of thirty traveled from Virginia to Ohio, where they bought 265.5 acres of land. The land was owned in common and could be lived on by the former slaves and their families as long as they paid the taxes for it. Settling in, many of the thirty started going by their authentic last names instead of “Lambert.” In 1845, the group, along with other African Americans in the area, founded the Morgan Bethel Church. Some of the former Lambert slaves were buried in the church’s graveyard.

The families lived on the Lambert Land for two or three generations, with many moving away by 1960. With fewer families on the land, the taxes went unpaid, and the land was auctioned by the county in 1969, bringing an end to the Lambert Land’s story.