When moving across Iowa in the summer of 1835, the First Regiment of the U.S. Dragoons blazed trails scouting the state for greater settlement opportunities, and this march established several outposts from Fort Dodge to Des Moines and Knoxville. The Dragoon Trail is over 200 miles long, and it marks the first time that Iowa’s plentiful natural resources became widespread knowledge. The Dragoon Trail Historical Site Marker No. 7 rests on SW Water Street in Des Moines, near the stone marker of the Site of The Old Fort Des Moines. Driving or bicycling the Dragoon Trail is a popular scenic adventure, though visiting the marker transports visitors back to the founding of Iowa and the labor of westward expansion. 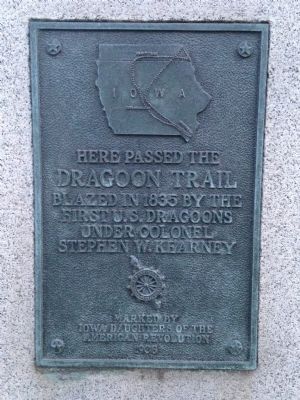 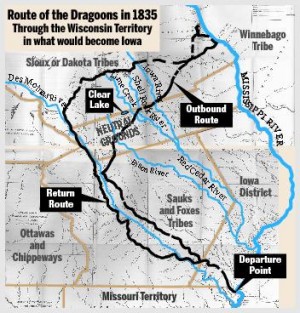 Depiction of a Dragoon Soldier Escorting a Wagon Train 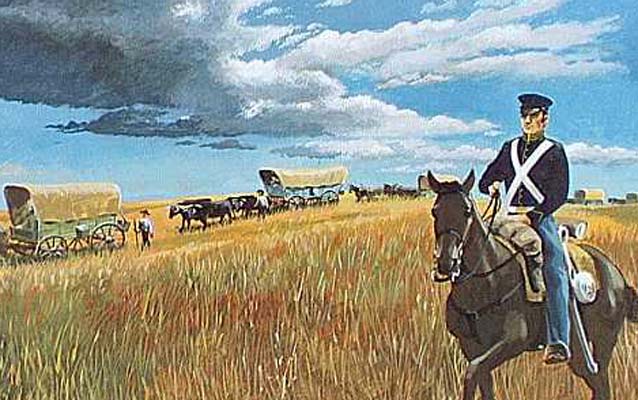 The first half of the 19th-century was marked by rapid westward expansion, especially following the 1803 Louisiana Purchase which saw the acquisition of territory from the French and military expeditions against the Native American tribes who occupied the vast majority of the land in question. As eastern settlers moved west, they needed security from harsh conditions as well as nearby military outposts to assist settlers when native tribes sought to defend their sovereign lands.

History of the Dragoons

The history behind the Dragoon Trail Historical Site Marker No. 7 requires looking at both the U.S. Dragoons as well as the story of Iowa’s founding.

In essence, the Dragoons date back to the end of 1776, when George Washington sought a need for a mounted branch of the military, and by 1777, Washington had four fully trained Dragoon regiments. These regiments participated in the most important battles of the Revolutionary War, from Brandywine to Yorktown.

The Dragoons were also present during the War of 1812 and then later in the U.S.-Mexican War. Although officially disbanded when they became the 1st and 2nd Cavalry in 1861, the Dragoon name has endured throughout Vietnam as well as Operation Iraqi Freedom and Operation Enduring Freedom.1

The first expedition through Iowa was in 1820, and another expedition occurred between 1824 and 1825. These expeditions were quite significant in terms of scouting and research, but they paled in comparison to the eventual Dragoon Trail.

In 1833, the Black Hawk Purchase opened Iowa for settlement by non-Native Americans, and to prepare the area for eventual settlement, Lieutenant Colonel Stephan W. Kearny led the 1st U.S. Dragoons through Iowa in 1835.

Starting on June 7th of that year, the Dragoons moved northwest between the Des Moines and Skunk Rivers until reaching present-day Stratford. The trip continued through Lake Pepin, Deer Creek, and the Lizard River before arriving back at Fort Des Moines No. 1 on August 19th.

This 1835 expedition was recorded by Lt. Albert M. Lea, and in addition to making the area safe for settlers, Lea and the Dragoon’s findings encouraged settlers to move to the area for its plentiful resources ideal for farming and other industries.2

By 1933, the State of Iowa opened the Dragoon Trail and helped transform it into a 200-mile scenic drive along the Des Moines River. It starts in Fort Dodge and ends near the Pella/Knoxville area, and the trail allows adventurers to witness many of the same sites as the 1st U.S. Dragoons did back in 1835. The inscription on the Dragoon Trail Historical Site Marker No. 7 reads: