During June 11-12, 1864, Union General Phil Sheridan and his Union Calvary clashed with a Confederate Calvary under General Wade Hampton and Fitzhugh Lee at Trevillian (also referred to as Trevilians) Station. Union troops pushed the Confederates back allowing Union General George Custer to split the troops and take Hampton's supply train. The Union would destroy miles of railroad. Union troops tried to force the Confederates out but would fail as the Confederates held their lines. The battle is known as the largest and bloodiest all-cavalry battle of the Civil War.

Train depot at Trevilians Station as it looks today 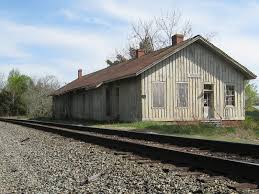 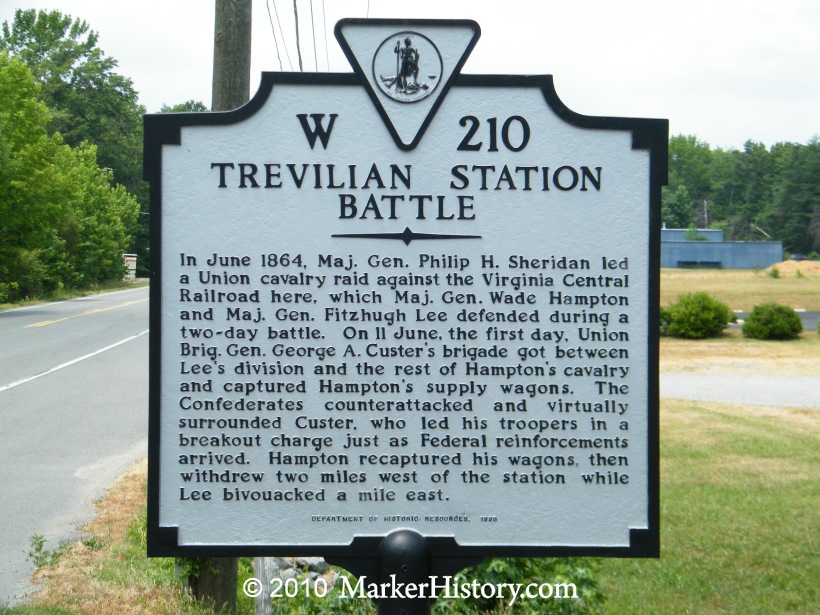 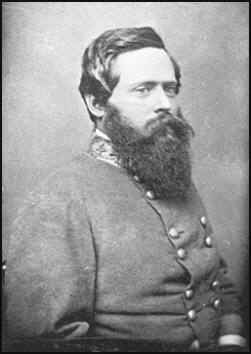 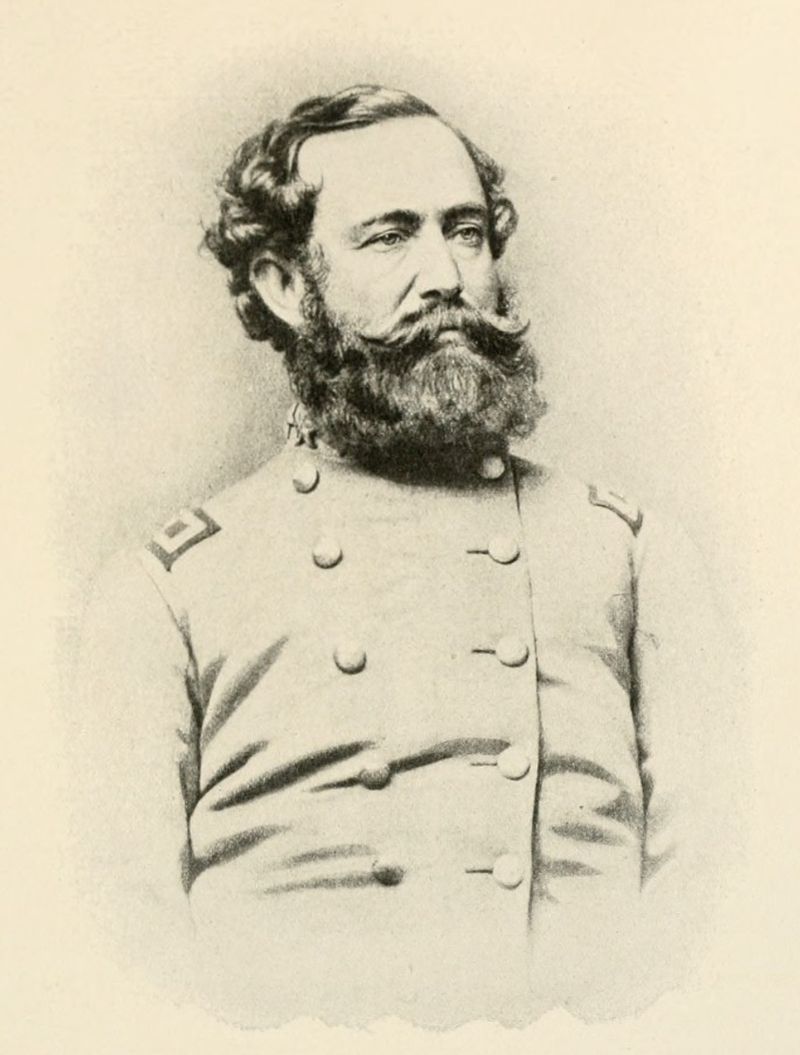 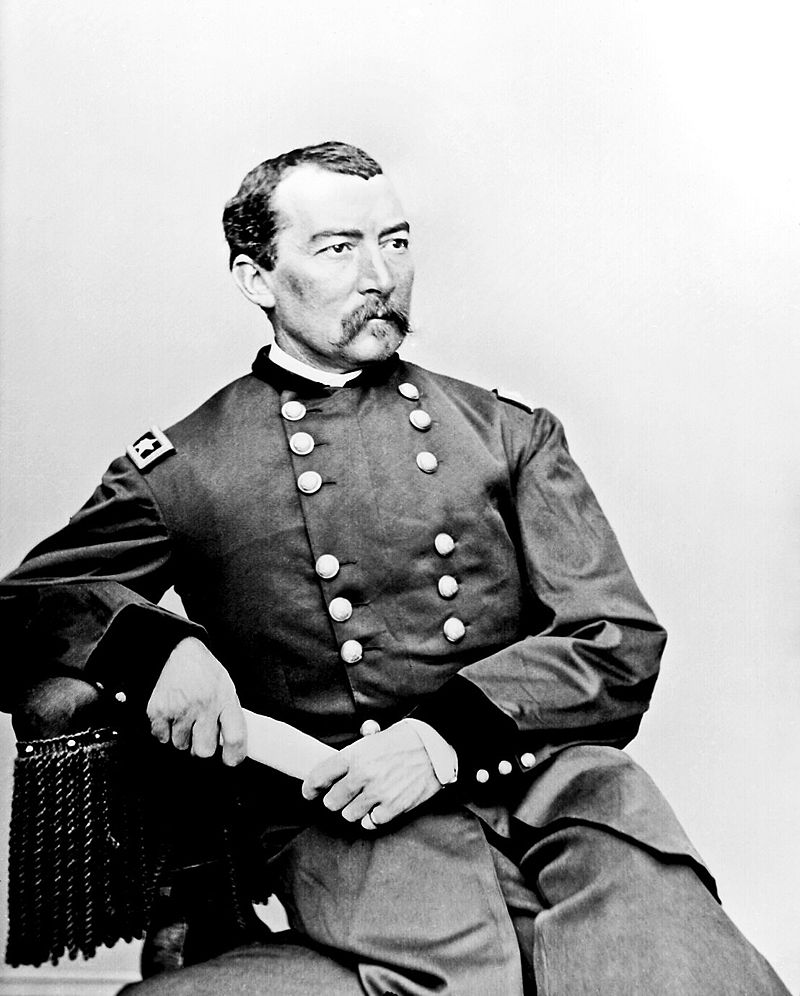 Movement during the second day of the battle 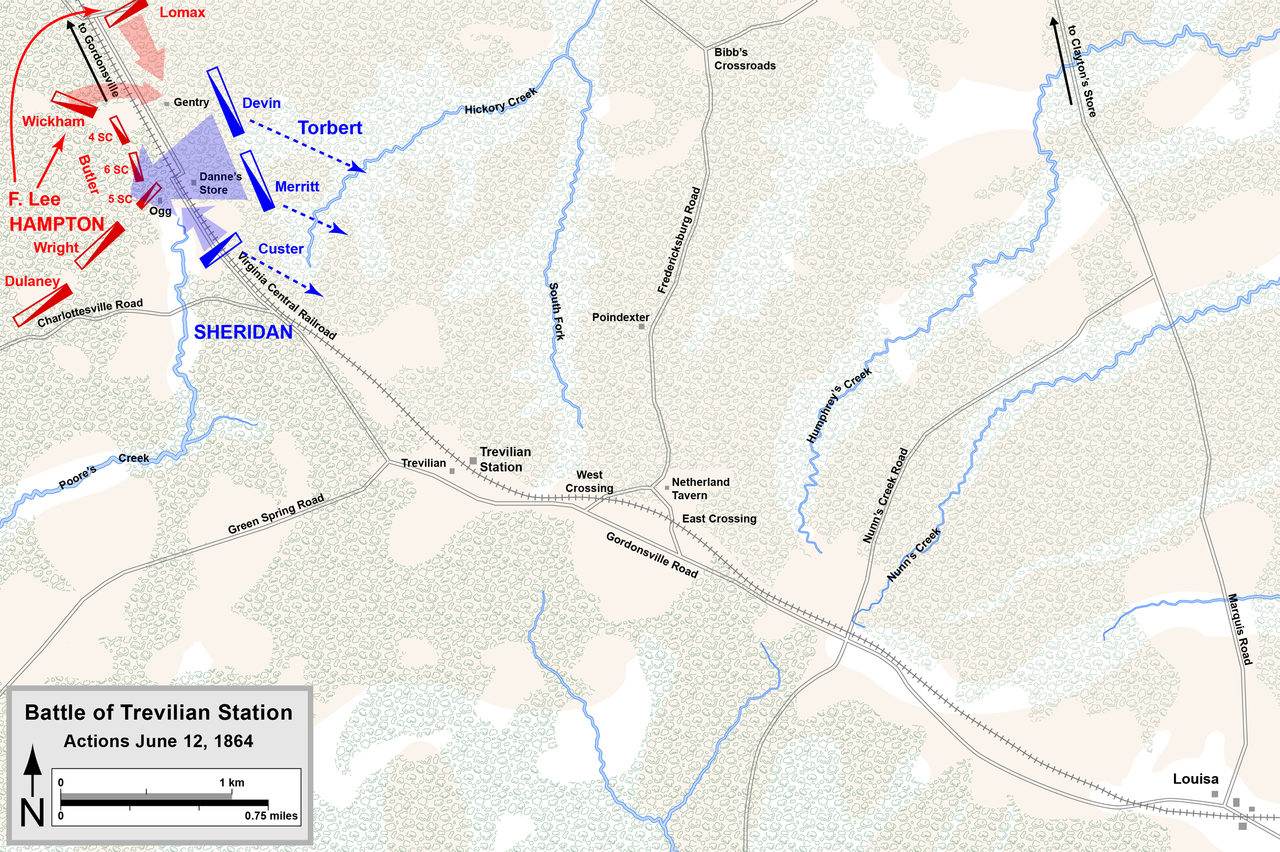 Movement during the first day of the battle 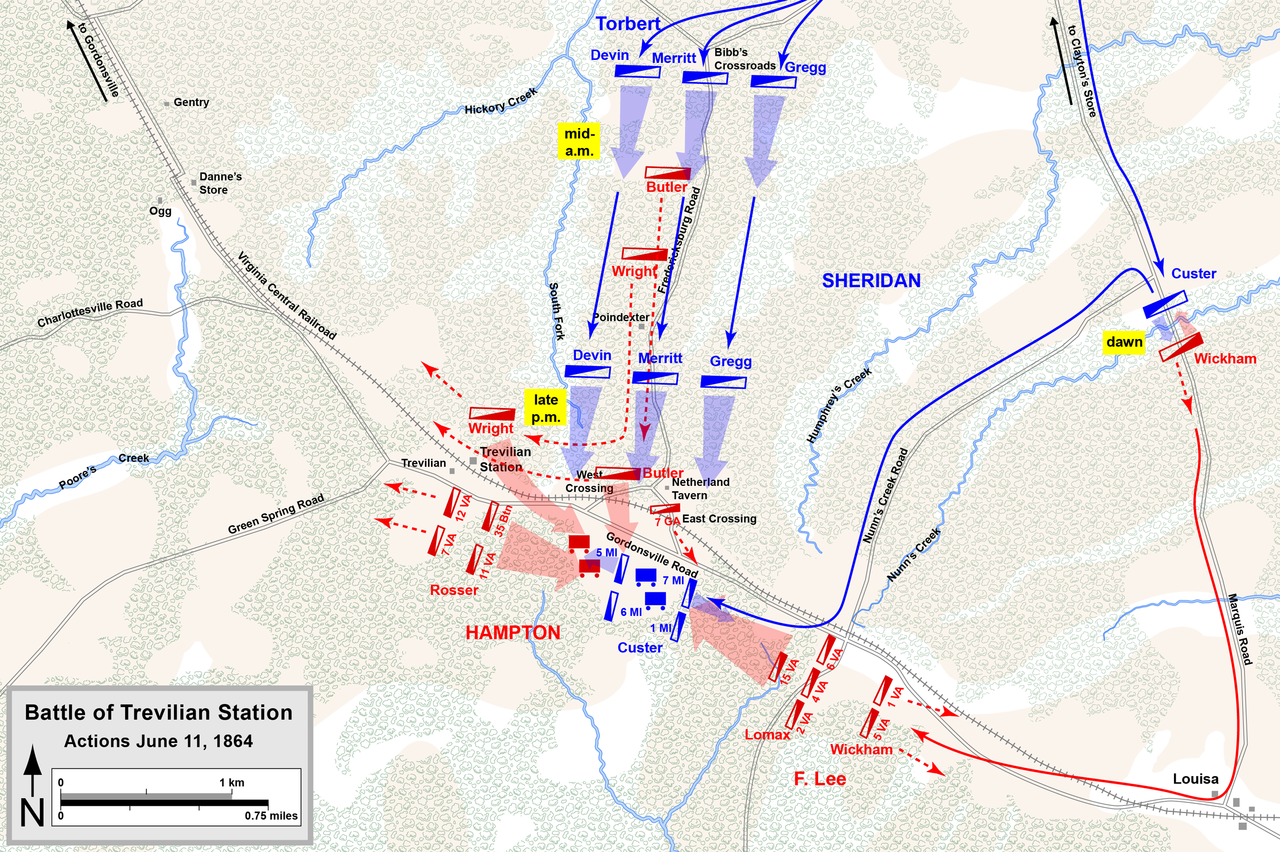 Reenactors during the 150th anniversary 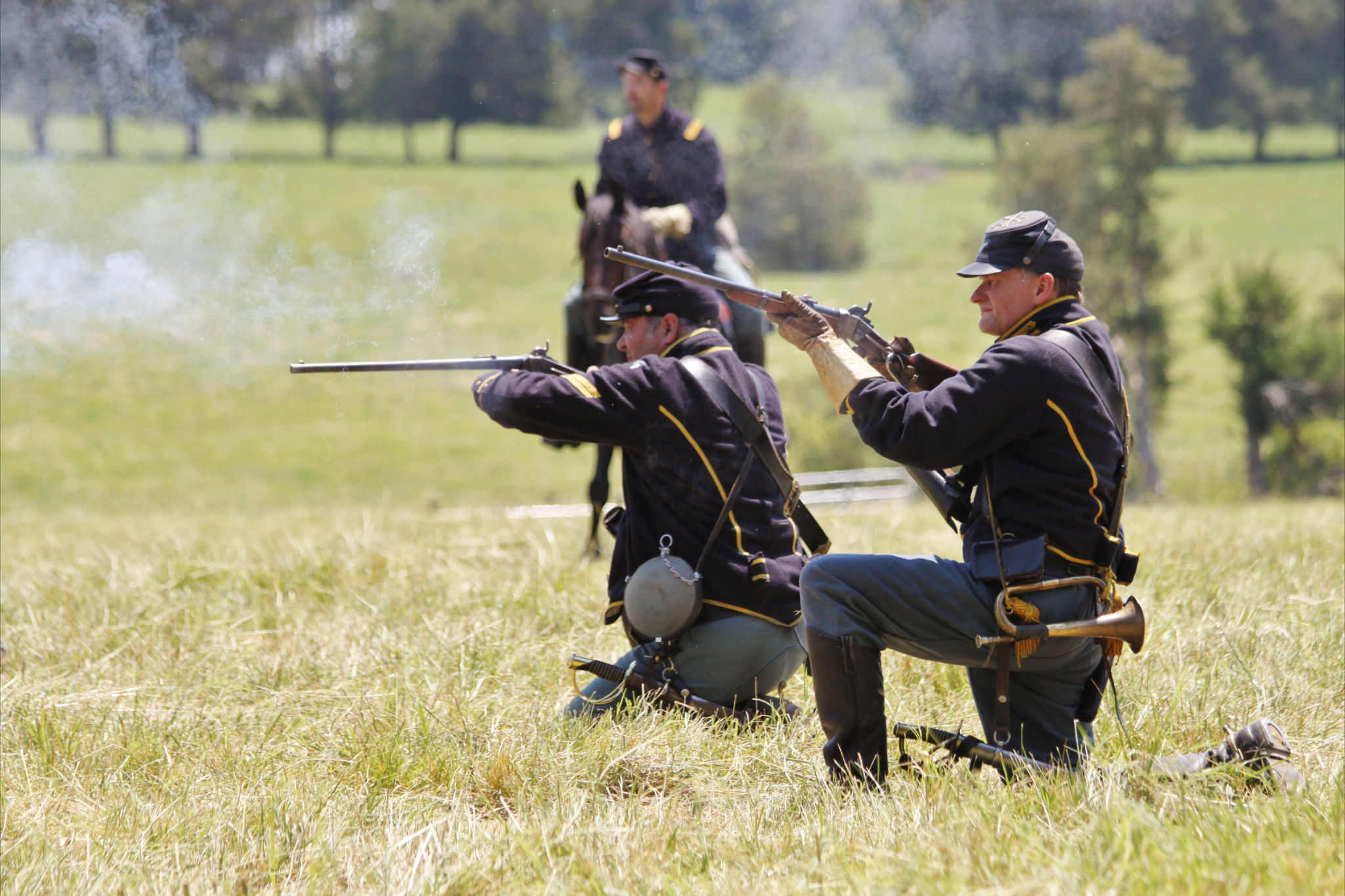 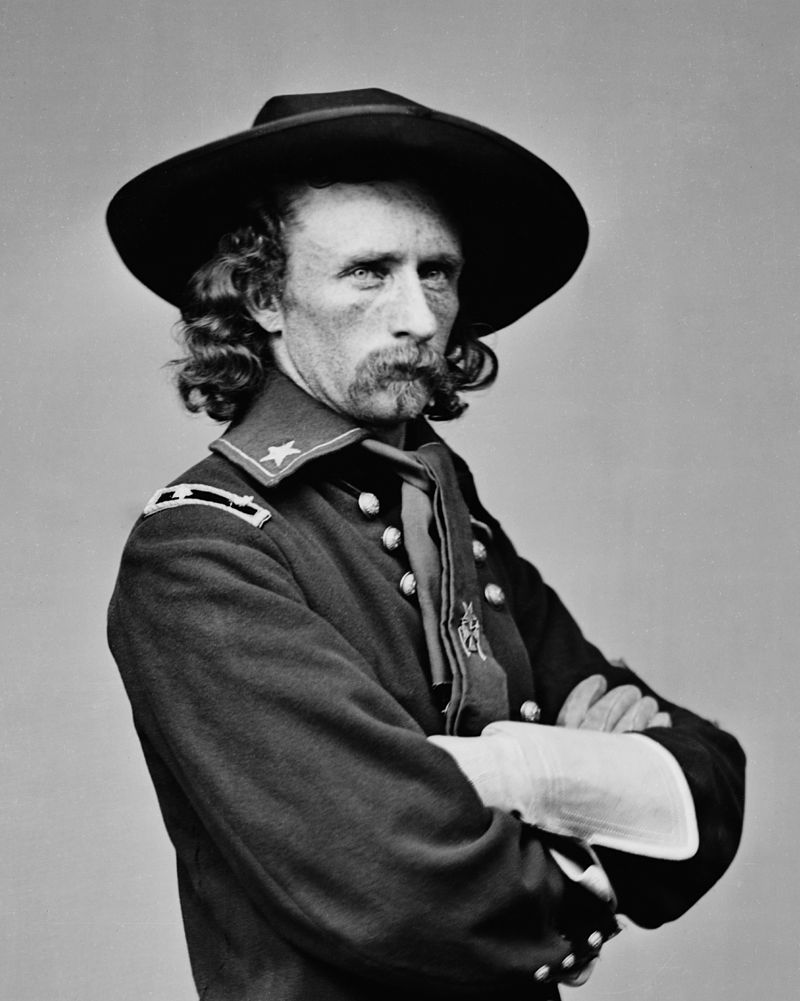 Battle of Trevillian monument. Erected in the 1920s. 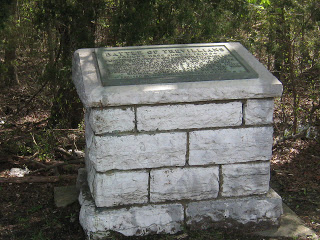 Netherland Tavern in 1864. This building served as a hospital following the battle. 94 men, listed as "unknown" were buried outside the tavern 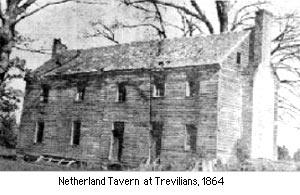 In June of 1864 Union General Ulysses Grant ordered General Sheridan to go on  a raid destroying as much of the Virginia Central Railway as possible. His ultimate goal was to destroy the road in Gordonsville, then move into Charlottesville and destroy the supply depot there and join up with Major General Hunter where they would join the army at Petersburg.

General Sheridan met the Confederate Calvary under Generals Wade Hampton and Fitzhugh Lee at Trevilians Station, 6 miles southeast of Gordonsville. The first day of the battle Hampton struggled against the Union troops and Lee's men had to fall back. This gave Union reinforcement troops under General George Custer the opportunity to split the Confederates and capture Hamptons supply train. However, Custer's charge took him farther away from Union lines than planned and he found himself surrounded from three sides. During the desperate fighting, his mortally wounded guidon barer tore the unit's flag (5th Michigan) from its staff and gave it to Custer, who stuffed it into his coat. Sheridan sent brigades under Merritt and Devin to Custer, who's unit (and Custer himself) was rescued, though losing 361 men. This moment from the battle as been coined, "Custer's First Last Stand," foreshadowing his fatal Last Stand in 1876 during the Battle of Little Bighorn in Montana.  The Union would destroy miles of railroad here.

The second day of the battle would be different. Confederates would gain reinforcements. The Union would try and defeat them but the Confederates had fortified their lines and pushed back every Union attempt. Sheridan would be forced to withdraw he would fail to meet up with Hunter, but did succeed in destroying rail lines and drawing attention from General Grants movement of troops, so that Grant could cross the James River unopposed.