Established in 1906, the Montezuma Castle National Monument is cliff dwellings that have been preserved. These dwellings were created by the Sinagua people sometime in the time frame of 700 AD. This monument was named after the Aztec Emperor, Montezuma, which was a mistake, because he was unrelated to the construction of these dwellings. The dwellings were a huge project and took around 5 decades to complete. It is believed that the Sinagua people lived here from 1100-1425 AD. The dwellings are littered with ash from the Sunset Crater Volcano and many people believe this ash benefited the people by providing rich soil which aided the people in their agricultural work. The people also were believed to use an irrigation system to get water to their crops. The cause for the desertion of the area remains unknown, however, it is believed to be due to a combination of climate problems such as a major drought as well as conflict between rivaling tribes. The dwellings and the areas where the ancient people lived were declared a U.S. National Monument. It is perhaps the best-preserved cliff dwelling in all of North America.

A photo of Montezuma Castle, pt.1 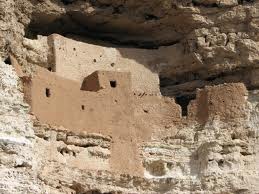 A photo of Montezuma Castle, pt.2 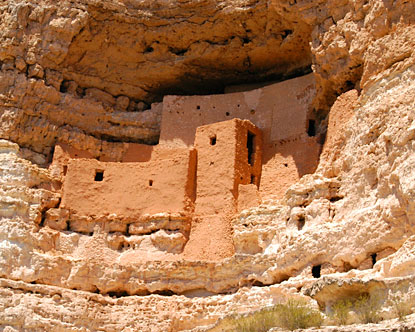 Motezuma's Castle is a five-story cliff dwelling consisting of about twenty rooms built into an alcove 100 feet above the floor of Beaver Creek Canyon. The ruins face south which is a characteristic of most cliff dwellings that allows them to catch and retain as much warmth from the sun as possible. The cliff face into which the structure is built consists of a whitish, fairly soft limestone that has weathered to produce numerous alcoves and caves, many of which have been walled off to create living or storage spaces.

A few dozen yards to the west of Montezuma Castle is a second ruin. Dubbed "Site A" or "Castle A" by archaeologists, this ruin was once even larger than the Castle itself, consisting of 40 to 45 rooms. Constructed in a series of terraces up against the face of the cliff, it was not as well protected from the elements as the Castle was. There is also evidence that the structure was razed by fire sometime near the end of its occupation. All that is left now are the outlines of the ground-level foundations, and some walled-off alcoves further up the cliff face.

From about 600 to 1100 AD, the region was occupied by a group of people with ties to the Hohokam, a major culture centered around present-day Phoenix. The remains of pithouses—one-room structures built of rock, mud, poles, and sticks —can still be found in the area. One such pithouse is on display at Montezuma Well, five miles to the northeast of Montezuma Castle along Beaver Creek. Around 1100 AD, the region began to see an influx of Sinagua from the north. All of the large, multi-roomed complexes in the Verde Valley, including Motezuma Castle, Montezuma Well, Tuzigoot, the cliff dwellings around Sedona, and Walnut Canyon near Flagstaff date from about that time. Montezuma Castle itself was constructed and occupied during the period 1200 to 1450.

Most of these sites were continuously inhabited by the Sinagua for approximately three hundred years. They were all abandoned between 1400 and 1450 AD, a period that marks the collapse of all the major civilizations in the southwest, including the Sinagua, Hohokam, Salado, Mogollon, and Anasazi. The reasons for this regional collapse have never been fully understood, but possible explanations for the abandonment of these lands include the exhaustion of farmlands due to non-sustainable agricultural techniques, and war.

The name "Montezuma Castle" was coined by early white settlers in the mistaken belief that the ruins were associated with Montezuma. Montezuma was the ruler of the Aztec Empire from 1502 to 1520, the beginning of the Spanish conquest of Mexico.

Although known to locals for many years, the site was not investigated in a scientific manner until the late 1800s at which time certain sections were already in danger of collapse. The Arizona Antiquarian Association undertook some emergency repairs between 1896 and 1900, but little other official attention was paid until Theodore Roosevelt declared both Montezuma Castle and Montezuma Well a national monument in 1906. In 1927, the National Park Service undertook a major stabilization project in an attempt to repair damage done by almost a century of uncontrolled looting and digging by treasure hunters. Tourists were allowed to enter the ruin via a series of wooden ladders up until 1951. Today access is allowed only for official reasons. Most of the monument is 90 percent original despite the renovations put on it.