Founded sixth of the California missions, Mission San Francisco de Asís is the oldest surviving structure within the city of San Francisco. Founded in 1776 by Lieutenant Jose Joaquin Moraga (who is buried in the Mission cemetery) and Padre Francisco Palou during the famed de Anza Expedition, the site includes a cemetery and gardens as well as the graves of many notable historical figures. The famous Alfred Hitchcock film Vertigo filmed a scene in the mission and the mission's cemetery. 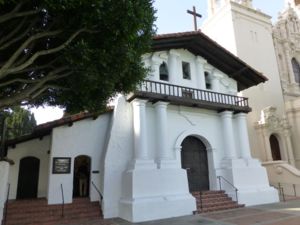 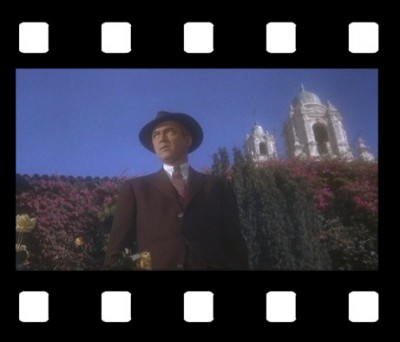 Another scene from VERTIGO (Kim Novak) 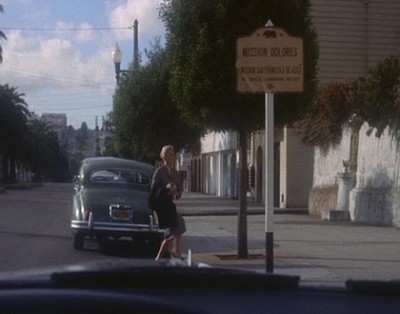 A 1772 map drawn of San Francisco Bay by Padre Juan Crespi. The landmass at bottom right is the Peninsula. Across the Golden Gate from it, note Point Reyes near bottom center (Online Archive of California). 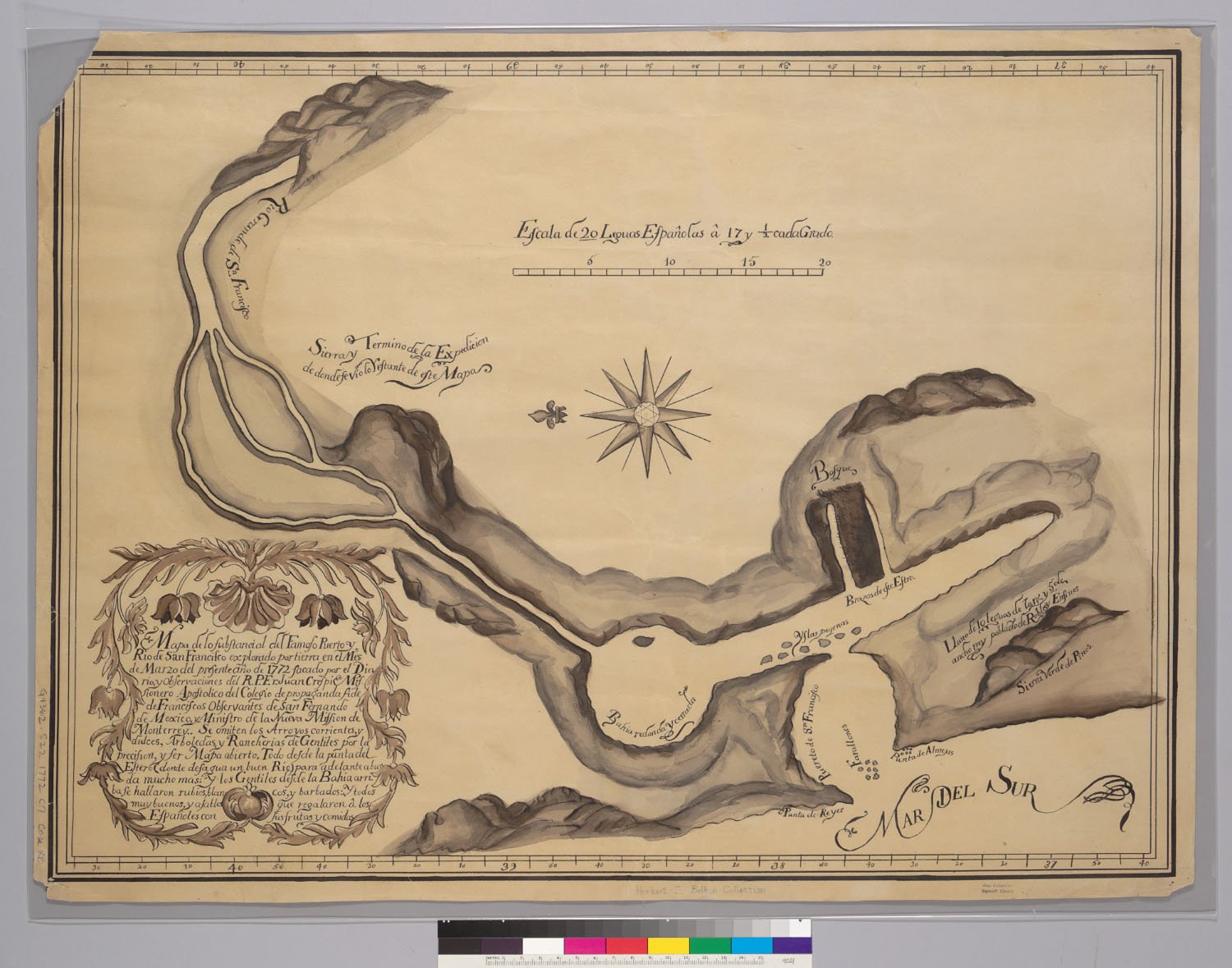 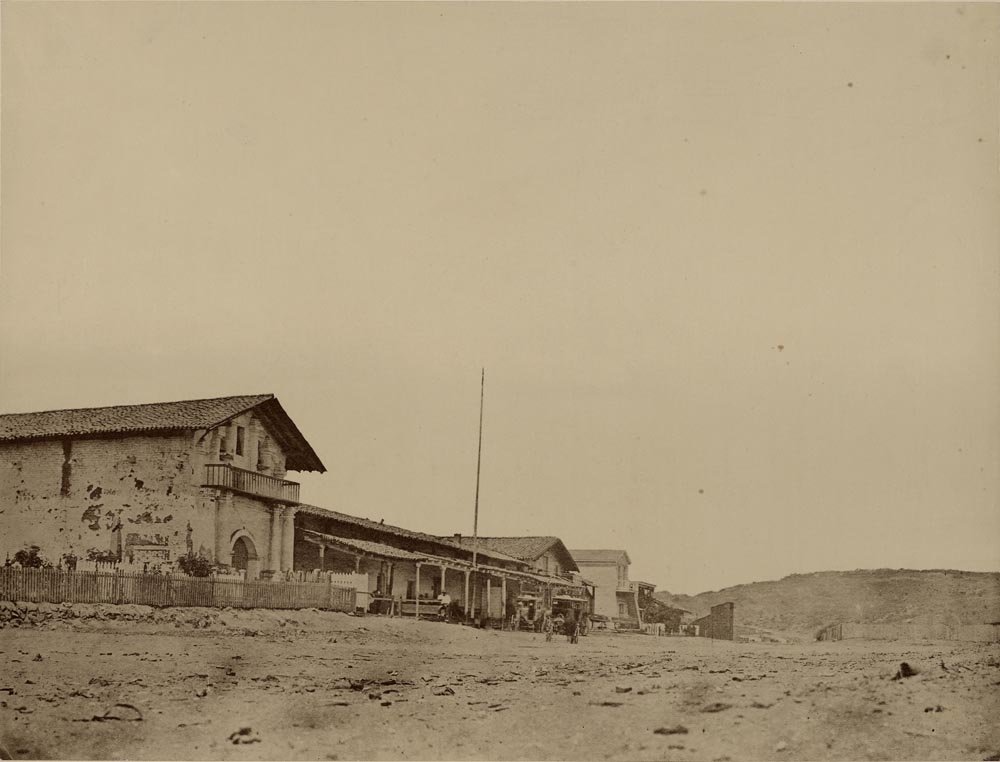 A new basilica built in 1918 dwarfs the original Mission chapel. Nonetheless, the original structure has stood the test of time, having weathered many earthquakes and fires. 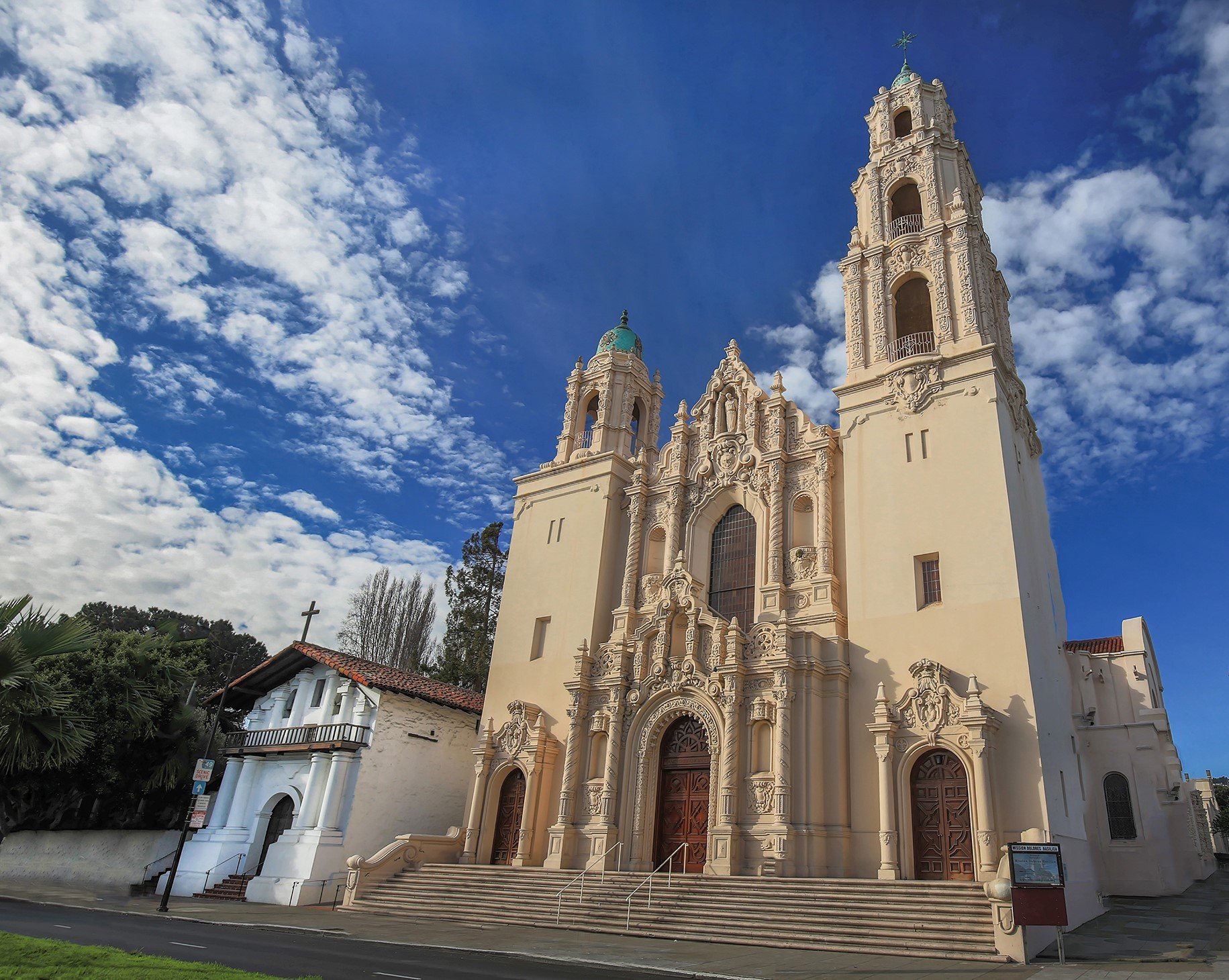 Father Junipero Serra, President of the California Missions. While not personally present at the founding of Mission San Francisco, he was still likely responsible for the naming of the Bay and Mission. 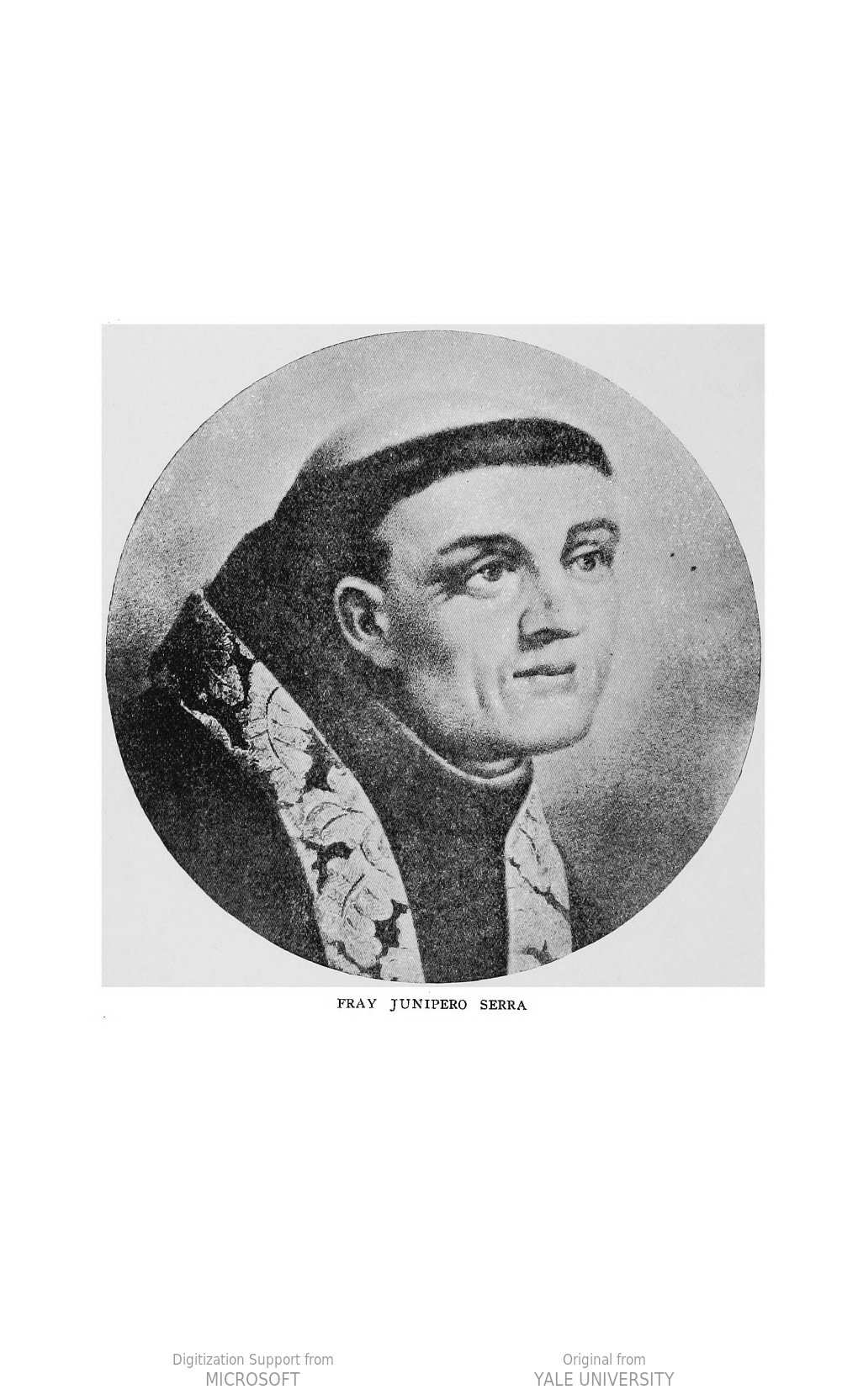 The Misión San Francisco de Asís was founded October 9, 1776, and named after St. Francis of Assisi, the founder of the Franciscan Order, but was also commonly known as "Mission Dolores" owing to the presence of a nearby creek named Arroyo de los Dolores, or "Creek of Sorrows."  Mission Dolores is the oldest intact building in the City of San Francisco and the only intact mission chapel in California’s chain of twenty-one.

Lieutenant Jose Joaquin Moraga, two Franciscan friars, and their companions were not the first Spanish to set foot on the San Francisco peninsula. Seven years prior, explorer Gaspar de Portola’s weary and famished expedition, having failed to recognize their objective (the natural harbor at Monterey) stumbled upon the San Francisco Bay and christened it after the Franciscans’ namesake before turning back for want of supplies. A smaller survey party (the “Fages expedition”) accompanied by the early missions’ exhaustive chronicler, Padre Juan Crespi, reconnoitered the eastern shore of the bay in 1772, but established no permanent presence.

In March 1776, the second expedition of Juan Bautista de Anza, who had already established a supply route through the difficult mountains separating New Spain (Mexico) to California, arrived at the northern tip of the San Francisco peninsula. Aided by surveys performed in the prior twelve months by Spanish sailing vessels and their crews, De Anza selected sites for the Presidio (a fort where Spanish soldiers would be quartered), the pueblo and its mission, but like Portola was forced to return to Monterey for supplies before he could establish a base.

In June 1776, the final expedition under Moraga, accompanied by Padres Francisco Palou and Pedro Cambon, who were to found the Mission, set out from Monterey. Their first mass, in a small chapel built of branches, was held at the site on June 29, a mere five days before the signing of the Declaration of Independence on the opposite side of the continent. This signified the founding of the pueblo. As supplies and manpower arrived by ship in the following months, the Presidio was dedicated on September 17th, and the Mission at last on October 9.

With a group of Spanish colonists brought by ship from Mexico and the active recruitment of Natives from Ohlone tribes in the surrounding area (missions were often sited near Native American villages for access to resources and population), construction quickly moved forward. The permanent chapel would at last be completed in 1791. Lieutenant Moraga died in 1785, and is buried in the Mission’s cemetery.

Also buried in the cemetery are many Ohlone, Miwok, and other First Californians. While Mission San Francisco was essential to extending Spanish control around the Bay and northward, the damp location lent itself to the spread of disease among its inhabitants. Its population appears to have never exceeded 1,200, and for much of its history failed to top 500.

The Mission is nevertheless one of California’s most enduring--a steadfast witness to the span of San Francisco's history, including the California Gold Rush and the 1906 San Francisco Earthquake. Its population dwindled to below 200 after all missions were secularized by the Mexican government in 1834. Its buildings began to crumble from neglect, but it was rescued from obscurity when the property was restored to the Catholic church after American annexation in 1846. It regained prominence with the influx of population from the Gold Rush in 1848-49. In its cemetery lie prominent figures from the early days of California statehood, such as the grave of William Leidesdorff, a black citizen who owned the first steamboat on San Francisco Bay.

Much of the film’s 20th Century notoriety comes from its cameo in the Alfred Hitchcock film Vertigo. Character Scottie Ferguson (played by James Stewart), follows Madeleine Elster (Kim Novak) into Mission Dolores and the cemetery. He watches Elster lay flowers at the grave of "Carlotta Valdes". The grave was made specially for the film, but tradition holds that the 'grave' was allowed to stay for many years afterwards.

The original Mission is open to the public. Though it holds only small services annually, it is bordered by a much larger Catholic basilica built in 1918 which is in everyday use.