Dedicated in 1916 by the local chapter of the Daughters of the American Revolution, this memorial commemorates the soldiers from Henderson County who fought for the cause of independence from Britain in the Revolutionary War. The monument includes the names of twelve local men from the county who served the young nation during the war, including General Samuel Hopkins who was seriously wounded in the Battle of Germantown. After the war, Hopkins settled in Kentucky and served in both houses of the state legislature. The nearby city of Hopkinsville was named in honor of the Revolutionary War General.

The Revolutionary Monument in Central Park 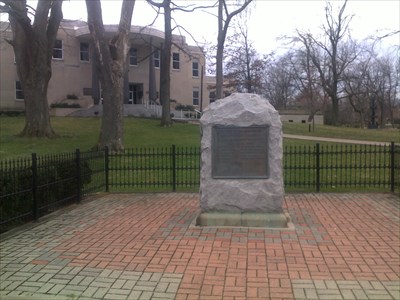 The General Samuel Hopkins Chapter of the Daughters of the American Revolution was formed in February 1896. The chapter is one of the oldest DAR organizations in Kentucky and its members maintain the monument. This veterans monument was the first of its kind in the community and was dedicated on May 29, 1916.

The DAR had been planning the construction of the monument since 1910, according to research published by Frank Boyett in the Henderson Gleaner. Governor Augustus Stanley was the keynote speaker at the dedication ceremony and the occasion was his first visit back to Henderson since taking office at the first of that year. "This monument is not erected to the dead," Stanley proclaimed, "but to the living." "The memories of these noble men whose names are inscribed here will live on after this tablet of bronze and marble has crumbled to dust," the governor concluded. Louise Palmer Cheaney, the great-great-great granddaughter of General Hopkins, concluded the ceremony by unveiling the monument.