The Soldiers and Sailors Monument is located in Fulton Bank quadrant of Penn Square in Lancaster, PA. It pays tribute to the Lancastrian Union soldiers killed in the Civil War. It also pays tribute to the men and women that served in America military conflicts. Created on July 4th, 1874, the monument is a 43 foot tall Gothic revival memorial.

The Soldiers and Sailors Monument. The four statues of men representing the four branches of American armed services. The Navy, the Army, Artillery, and U.S. Cavalry. 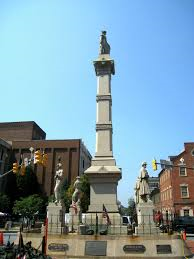 "Genius of Liberty" standing on top of the monument. 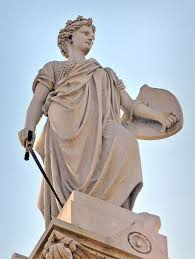 This monument stands in a historical location. The 1744 Treaty of Lancaster between the British and Iroquois was signed in the Lancaster courthouse. This is the exact spot where the monument was built. Another historical spot that was once here, is the where the Second Continental Congress met during the Revolutionary War on September 27, 1777.
Sitting on top of the 43 foot tall monument is a statue of a robed woman. She is known as the "Genius of Liberty". The woman is holding a sword and shield. On her head is a crown of stars, she's facing North, allowing her to turn her back on the former Confederate states. Surrounding the bottom of the monument is statues of four men representing the four branches of American armed services.The U.S. Navy, U.S. Army, Artillery, and the U.S. Cavalry. The names of the Civil War battles are carved on the central granite pillar. There are also bronze plaques that commemorates the role of African-Americans in the military. Other plaques commemorates those killed in WWI, WWII, Korean War, Vietnam War, and the Persian Gulf War.
It wasn't until the end of hostilities in 1865, when the idea for the memorial was created. The organization called Patriot Daughters of Lancaster by women funded the monument. On November 4, 1872 the monument was commissioned, and on July 4th, 1874 it was unveiled. The base of the monument is carved with the inscription "Erected by the people of Lancaster County/To the memory of their fellow citizens who fell/in defense of the Union/In the war of the rebellion/1861-1865.