Pictograph Cave, located in Pictograph Cave State Park just southeast of Billings, Montana, is a cave that is historically and archaeologically significant. Over 30,000 artifacts have been recovered from the site, which was first discovered in 1936. There are also over 100 rock paintings; the oldest is 2,000 years old and the most recent one has been dated between 200-500 years old. Two other caves, Middle Cave and Ghost Cave, are also located within the park. Artifacts include stone tools, weapons, and painting instruments. Pictograph Cave is the deepest of the three caves. It is recommended visitors bring binoculars to view the paintings and also the natural scenery and wildlife in the park. The cave was listed to the National Register of Historic Places in 1966 and designated as a National Landmark in 1964. 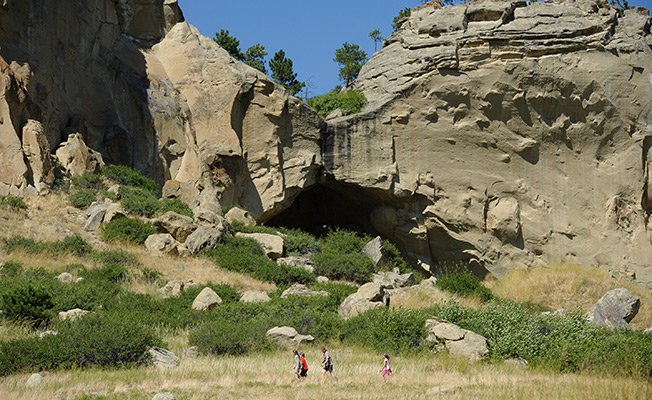 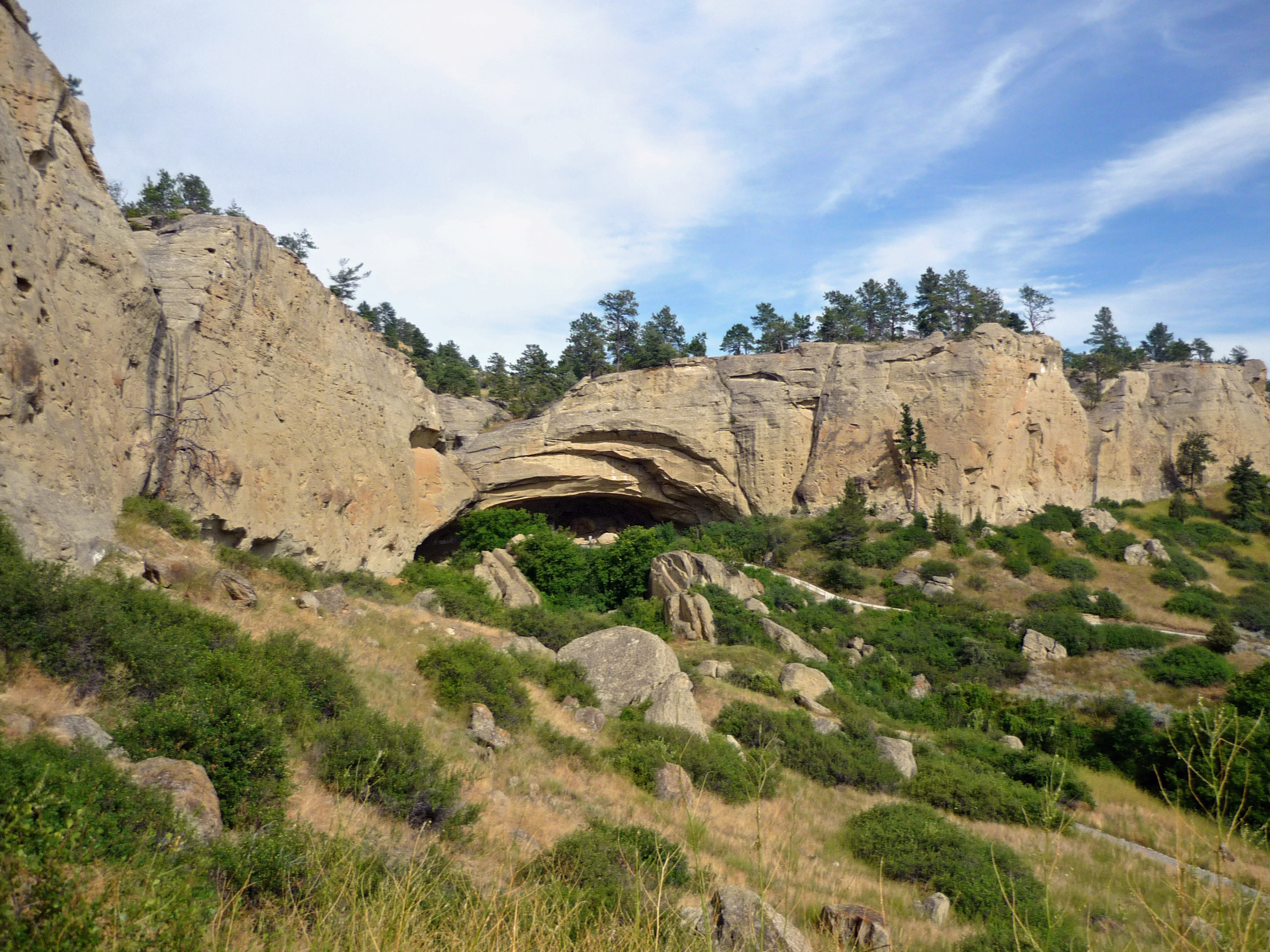 One of the rock paintings in the cave 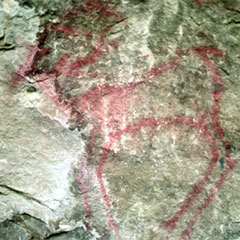 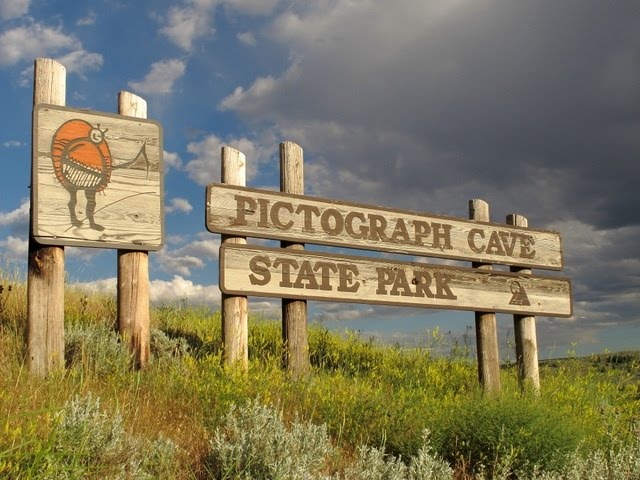 The three main caves – Pictograph, Middle, and Ghost cave complex was home to generations of prehistoric hunters. They were carved from the Eagle sandstone cliff by the forces of water and wind erosion. The first major discovery of artifacts and paintings in the caves was made in 1936. Approximately 30,000 artifacts, ranging from stone tools, weapons, paintings and the instruments used, have been identified from the site. The red, black and white pigments used provide key information and evidence suggesting that the caves were first used by nomadic hunters seeking shelter. The artifacts discovered allow researchers to pinpoint which peoples used the caves and when they inhabited the region. The park has paved trails to the caves, with interpretative displays along the route identifying and explaining the natural features, the prehistoric paintings and vegetation found in the area.

The Pictograph Cave is the deepest of the three main caves, at approximately 160 feet wide and 45 feet deep. Visitors are advised to bring binoculars to get a better view of the rock art. It is a National Historic Landmark. The park is 23 acres in size and 3,500 feet in elevation.

Flanked by Ghost Cave and Middle Cave on one side and a spring on the other, Pictograph Cave is the largest of three rock shelters nestled into sandstone bluffs overlooking Bitter Creek. In the early 1900s the “Indian Caves,” as the locals often called them, were a popular stopping place along the stage route between Billings and the town of Coburn on the Crow Indian Reservation. The curious often stopped to explore the caves, while others found the fresh spring water and cool shade of the nearby box elder trees a welcome respite from the dusty road.

Although the paintings of Pictograph Cave were well known to early residents of Billings, the site attracted national interest in 1937 when amateur archaeologists discovered deep deposits of prehistoric artifacts in the cave’s ﬂoor. Within months the Montana Highway Commission acquired the site and a Works Progress Administration (WPA) excavation was underway, directed by H. Melville Sayre from the Montana School of Mines. Sayre documented 106 pictographs inside the cave. The walls were a collage of red, white, and, occasionally, yellow ﬁgures over earlier designs painted in black. Images of coup sticks and warriors in full regalia mingled with turtles, bears, and bison.

Sayre hired Oscar Lewis, an archaeologist from a Glendive WPA crew, to supervise the archaeological excavation at Pictograph Cave. The dig uncovered an assortment of stone and bone tools, projectile points, a carved amulet, pottery shards, and burned bone. The deeper deposits revealed artifacts from the Middle Prehistoric Period (3000 b.c. to 500 a.d.) when roving bands hunted game with stone-tipped spears and atlatl darts but also relied heavily on wild plants and seeds for food. Levels closer to the surface indicated a series of Late Prehistoric occupations (500 a.d. to 1800 a.d.) by nomadic buffalo hunters armed with bows and arrows. Archaeologists discovered a number of perishable items from this period-basketry, a hafted knife, roasted turnips in hearths, and beds of woven twigs and leaves-that would have been lost in an exposed site. Evidence indicated that nomadic hunters abandoned the shelter of the caves in favor of camping in tepees on the terrace below at about the time the horse was introduced on the plains in the 1700s. “The importance of Inscription Cave [Pictograph Cave], archaeologically,” Walter Vanaman, a surveyor for the Montana Highway Commission, wrote in a 1938 report, “is more in the completeness of the picture it presents than in being spectacular in any one phase.”

When the archaeologists began investigating the other caves and the surrounding area, they found that late prehistoric groups had also lived in Ghost Cave. Middle Cave, however, had no evidence of inhabitation. On the terrace below the caves, the crew unearthed historic artifacts and remnants of a prehistoric lodge. They also found the remains of at least nine individuals in and around the caves, including those of one who had been crushed by falling rock. Some human bones had the same burn and teeth marks as bison bones found in the caves, leading to speculations of cannibalism.

National media reports carried news of the excavation, and thousands of tourists flocked to the caves to see for themselves the ancient pictographs and the archaeological operation. Vanaman and others acted as guides, recounting their ﬁndings as they led visitors along newly made trails linking the caves. An unexpected attraction in 1937 was the summer field camp inside Ghost Cave. “I don’t know which was the biggest curiosity to these tourists, the Indian relics and the excavation, or the ‘Cavemen of 1937′ and their home in the rocks. At times they would stand around and stare at us as though we were animals in the zoo,” wrote Vanaman. The following year more than ten thousand tourists visited the caves. A sandstone museum was built below the caves in 1939, and a few years later a concession stand opened.

World War II brought an end to the WPA archaeological excavation at Pictograph Cave in 1941. By that time more than eight thousand cubic meters of dirt had been dug up and sifted and over thirty thousand artifacts uncovered from the distinct cultural occupation levels. Many of the artifacts, as well as field notes and sketches made during the excavation, are now preserved at the University of Montana in Missoula.

After studying the artifacts, William Mulloy, the archaeologist who replaced Sayre as project director in 1940, suggested that the longest occupation at the site was by ancestors of the Crow Indians, who were in transition from an agricultural economy to a nomadic buffalo-hunting culture. Mulloy later used the findings at Pictograph Cave to develop a chronology of prehistoric northern plains cultures, which, for the most part, has withstood the test of time.

In the post-war years Pictograph Cave suffered. Vandals burned down the museum and defaced the pictographs with graffiti. Litter cluttered the landscape, and vegetation choked the trails. In the early 1960s the Billings Archaeological Society and city boosters started a movement to protect and promote Pictograph Cave as a tourist attraction, and in 1963 Billings mayor Willard Fraser signed an agreement with the state to manage and develop the site. Fraser declared Pictograph Cave a city park and spearheaded an effort to have it designated a National Historic Landmark, which it became in 1964. Fraser also established the Indian Caves Commission to clean up the site and design a development plan for the park, but the city council refused to allocate funds for a park outside the city limits and volunteer efforts could not quell the vandalism. In 1968 the federal government threatened to rescind Pictograph Cave’s landmark status due to its continued degradation. The following year the city of Billings surrendered management of the caves to the Parks Division of the Montana Department of Fish and Game, and the site was renamed Pictograph Caves State Historic Site.

The state agency launched a program to improve and protect the park in 1972. Crews built trails, outhouses, and picnic facilities, and they installed interpretive signs, sandblasted away the graffiti that marred the pictographs inside the cave, and took steps to protect the park from further damage. Although the park continued to be a popular local picnic spot, it also began to attract a growing number of tourists. Pictograph Cave became a state park in 1991.

In the years since, growing concern over the loss of pictographs to fading and sloughing has spurred conservation efforts. Studies conducted in the 1990s identiﬁed only 44 of the 106 images that archaeologists recorded in the 1930s. Some have been obscured by a patina of mineral deposits. Others have been lost to erosion, vandalism, and earlier attempts to remove graffiti from the cave walls. The more striking pictographs visible on the cave walls today are a red deer, bear tracks, and shield-bearing warriors. Black images of a turtle, painted nearly 2,050 years ago, and a bison under attack from a wolf are among the older pictographs still visible. A row of coup sticks and a set of seven smoking guns painted in bright red are more recent. Park administrators are currently investigating methods to stabilize the cave and remove the mineral deposits that cloud the pictographs.