Located at Historic Hanna's Town, the Memorial Plaque is typically not shown on tours. The plaque is located on the hill above the Hanna's Town Fort and is easily accessible. There is little known about the origins of the plaque, but it pays tribute to the founding of Historic Hanna's Town and the early settlements of Westmoreland County. 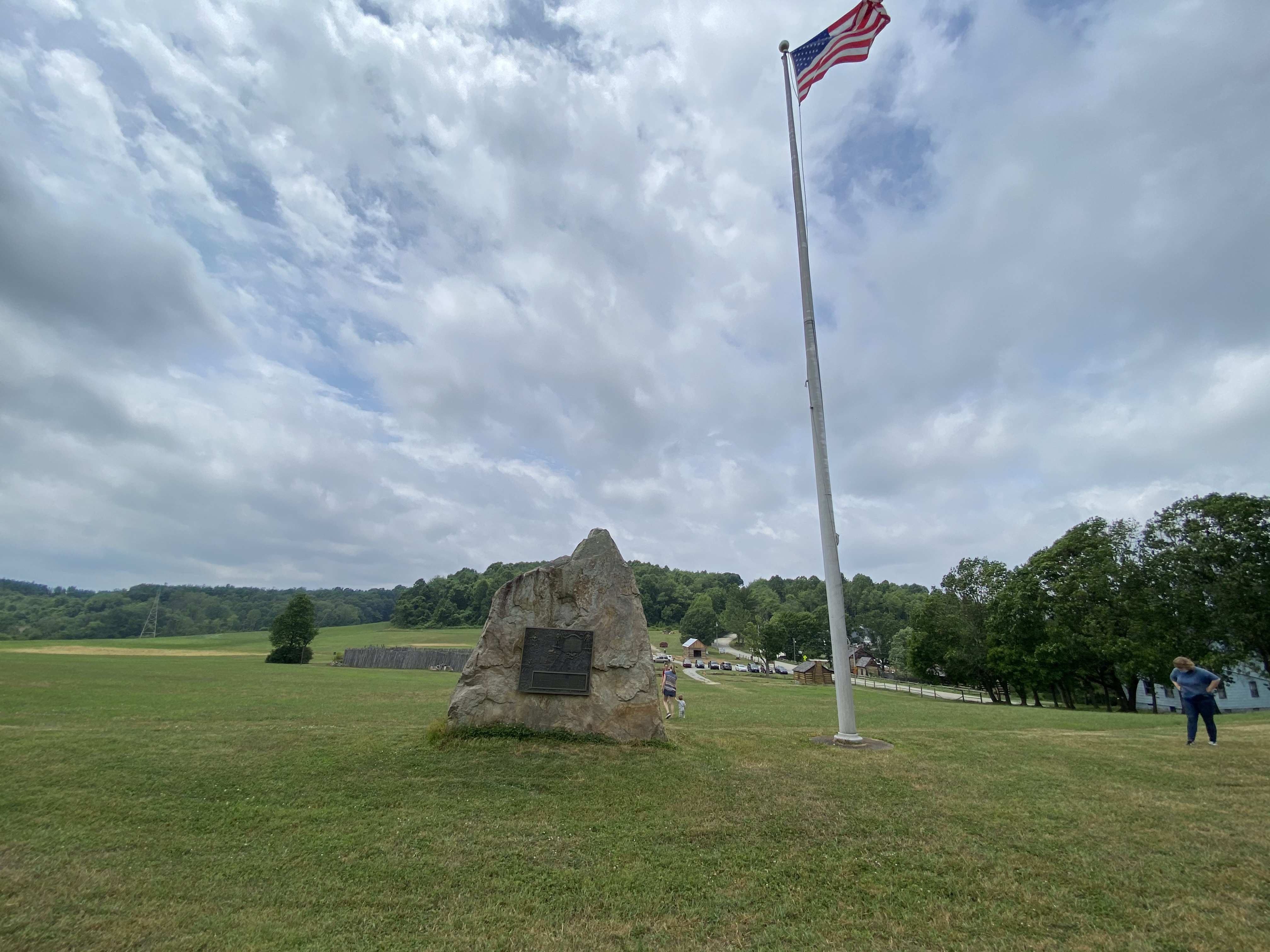 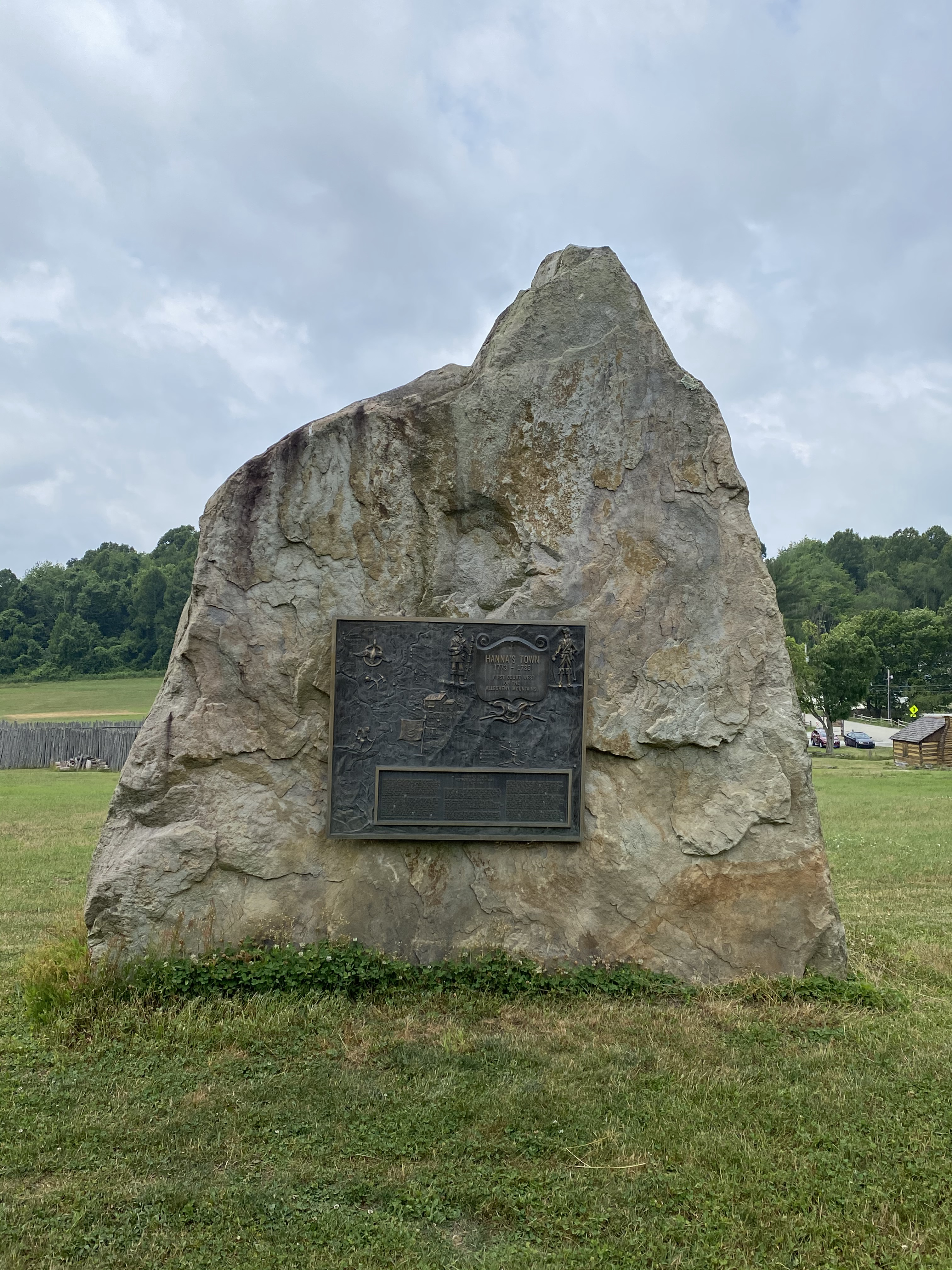 "Early Efforts by the British Colonists in American to establish Fort Pitt at the Point where the Monongahela and Allegheny Rivers joined were foiled by the French. After unsuccessful efforts by Washington in 1754 and Braddock in 1755 to regain the Fort during the French & Indian War, General Forbes built a new road over the mountains in 1758. His army succeeded in ousting the French late that year.

When the Treaty at Fort Stanwix, NY, was signed with the Iroquois Indians in late 1768, it finally paved the way for land ownership by Southwestern PA settlers. This encouraged pioneers to venture westward over Forbes Road. The largest village that developed along that road in Western Pennsylvania was Hanna's Town in 1769. It was named for pioneer Robert Hanna, who operated a tavern at his home. He served as a justice for Bedford County when it was formed in 1771 to include all of Southwestern Pennsylvania.

Westmoreland County was formed from Bedford County, February 26, 1773, and Hanna's Town was chosen as its county seat. First Court Sessions were held at Hanna's House and Tavern, April 6, 1773, for what was the last county in the state formed under British rule and the first west of the mountains in Pennsylvania.

Robert Hanna, born in Northern Ireland in 1736, came to this locale from York County. He secured his tract of land in 1769 and sold off lots in his town plan, Hanna also served as one of the trustees for Westmoreland County Government site selection.

Signed at Hanna's Town, May 16, 1775, were the Hanna's Town Resolves, one of the earliest firm expressions of resistance to English tyranny. After the Revolutionary War erupted, Hanna's Town was the site of area militia musters, usually for defense against recurring Indian raids that plagued the frontier. Robert Hanna served as a Lieutenant of Lochry's Light Horse Militia Company in 1777-78.

In one of the last acts of the Revolutionary War, a group of Indians abetted by British soldiers burned much of Hanna's Town, July 13, 1782, capturing several residents including Hanna's wife and daughter. The devastated village continued to serve as the Westmoreland County Seat until a new commission appointed by the State Government chose Newtown (Greensburg) in 1785.

In poor health, Hanna died in 1786. The community he founded, no longer along a rerouted Forbes Road, faded into oblivion until about 200 years after it was started, when archaeologists and historians began the process of unearthing remains and reconstructing the village."

The Memorial Plaque located at Historic Hanna's Town serves as a reminder of the history of not only Hanna's Town, but Southwestern Pennsylvania as well.