The Providence Children's Museum is the only children's museum in Rhode Island. It offers interactive exhibits and play areas for children ages 1 to 11. It partners with schools in the state, the Rhode Island Department of Education, and education organizations like Head Start, which is a United States Department of Health and Human Services program focused on providing educational and health services to low income families. It has received well over one million visitors since its inception in 1977. 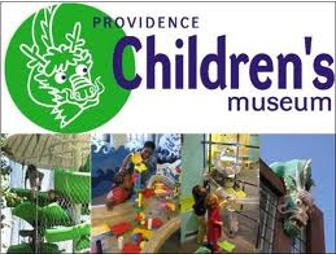 The museum entrance, with the dragon tail above 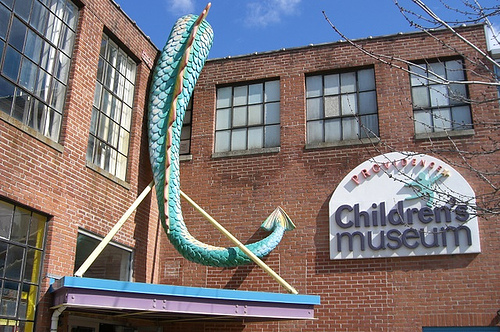 Other side of the building, with the head of the dragon visible 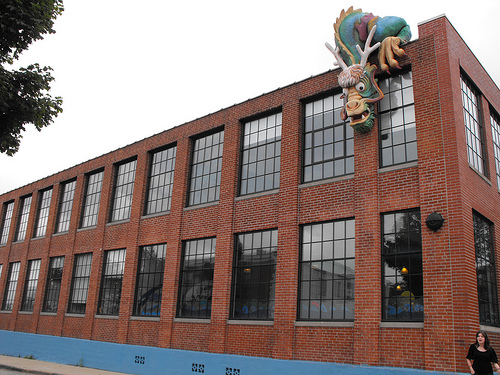 There was a consensus among community leaders in the 1970s for the need to construct a children's museum. Their efforts came to fruition in 1977 when the museum opened in the old Victorian Pitcher-Groff House, which was renovated. A decade later the museum had a full professional staff and saw over 50,000 visitors per year. By the 1990s, it was recognized that a new museum was needed. A factory was bought in the historic Jewelry District of Providence and renovated. It opened in 1997 and added new play areas in 2010.

The museum’s website includes a blog, which provides up to date news on the museum and additional information about museum happenings and exhibits. It also includes human-interest stories about visitors in the museum. For example, a recent article, titled “PlayWatch: Making Tracks” and written by Experience Coordinator Maggie Dawson, describes one visitor, a three-year-old, engaging with an exhibit dedicated to spatial thinking by setting up a long track of blocks across the floor.

During April of 2015, the museum became involved with an ongoing community art project that will continue through the summer of 2015 called “Unicorns in Residence: Providence”. Children and their families can look for this unicorn at parks, museums, libraries, and other local cultural and educational institutions. The museum’s part in this exhibit ended on May 15 and included a glittery phone booth that served as “the missing unicorn hotline” and images of the unicorn at famous places around the world. New York artist Camomile Hixon designed this project. Projects like this are an example of the museum’s commitment to constantly providing new and fun material for children in order to inspire a love of learning and creativity.

Everyday from 9am to 5pm Open select Friday evenings until 8:00 PM Closed Thanksgiving Day and December 24 & 25