First Baptist Church was organized in 1817 by members of the Mount Zion Church in neighboring Mineral Wells. The congregation built its first permanent building--a wood frame building--at 6th and Ann Street. The current building was completed in 1878. The building was added to the National Register of Historic Places in 1982.

First Baptist Church was the site of the formation of the West Virginia Baptist Convention. A sign on the front of the building attests to this historical occasion. 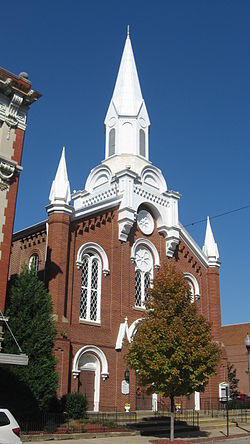 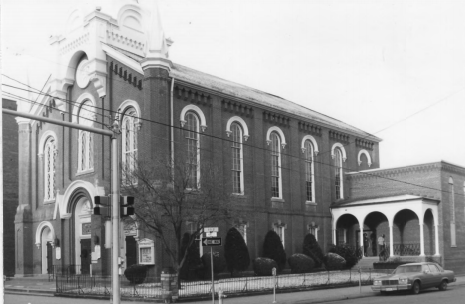 Several families from the Mount Zion Church in Mineral Wells organized the First Baptist Church in 1817. Following several years of meeting in one another’s homes, the first permanent building was built by the congregation. At 6th and Anne Streets the congregation constructed a wood frame building.

The property where the current building sits, on Ninth and Market Streets, was bought by the congregation following the Civil War. Deacon Lysander Dudley was appointed to oversee the building of the church along a similar plan of one he had designed in his hometown of Wallingford, CT. The congregation met for the first time in the new building in 1872 (in the basement) and the

A sign on the front of the building indicates that it was here the West Virginia Baptist Convention was formed.

In 1982 the First Baptist Church was added to the National Register of Historical Places. Architecturally it displays many characteristics of the Italianate style.