Warren Harding Junior High School (Harding Middle School today) saw a student protest against the Vietnam War lead to a landmark Supreme Court case in 1965. In response to the escalation of the war, and in support Senator Robert Kennedy's proposed Christmas Truce, a group of Des Moines students wore black arm bands to school. The administration decided that the students would either have to remove these armbands or face suspension. Mary Beth Tinker, Christopher Eckhardt, and John Tinker believed that the administration's new policy was tantamount to censorship. After they wore the armbands at school once again, each of the students were suspended. With the support of their parents and the ACLU, the students protested the school board's actions in a case that was eventually heard by the Supreme Court.

Mary Beth and John Tinker with their armbands 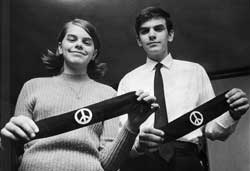 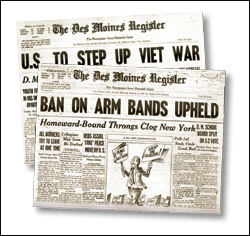 This protest was planned on December 11, 1965 with a group of students at the home of a student named Christopher Eckhardt. These two-dozen students wore black armbands to school on December 16 and 17 and were threatened with suspension if they did not remove these armbands. A district school board meeting which discussed the issue was held on December 21. Two hundred people were in attendance at this meeting. It was decided at this meeting that the decision regarding suspension would be postponed. The students continued wearing the armbands up until January 1, 1966. On January 3, the school board voted to maintain the principals’ punishment.

In March of that year, the Iowa Civil Liberties Union filed a complaint to the US District Court of the Southern District of Iowa on behalf of Christopher Eckhardt and the Tinkers. This complaint claimed that by suspending the students the Des Moines Public Schools had violated their rights under the First Amendment, which protects the right to free expression. The district court dismissed the complaint on the grounds that this suspension was within the school board’s power, as the students’ act of protest was claimed to disturb learning in the schools. The justices at the US Court of Appeals for the 8th Circuit were split, which means that the District Court’s ruling was upheld.

The case went to the Supreme Court in November of 1968, where it was decided in February of 1969 that the Des Moines School District had, in fact, violated the right granted the students under the First Amendment. Today, Mary Beth Tinker is a youth rights activist. In the fall of 2013, Tinker completed a speaking tour with student rights attorney Mike Hiestand. During this tour, they traveled in the United States, across the east coast, Midwest, and southeast speaking at colleges, churches, one youth detention facility, courts, and national conventions.