Jefferson Furnace was established in 1854 and stopped production in 1916. The first stack stood at 40 feet tall and was completed on October 15th, 1854 by a group of Welshmen led by Thomas. T. Jones and John D. Davis. The furnace itself had the capacity to produce 14 tons of iron a day. The iron produced at Jefferson Furnace was sold under the name "Anchor," and the furnace was the main producer of the iron used to build the U.S.S. Monitor, the first ironclad warship utilized by the Union Navy during the Civil War. Jefferson Furnace also produced the iron used in the casting of the seven-ton guns stored at Harper's Ferry. Toward the end World War I, the iron industry in Ohio was on the decline and before Jefferson Furnace was abandoned it was the last charcoal furnace in Ohio. The furnace is now in disarray and faces an uncertain future.

This was one of the last charcoal furnaces in operation in Ohio. 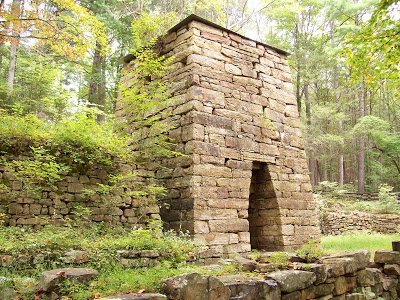 This historical marker was dedicated in 1999. Sponsored by Ohio Bicentennial Commission, The Longaberger Company, The Welsh Societies of Southeast Ohio, and The Ohio Historical Society 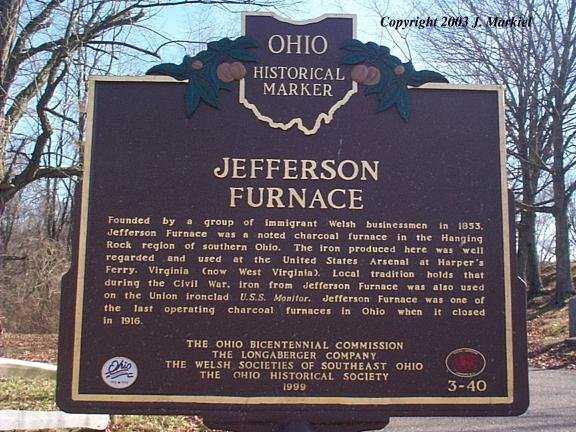 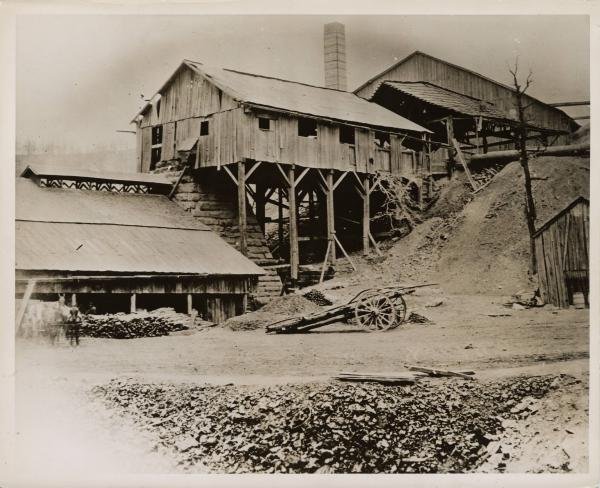 Reproduction of a photograph depicting a crew of laborers at the Jefferson Furnace in Jackson County, Ohio. The crew members are identified as Amos Crabtree, Fred Heading, John Wilson, John Wilson Jr. and Ellory Manring. 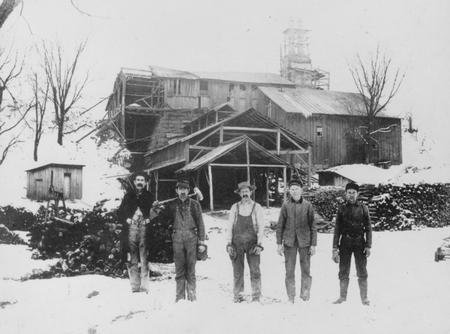 Jefferson Furnace was founded by a group of Welshmen who formed one of the first joint stock companies in order to raise the necessary capital to establish the furnace. There were thirty stockholders, owning 100 shares valued at $500/share, for a total capital investment of $50,000. Management was paid a rate of $500 to $600 a year while the workers were paid $0.80 to $1.25 an hour ($1670-2610/yr, for the current federal standard of 2087 hours in a full-time work year).The furnace did not operate on Sunday, and all Jefferson Furnace officers were required to be of Welsh descent.

One of the founding members and the first president of Jefferson Furnace was Thomas T. Jones, the progenitor of the Jones family in Jackson, Ohio. The Jones family was a major influence on the city of Jackson for the better part of a century, due in large part to the iron industry, which flourished in South-eastern Ohio until the end of World War I.

The last use of the Jefferson Furnace was at 11:40 p.m. on December 26th, 1916, when the final cast was poured. tourists can view what now remains of the Jefferson Furnace at its original location on the edge of Lake Jackson in Oak Hill, Ohio. While very few steps are currently being taken to uphold the furnace, it has a marker proclaiming its historical significance to the village and the nation. While it faces an uncertain future due to its callus neglect, the furnace still stands more or less as it has for many years, now ravaged by weeds causing, along with age, the top layers of bricks to come apart.