Constructed in 1910 by the United Confederate Veterans, this Confederate Monument resembles the memorial arches that later came to represent memorials to veterans of the first World War. The monument is located in the center of the town square and serves as a reminder that Russellville was home to the pro-Confederate shadow government of Kentucky. While the majority of Kentucky political leaders supported the Union and upheld the state government at Frankfort's decision to reject secession, a small shadow government headquartered at Russellville declared their allegiance to the Confederate government in Richmond. The back of the monument reads "Deo Vindice" a Latin phrase meaning "With God our Vindicator."

The Confederate Monument was erected in 1910 and is located near historic Forst House. 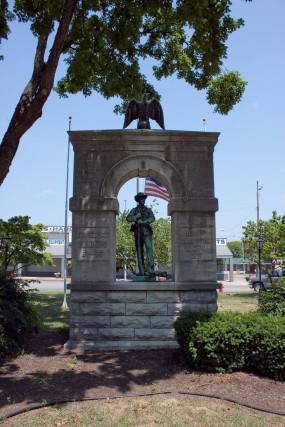 Learn more about the creation of the myth that Kentucky supported the Confederacy in this book by historian Anne Marshall. 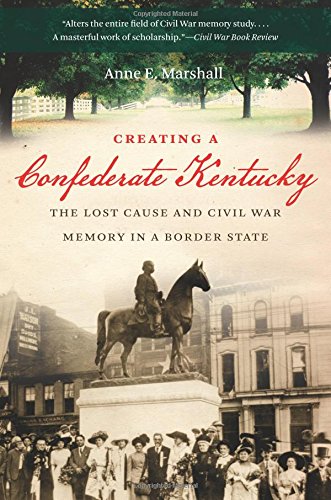 The Confederate Monument was built in 1910 by the Camp Caldwell chapter of the United Confederate Veterans. Despite the fact that the pro-Confederate government had no legal authority and was driven from the state by Union forces early in the war, it is not uncommon for residents of Kentucky to express their belief that the state was part of the Confederacy. This misconception is demonstrated by a local news report in 2017 that reiterates this claim as part of its defense of the monument despite racially-motivated violence by defenders of other Confederate monuments.

The monument features a block arch atop a pedestal, with a bronze eagle measuring two feet high and long, on top of the monument, and a Confederate soldier statue inside the arch. The base is six feet tall, constructed of limestone bricks. The arch is made of limestone, and the soldier statue, portraying a Confederate soldier wearing a slouch hat and holding a rifle, is made of bronze. On the back of the monument are the words Deo Vindice, which mean "With God our Vindicator" in Latin.