Before 1850, when Congress barred the slave trade in the District of Columbia, slave pens and auction blocks were a common sight in the Nation's capital. In fact, Washington had over a dozen slave pens, jails, and markets where people were bought and sold. Williams Slave Pen, also known as “The Yellow House” was one of the most notorious slave pens in the region, and operated both as a prison and an auction house. Solomon Northup, a free Black man living in New York, was captured in 1841 by slave traders pretending to be employers. These men drugged Northup and sold him to the proprietors of this slave pen who later sold him to slave traders from New Orlean.s Northup escaped twelve years later and his story became a best-seller and the inspiration for the movie "Twelve Years a Slave." Some historians who have studied maps of the city and the contemporary accounts believe that the Yellow House was located where the Federal Aviation Administration headquarters is located. Others place the slave pen at two other locations along what is now the National Mall. Although it is impossible to determine with certainty that this was the location as this and several other slave pens were often referenced together, it is important to note that Solomon Northup and thousands of others were bought and sold in the nation's capital prior to 1850.

The Yellow House was one of the most notorious slave pens in the city. This abolitionist broadside hoped to highlight the tragic irony of the slave trade being conducted in the nation's capitol. 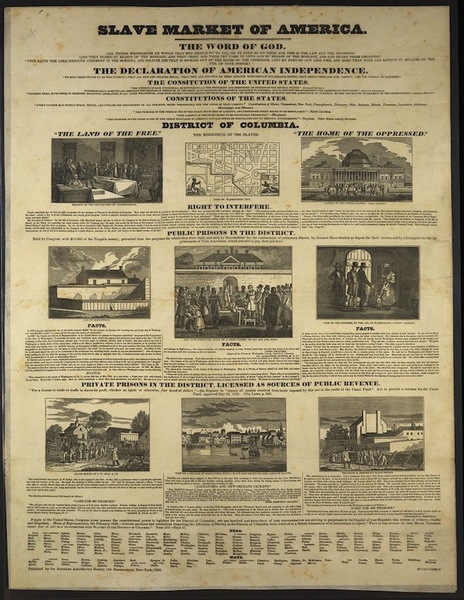 The Yellow House was the point of transition from freedom to slavery for many escaped slaves, as well as free men and women of color who were kidnapped illegally by men who claimed they were runaways. Men, women, and children were held in this jail under horrific conditions pending their sale various areas of the South. Until Congress banned the sale of slaves (but not slavery itself) within the city limits, Washington had many slave pens “within the very shadow of the Capitol.”

William H. Williams owned the Yellow House, a slave pen described as a three-story brick dwelling, covered with plaster, painted yellow and standing within viewing distance of the Capitol. The precise location of the “Yellow House” is difficult to discern. In 1850, Smithsonian regent Jefferson Davis, remarked of this structure, "It is the house by which all must go who wish to reach the building of the Smithsonian Institution." As a result, it would have been located somewhere between 7th and 8th Streets, just south of the Smithsonian Institution grounds.

Proprietor William H. William's firm owned and operated two slave-trading ships, the Tribune and the Uncas. The broadside featured on this page shows images of the Yellow House and other slave pens in Washington and Alexandria. The top of the abolitionist broadside shows two contrasting scenes. The first depicts a reading of the Declaration of Independence under the caption "The Land of the Free." The second shows slaves being led past the capitol with the caption "The Home of the Oppressed."