Completed in 1897, this Richardsonian Romanesque campus building served as the main library for the University of Illinois at Urbana-Champaign (UIUC) until 1927. After serving as the home of the law school for several decades, the building became the home of the mathematics department in 1955 and continues to serve that function today. The building is best known for its bell tower, which was added in 1920.

Altgeld Hall's bell tower provides weekly concerts by a live chimemaster. The playing of these bells are one of the most beloved traditions of the University 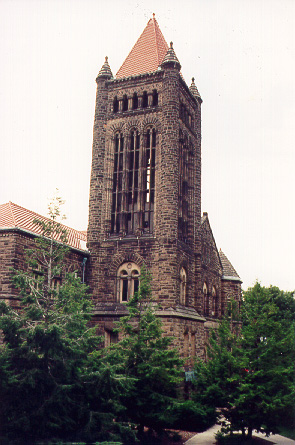 The building is named for Illinois governor John Peter Altgeld, born in a German village in 1847. He came to the United States with his parents as a baby and grew up on an Ohio farm. While a teenager during the Civil War, he joined an Ohio infantry regiment, before returning to school and becoming a teacher. He then studied law and eventually moved to Chicago to further his career.