The small town of Bramwell was home to many of the leading coal barons and remains a tourist destination for those who enjoy driving through its many streets filled with Victorian mansions and historic buildings along the Bluestone River which surrounds the town in a horseshoe fashion. In the early 1800s, the town was known as Horseshoe Bend before it was named in honor of Joseph H. Bramwell, a New York civil engineer and the local Flat Top Company superintendent. Bramwell was the business and residential community for Pocahontas coalfield owners and operators such as J.H. Bramwell, I.T. Mann, Edward Cooper, Philip Goodwill, John Hewitt and William Thomas until Depression ruined economy. Joseph H. Bramwell came to the area seeking fortune that would be found within the area. That fortune would eventually become the Black Gold of Appalachia. In 1873, West Virginia coal fields started in Bramwell and extended over forty miles.

Bramwell in the early 1900s. The Pocahontas coalfields led to the growth of Bramwell as the region's natural resources supported jobs for tens of thousands of miners. 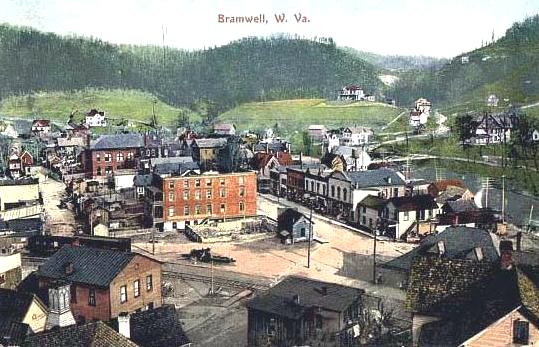 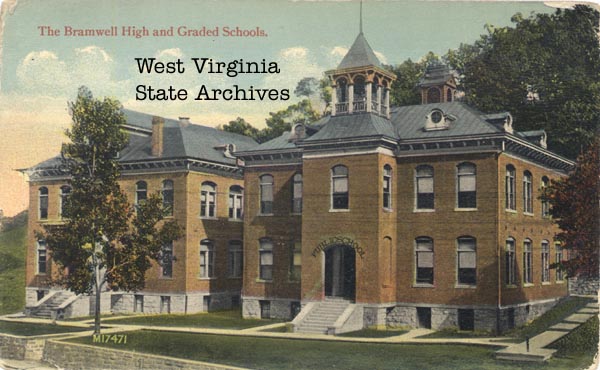 This historical marker is about a mile south of the center of Bramwell at the intersection of Coopers Road and Pocahontas Road. 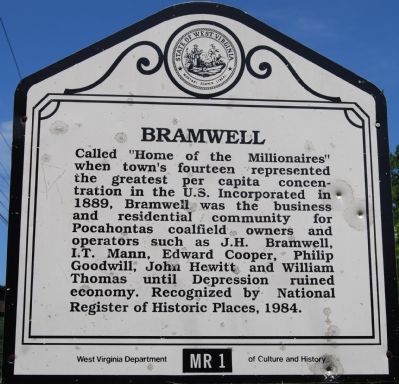 In the 1880s, word began to spread of the abundant seams of coal within the area of Bramwell. Soon this area of West Virginia experienced an influx of population as dozens of investors and thousands of workers came to the region from Northern cities and Southern agricultural areas. These white and Black Americans arrived alongside many immigrants from England, Scotland, and Wales.

Joseph H. Bramwell created the Bramwell Bank, known today as the Historic Bank of Bramwell. With the arrival of wealthy investors and creation of several banks, the city of Bramwell soon became the financial center of southern West Virginia. Bramwell's bank is believed to have the largest sum or money compared to the overall population of in the history of the United States. As Bramwell's population rose to four thousand, Victorian mansions were constructed on hilltops overlooking the river.

Bramwell is famous for having the largest number of millionaires per capita of any town in America in the late 1800s. At its peak, Bramwell  had as many as fourteen millionaires living in the city. The Pocahontas coalfields led to the creation of jobs for tens of thousands of miners. Immigrants and African American miners worked alongside native-born whites with some degree of cooperation as well as racial conflict.