The Peninsula Python is a part of the historical lore of the village on Peninsula Ohio. During the summer of 1944, the townspeople reported multiple sighting of what they though was a python that had escaped from a traveling circus. Although attempts were made to capture the snake, it was never found. The story did, however, receive national news attention, and is fondly retold by those living in the area.

A mural depicting an aerial view of the Cuyahoga River on the front of the Peninsula Library. Some think it is also a reference to the Peninsula Python. 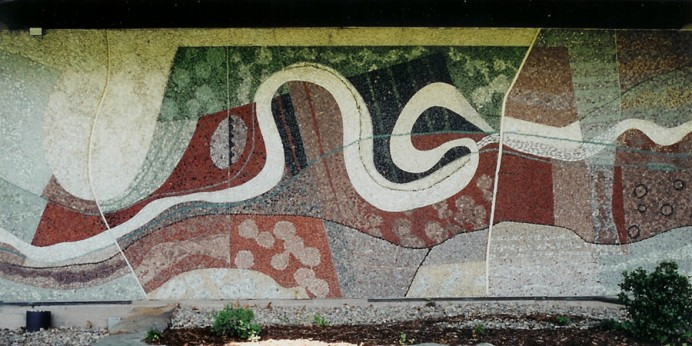 The Cuyahoga River takes many twists and turns as it flows north toward Lake Erie. Along the bank of one of these twists is the village of Peninsula, Ohio. For the most part, the town has been a quiet village in a largely rural area between Akron and Cleveland. This calm was overturned during the summer of 1944 when there was a general panic created by multiple sightings of a rouge python.

The first mystery in this story is how a pythons, a nonvenomous snake typically found in Africa, Asia, and Australia, would find itself in the temperate climate of northern Ohio. Some suspected that the snake escaped from a circus that had been in the area during the previous month. Others suspected that the snake was lost from a carnival truck crash in 1942.

Clarence Mitchell was the first to report the snake. “He was thick as my thigh … and every bit of fifteen feet long – more like eighteen – sort of brownish spotted. I went over and looked at the track. It was like you’d rolled a spare tire across my field.” (Bordner, 1945)

Later the Sazlay brothers reported seeing a similar track when they were preparing a field for planting corn. This siting was followed two days later when Mrs. Vaughn spotted the snake, “I was up in the second floor of my hen house and looked out into the yard in back. Right there as a great big snake trying to get through the woven wire fence, but he had lump in him bas as a basket, and the lump wouldn’t go through the fence. He reared up and climbed right over the top of that wire fence – three and a half feet height.” (Bordner, 1945)

Knowing the snake was a threat to the wellbeing of the citizens and livestock of Peninsula, groups of men developed schemes to apprehend the dangerous intruder.

Dud Watson recommended making a large box with an eight inch hole and bating it with a chicken. The undigested chicken would keep he python locked in the box.

Thus informed with these and other schemes, Chief of Police Huey led a posy of men and boys determined to capture the menace. By chance, they were joined two companies of militia who were engaged in practice drills unrelated to the reptilian intruder. Despite the good weather and ample team of hunters, the snake was not to be found.

Random sighting of the python’s existed persisted during the remainder of the summer. Mrs. Boroutick told others, “I want out back of the house to throw some trash into the river (the Cuyahoga) and just as I turned to come back there was a crash in the butternut overhead. I turned just as the big snake fell with a thump not ten feet from me.” (Bordner, 1945)

As the summer transitioned to fall, sightings of the python faded. By then, however, the story of the Peninsula Python had become national news.

The story remains a part of the lore of the village.