This area was discovered by Ponce de Leon in 1513. The Dry Tortugas were named after the large population of sea turtles living in the island's surrounding waters. Tortugas means turtles in Spanish, and at the time there was an abundance of sea turtles living in this area. So, where does the title Dry Tortugas come from? Dry was later given to the island to indicate to other mariners that the land mass lacked fresh water, which was an important detail for sailors to be aware of. Around this area there are many treacherous reefs, and in 1825 a lighthouse was built on Garden Key to warn ships and guide them toward safety. Though, there was still an abundance of shipwrecks, some dating back to the 1600s! The Dry Tortugas currently has one of the highest concentrations of shipwrecks in North America. In 1846, the U.S. began construction on Fort Jefferson, because of these large reefs surrounding the Tortugas this would establish one of the most strategic harbors in U.S. history. The design of the fort called for a three-tiered six-sided 420 heavy-gun fort, with two sides measuring 325 feet, and four sides measuring 477 feet. This fort was designed to be a massive gun platform, and would be able to destroy any enemy ships that came in range of its powerful guns. During its peak years it held nearly 2,000 people. Although it never had to defend it in battle, it was used during the Civil War as a prison for Union criminals and other undesirables. It became known as America's Devil Island, the most famous inmate being, Dr. Samuel Mudd. He was exiled for life to the Dry Tortugas for healing John Wilkes Booth broken leg just a few hours after the assassination of President Lincoln. Dr. Mudd was eventually excused by President Andrew Johnson for his efforts in fighting an outbreak of yellow fever at the fort. In 1888, the Army handed to fort over to the Marine-Hospital Service to be used as a quarantine station. Then, on January 4, 1935, President Franklin D. Roosevelt designated the area as Fort Jefferson National Monument. In 1992 it was finally upgraded to a National Park by President George Bush. 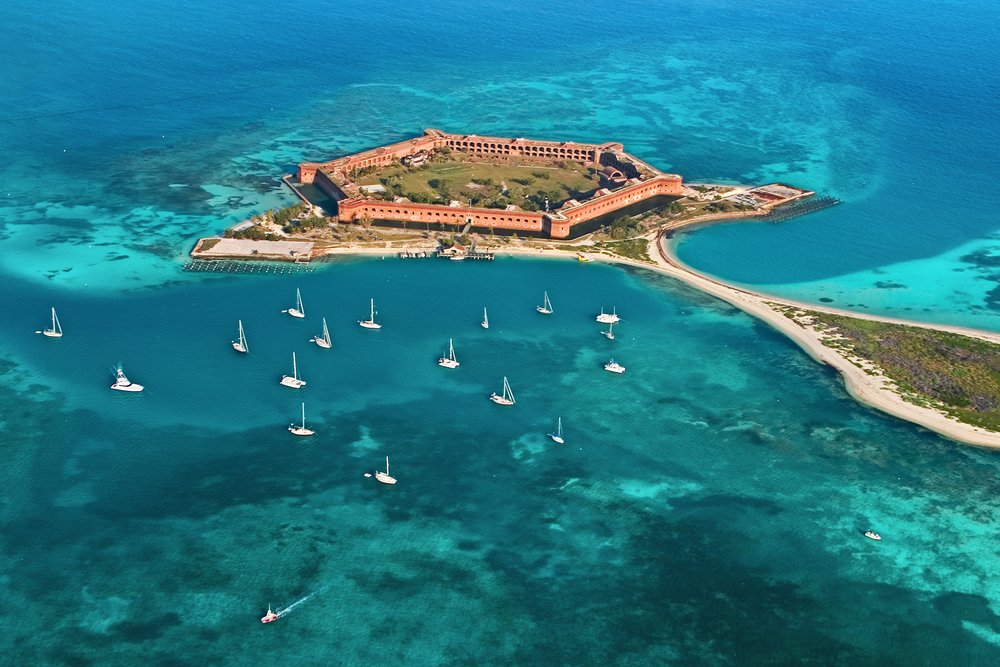