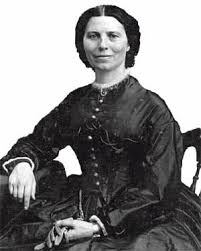 The original sign of Clara Barton Missing Soldiers Office, one of over a thousand artifacts discovered when the third floor room was reopened in 1996. 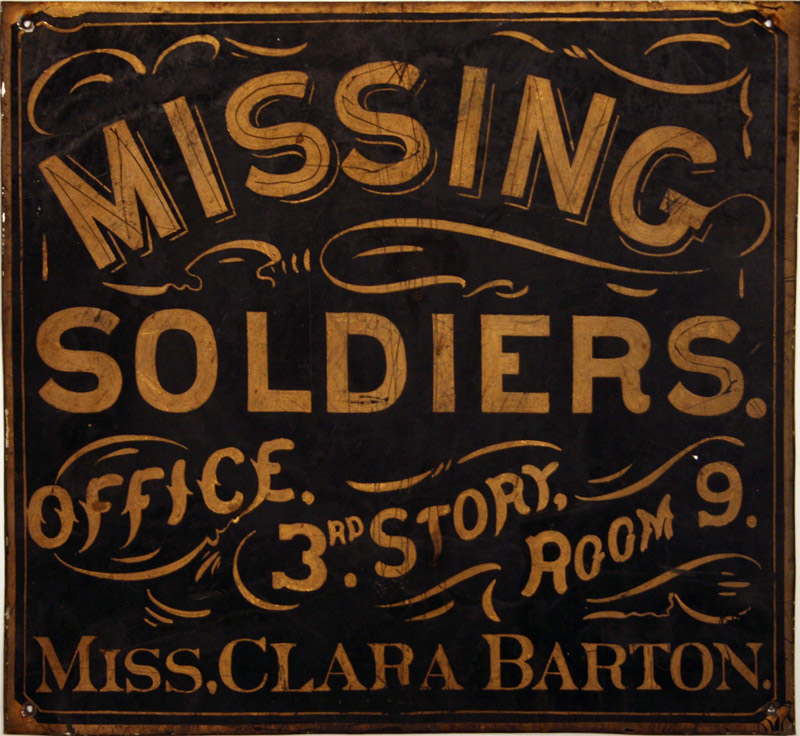 Known as "the Angel of the Battlefield," Clara Barton's work embodied the true spirit of humanitarianism. Her legacy at the Missing Soldiers Office Museum shows her dedication to ensuring the well-being of others.

Born in Massachusetts on Christmas Day, 1821, Barton's first career was as a teacher. At the time, nursing was considered a man's profession while teaching was a woman's. She demonstrated care through others in her teaching, establishing a school for the children of mill workers in Oxford, Massachusetts, and the first free public school in Bordentown, New Jersey. Yet she left the profession after being told that instead of running the school herself, it should be a man's job.

Barton first came to D.C. when she worked in the U.S. Patent Office, located in what is now the National Portrait Gallery building. She was one of the first women to work in the federal government and struggled to hold her status. She briefly returned to Massachusetts before moving back to D.C. in 1861, when she moved into the boarding house that is now the museum.

With the outbreak of the Civil War in 1861, D.C. became a political and military battleground for saving the Union. After the Baltimore Riot in April 1861, in which the first deaths of the war occurred, Barton instinctively received and cared for wounded soldiers of the 6th Massachusetts Infantry sent to D.C. As the war progressed, Barton made it her mission to ensure soldiers had proper access to healthcare. Barton became an important point of contact for getting supplies to Union soldiers, with members of the general public, aid societies, and politicians sending her bandages, food, and clothing to redistribute at battlefields and camps. She responded to battles including the First and Second Battles of Bull Run, Cedar Mountain, Antietam, Fredericksburg, Petersburg, and Cold Harbor.

While thousands of soldiers lay in field hospitals, there were also thousands of soldiers who went missing. Some of these soldiers were unidentified dead, while others were still alive but their families could not locate them. As the battles ended in early 1865, Barton received official government correspondent status from President Abraham Lincoln to begin her search for missing soldiers. She had seen the dire conditions of freed Union soldiers returning from Confederate prisoner-of-war camps. She hired staff and opened the Office of Correspondence, also known as the Missing Soldiers Office, with the Friends of the Missing Men of the United States Army. Barton took up the cause of grieving parents, friends, and family whose relatives and neighbors were missing at the end of the Civil War. Barton and her team responded to over 63,000 letters, some that required research that lead to publishing "Rolls of Missing Men," lists of names of soldiers who loved ones inquired about. 22,000 missing men were identified, 13,000 of whom were at Andersonville Prison in Georgia. With support from Congress, Barton's office remained open until the end of 1868.

After the Missing Soldiers Office closed, Barton traveled to Europe where she encountered the International Red Cross. When she returned home, she established the American branch of the Red Cross in 1881. Barton continued responding to humanitarian crises across the United States until her death in 1912 in Maryland.

The Missing Soldiers Office was rediscovered in 1996 when General Services Administration staff member, Richard Lyons, found an envelope jutting from the ceiling of the building. The third floor had remained a time capsule from Barton's time, sealed in the early twentieth century in response to newly-established fire codes. The discovery naturally led to the establishment of a museum to preserve the Missing Soldiers Office. The museum, in partnership with the National Museum of Civil War Medicine in Frederick, Maryland, honors Clara Barton's tireless work. Other sites associated with Barton include the Clara Barton National Historic Site (her home in Glen Echo, Maryland) and the Clara Barton Birthplace Museum in Oxford, Massachusetts.