Native Americans who lived near this site believed that the water from the local spring had spiritual healing powers. They also believed that the land was sacred and inhabited by powerful spirits. Today, visitors still travel great distances to drink water from the artesian wells of the Healing Springs. Tales of the springs’ healing powers began during the American Revolution. For example, one legend suggests that four British soldiers who were badly wounded in a battle near Windy Hill Creek were rescued by Native Americans and taken to the springs. After drinking the water, the legend continues, the once mortally-wounded men were healed. 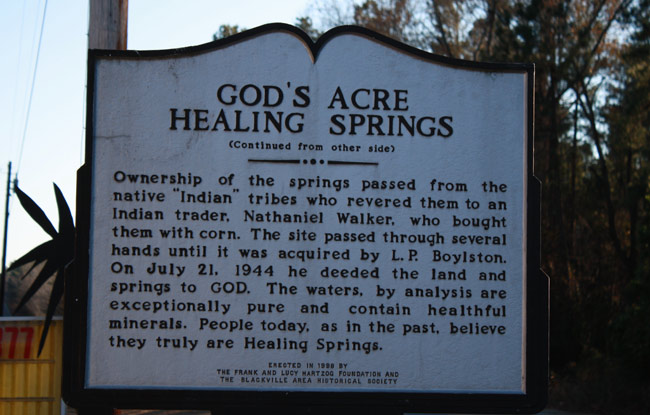 Healing Springs, A History of the Springs and Surrounding Area by Raymond P. Boylston, Jr.-Click the link below for more info about this book. 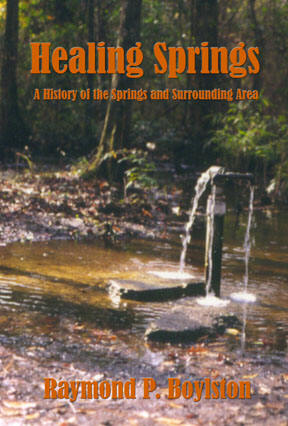 The Revolutionary War soldiers who drank from these waters returned to their posts, telling others of the spiritual healing power of the well. The springs were formed during the formation of the Appalachian Mountains. Throughout the years, mountain water gathered, flowing under a solid layer if rock increasing its pressure towards the ocean. Being utilized by birds and other animals drinking from the newly developed springs, Indians, at the time followed these trails and began to settle in the area.

After Native Americans were compelled to sell this land, it became part of Nathaniel Walker's estate. It later became the home of one of the first churches along the South Edisto River that would later be known as the Healing Springs Baptist Church. In 1944, the church sold the land to Mr. Lute Boyston. Learning of the history of the area, Boyston decided to “deed” the land to God and declaring that everyone could enjoy a drink from the springs without charge. To this day, people from all over the world travel to Blackville to visit the springs.