Nestled in the middle of dairy country in Sussex, New Jersey, Space Farms Zoo and Museum features a wide variety of both exotic and domestic animals as well as a variety of exhibits showcasing Americana culture. With over 500 animals across 100 species, including the largest private collection of North American animals in the United States, Space Farms endures as the area’s premier family-owned and regulated zoo. Dating back to 1927, the farm and museum includes over 100 acres of peaceful countryside ideal for a sunny afternoon picnic or family playtime. Whether roaming with a variety of free-range chickens and ducks or gazing upon exotic animals from the far reaches of the Earth, Space Farms Zoo and Museum stands as the educational experience for animal lovers and explorers alike. 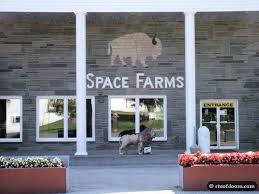 Male and Female Lions at the Zoo 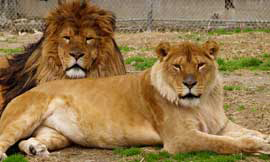 Historic Country Store at the Museum 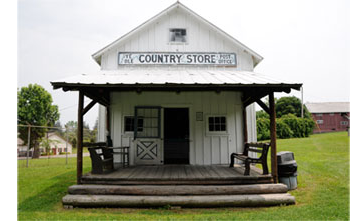 Space Farms traces its history to 1927 in the countryside near Sussex, when Ralph and Elizabeth Space purchased a quarter-acre parcel of land that featured a small general store, repair shop, and wild animal shelter. As native farm people, Ralph Space ran the repair shop while Elizabeth headed the general store, and to supplement the family income, Ralph Space began trapping predatory animals for the New Jersey State Game Department.

Instead of killing the animals and selling their furs, Ralph built small enclosures around his garage. Soon, people from the community heard about his wild animal collection and they would drive out to the repair shop and general store to see the critters. Over the course of the 20th and 21st centuries, the Space family continued acquiring new animals for their collection, and Space Farms has grown into one of the largest private collections in the world.1

The most intriguing and popular aspect of Space Farms is its massive zoo that features more than 500 live animals covering over 100 species. Throughout the multi-acre premises, visitors can discover bobcats, tigers and lions, various foxes, yaks, snakes, monkeys, hyenas, leopards, timber wolves, and many others.

Furthermore, Space Farms has contributed to several world records, including life longevity records for a bobcat, jaguar, and puma. Although now stuffed and displayed at the front of the museum, Goliath the bear was known as the biggest bear in the world at 2,000 pounds and standing over 12 feet tall. Goliath lived at Space Farms from 1967 to 1991.

After visiting the playful and exciting animals in the zoo portion of Space Farms, visitors can take a step back into history and browse through 11 historic buildings that contain thousands of items unique to American history. The museum includes over 50 antique cars and motorcycles, an eskimo exhibit, an old-time Blacksmith shop, and even a doll collection that the Space’s started over a century ago.2

When visiting Space Farms Zoo and Museum, keep on the lookout for special events and activities, which are held from April to August. For example, Space Farms hosts snake handling demonstrations and carnivore feedings during Memorial Day Weekend, while in late August, the farm hosts Teddy Bear Day, where children get free admission if they bring a teddy bear.3