General Logan may be one of the most important but forgotten men of the 19th century, but in Murphysboro, the place of his birth, his story is remembered. In fact, it was General Logan's parents, Dr. John and Elizabeth Logan, who first founded the town of Murphysboro with a gift of 20 acres in 1843. The museum commemorates and displays the tales of Logan's impressive feats during the Civil War, but what makes Logan most memorable is not those feats--it's his change from a racist politician actively pursuing laws to restrict African Americans to, at his death, a Republican presidential candidate backed by Frederick Douglass. The museum explores all these complexities and invites the visitor into understanding this historic period and the way a person can (and did) change.

The General John A. Logan Museum is located within the Christopher C. Bullar House. 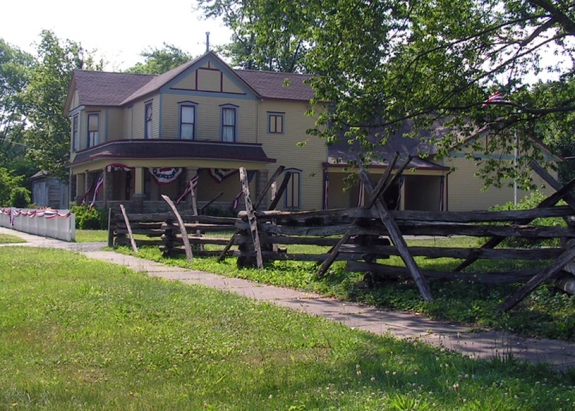 Southern Illinois was originally "Southern" in more ways than one. The area commonly referred to as "Little Egypt" was primarily settled by farmers from the South, and though geographically distant from "the South," it maintained many aspects of Southern culture and thought. Thus, it would have been no surprise that a young man, such as John Logan, raised in Southern Illinois, would have internalized the community's views of things such as race and slavery (even as the state was gaining recognition for another politician named Lincoln).

When in 1852, Logan was elected to the Illinois House of Representatives, where he spearheaded and won the campaign to create the state's harsh "Black Codes," which made it difficult for African Americans (freed or runaway) to move to the state. No African American from another state could even remain in Illinois for longer than ten days. Moreover, African Americans assembling in groups of three or more were subject to floggings or jail. They could also not testify in court in the case of any dispute.1

However, when the Civil War began, Logan surprisingly rallied the Southern Illinois population toward the Union side, despite talks in "Little Egypt" of even joining the secession. Logan was key in bringing the area into the Union side.

Logan's feats as a General in the Union Army are impressive, but equally impressive is a change that occurred. When Lincoln began campaigning for his second term, Logan supported him as fiercely as he had once opposed him. Following the war, Logan was far from the Southern Democrat he once. As a Republican, he began to push for Black rights, such as the right to hold public office, the right to vote, and the right to a formal education. He eventually sought the Republican presidential candidacy, backed even by Frederick Douglass. However, his unexpected death on December 16, 1886 never allowed him to begin that campaign.