You are vieweing item 1 of 2 in this tour.

The Thomas Paine Monument, originally designed by preeminent sculptor John Frazee as an architectural column of Tuckahoe marble, was first dedicated on November 9, 1839. On the monument, Frazee carved a profile of Paine enclosed in a wreath on one side, and covered the surfaces of the remaining sides with quotations from Paine's writings. 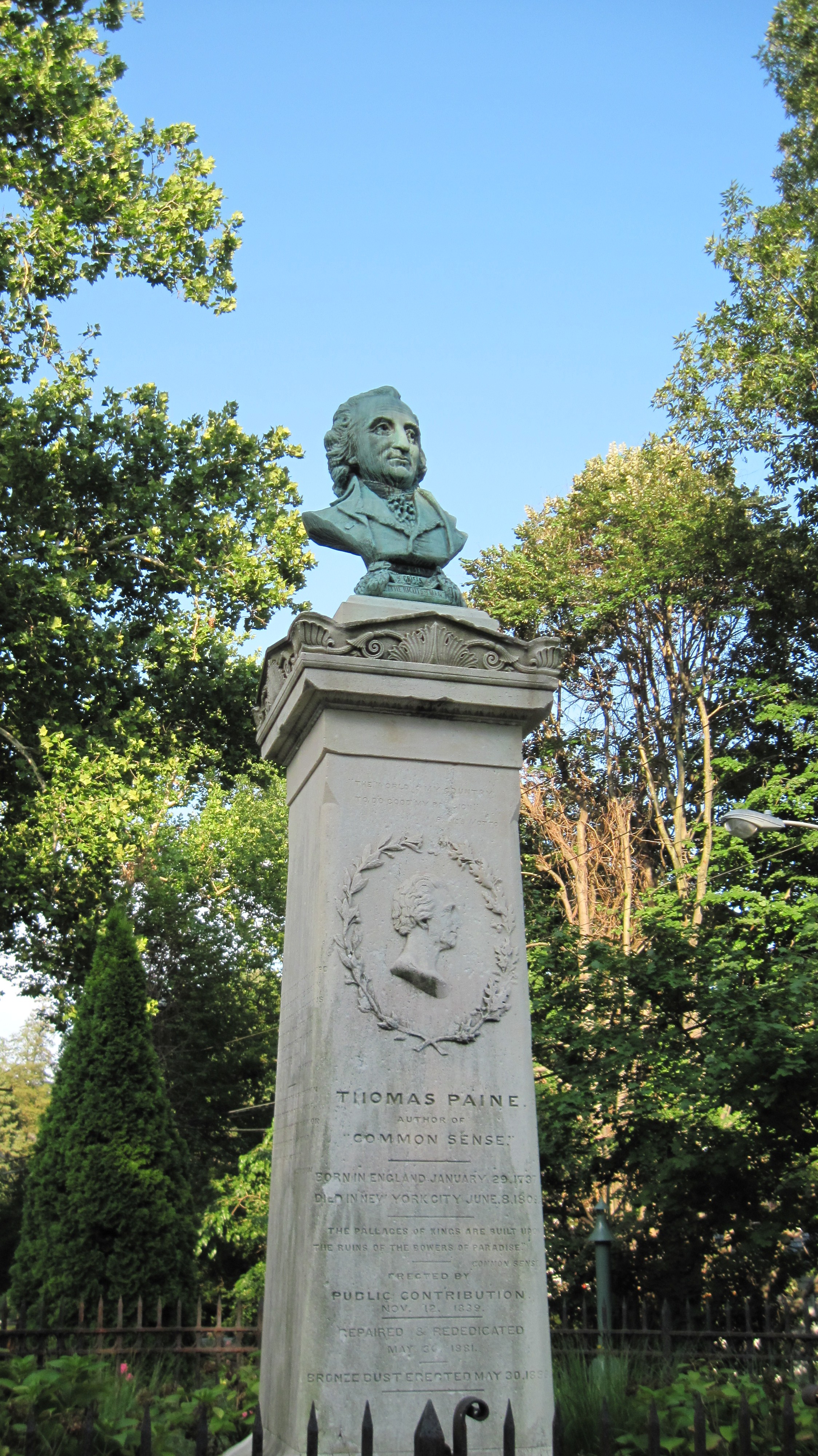 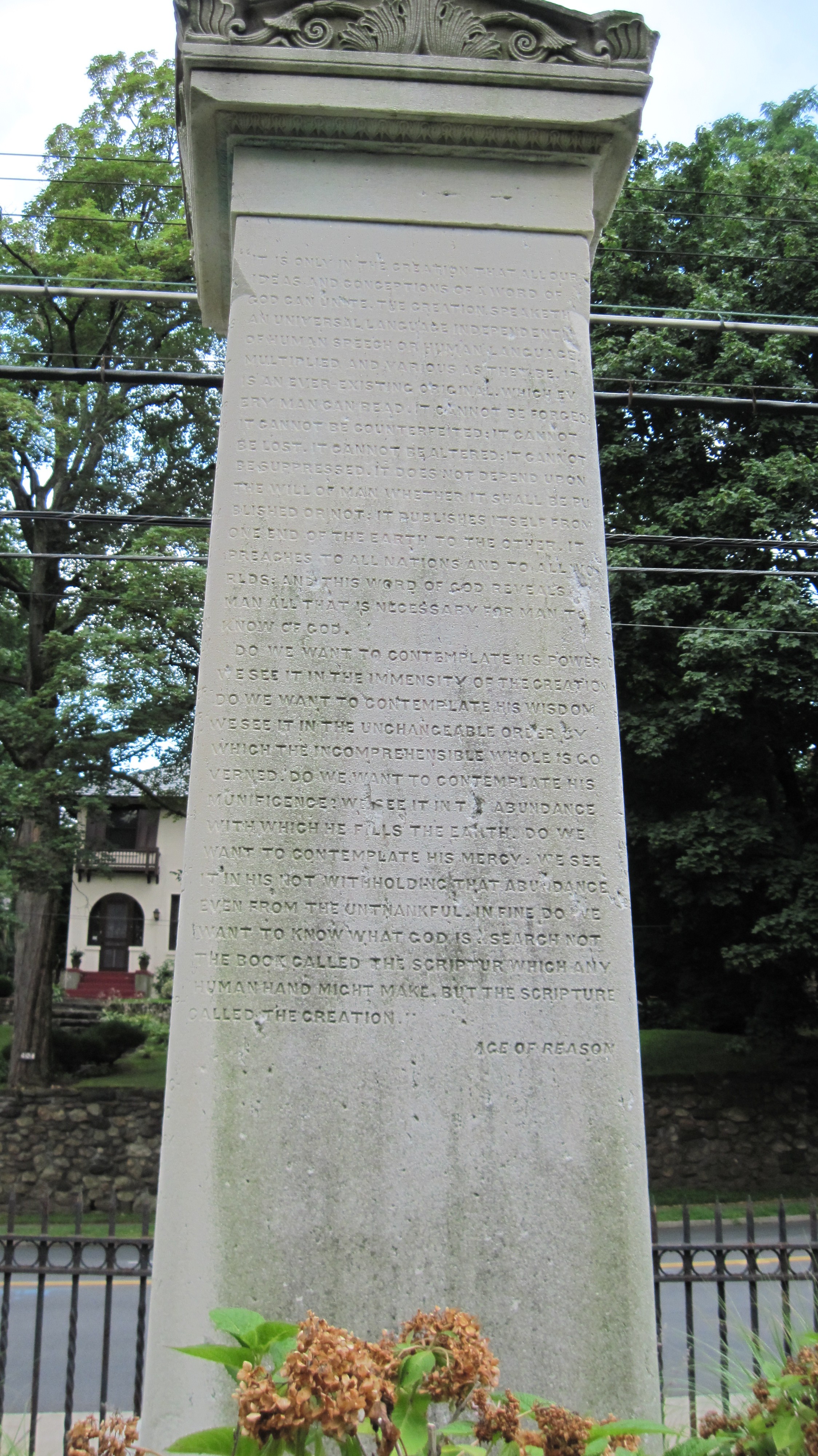 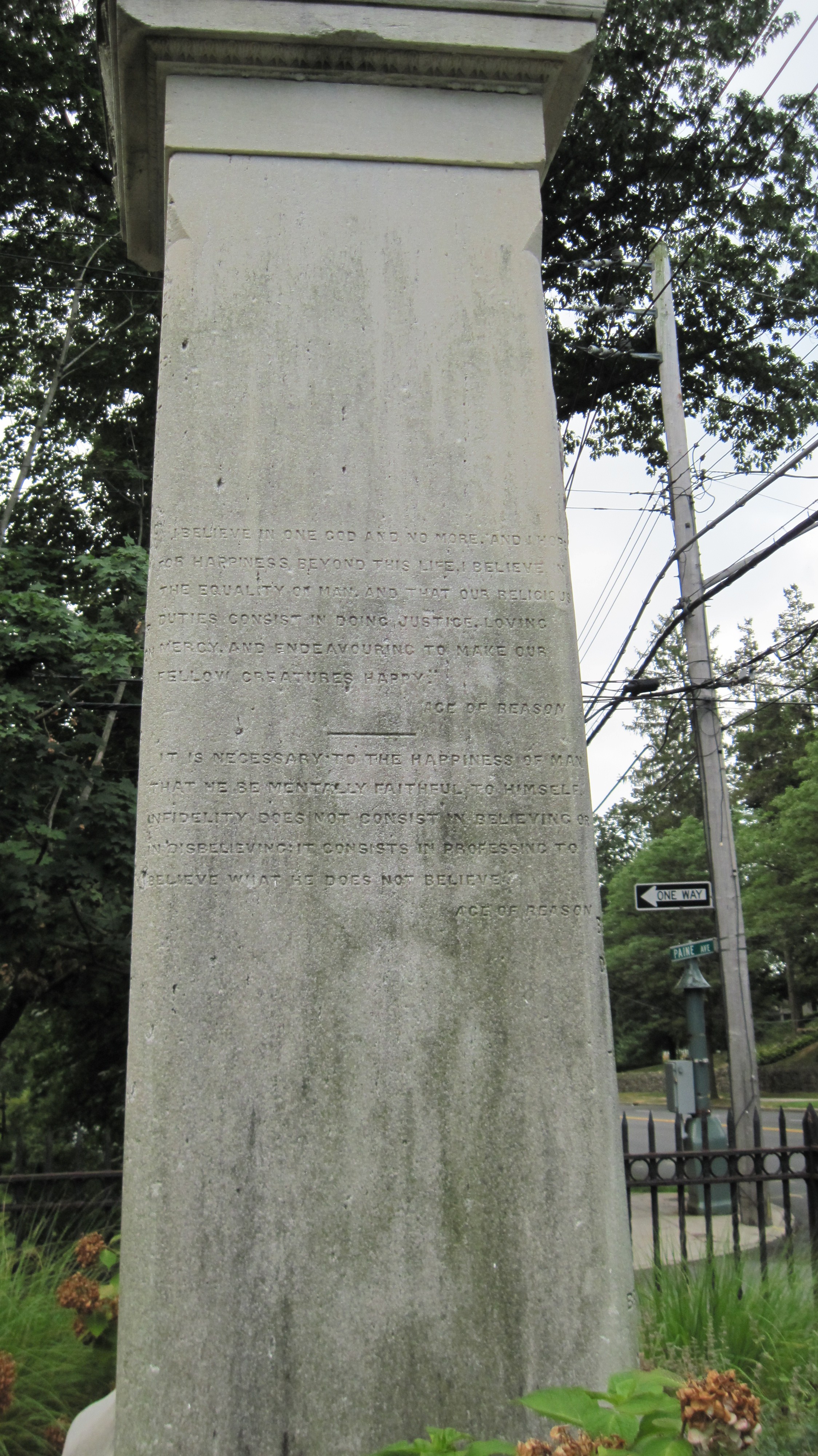 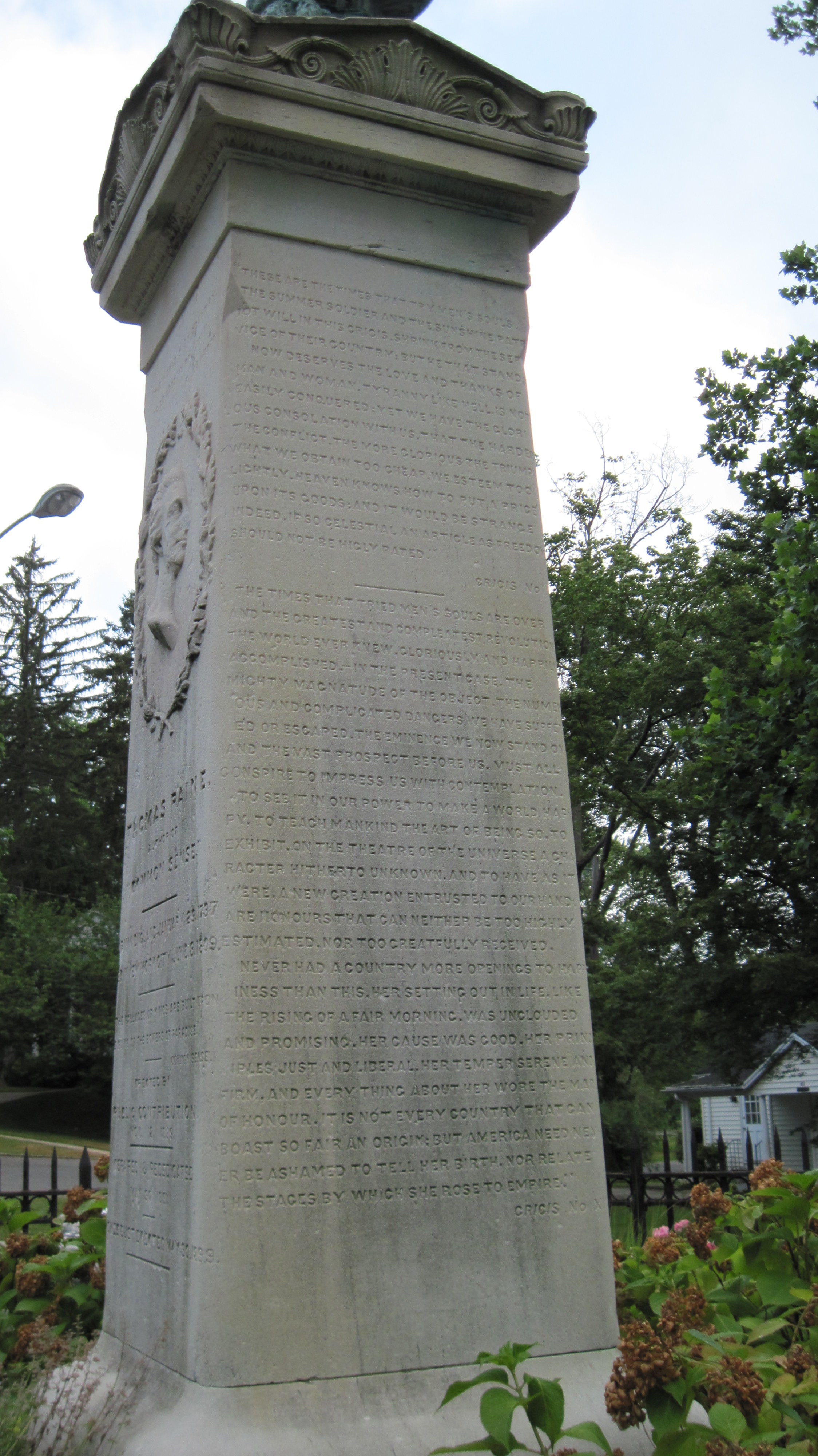 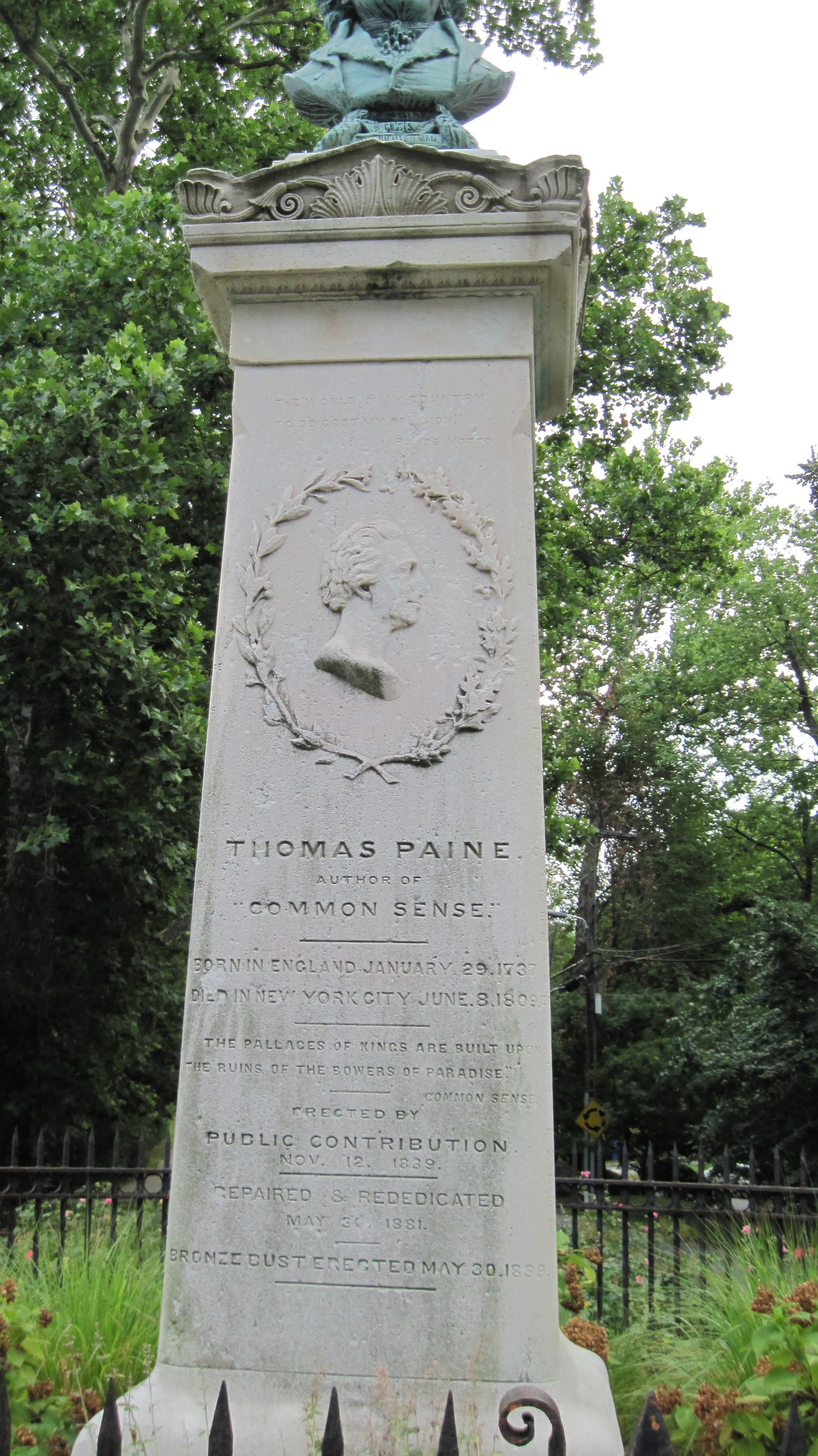 John Stark Frazee (1790 - 1854) began his career as a bricklayer and became a sculptor through his carvings of memorials and tombstones. In the 1920s he gained a national reputation, having been commissioned by the Boston Athenaeum to create a bust of John Jay and, later, of John Marshall, Daniel Webster, and other famous Americans. He was the only sculptor to be a charter member of the National Academy of Art, and was commissioned by President John Tyler to be the supervising architect of the unfinished New York Customs House.

Frazee and Gilbert Vale, editor of The Beacon, raised the $1,300 necessary to create the monument. The sculptor took no payment for his work. In 1881 the monument was repaired by the Liberal Club of New York City, and was rededicated on May 30, 1881.

The bust of Thomas Paine was commissioned by the New Rochelle Historical Association and completed by sculptor Wilson MacDonald in 1899. (James) Wilson Alexander MacDonald (1824 - 1903) began his artistic career at the age of 30, when he created a sculpture of Thomas H. Benton, a U.S. Senator from Missouri. After settling in New York City in the 1860s, he immersed himself in artistic circles and gained prominence with statues of Edward Bates, Lincoln’s Attorney General, and a bust of Washington Irving, which stand in Prospect Park.

When North Avenue was widened, the monument was moved from its original nearby location to its current place, due to the widening of North Avenue. On October 14, 1905, after a large parade to the site, the monument and bust was rededicated and “assigned to the custody” of the City of New Rochelle. The elaborate ceremony was attended by hundreds.

Under the bust of Paine:

On the back is the inscription

West Side of Monument (Front)

“The world is my country

To do good my religion.”

“The palaces of kings are built upon the ruins of the bowers of Paradise.”

South Side of Monument:

These are the times try men’s souls. The summer soldier and the sunshine patriot, will in this crisis, shrink from the service of their country, but he that stands now deserves the love and thanks of man and woman. Tyranny like hell is not easily conquered; yet we have the glorious consolation with us, that the harder the conflict, the more glorious the triumph. What we obtain too cheap, we esteem too lightly. Heaven knows how to put a price upon its goods, and it would be strange indeed, if so celestial an article as freedom should not be rated highly.  Crisis No. 1

The times that try men’s souls are over and the greatest and completest revolution the world ever knew, gloriously and happily accomplished. In the present case, the mighty magnitude of the object, the numerous and complicated dangers we have suffered or escaped, the eminence we now stand on and the vast prospect before us with contemplation. To see it in our power to make a world happy, to teach mankind the art of being so, to exhibit on the theatre of the universe, a character hitherto unknown, and to have as it were, a new creation entrusted to our hand, are honors that can neither be too highly estimated nor too gratefully received. Never had a country more openings to happiness than this. Her setting out in life like the rising of a fair morning, was unclouded and promising, her cause was good, her principles just and liberal, her temper serene and firm and everything about her wore the mark of honor, it is not every country that can boast so fair an origin, but America need never be ashamed to tell her birth, nor relate the stages by which she rose to empire. Crisis No. 15

East Side of Monument (Back):

It is only in the creation that all our ideas and conceptions of a word of God can unite. The creation speaks than universal language independently of human speech and human language, multiplied and various as they may be. It is an ever existing original, which every man can read. It can not be forged; it can not be counterfeited; it can not be lost; it can not be altered; it can not be suppressed. It does not depend upon the will of man whether it shall be published or not. It publishes itself from one end of the earth to the other. It preaches to all nations and to all worlds, and the word of God reveals to man all that is necessary for man to know of God.

North Side of Monument:

I believe in one God and no more, and I hope for happiness beyond this life. I believe in the equality of man; and I believe that religious duties consist in doing justice, loving mercy, and endeavoring to make our fellow creatures happy.” Age of Reason

It is necessary to the happiness of man that he be mentally faithful to himself. Infidelity does not consist in believing, or in disbelieving; it consists in professing to believe what one does not believe.”  Age of Reason

Note: On the monument the inscriptions are entirely in upper case letters. We have transcribed it in upper and lower case for readability. Some punctuation marks are omitted as they are on the monument, due to the shape of the obelisk.

Commemorative Booklet: “Rededication of the Paine Monument and Assignment of its Custody to the City of New Rochelle: A Record of the Exercises and Report of the Speeches Delivered at the Monument on Saturday, October 14th 1905,” compiled by James B. Elliott, Secretary of the Paine Memorial Association, Philadelphia, Pa., 1909.