Events leading up to the Battle of Middle Creek demonstrated the divisions between Kentuckians at the start of the Civil War. During the preceding weeks, men of the 14th Kentucky Infantry (United States) skirmished with men from the 22nd Kentucky Infantry (Confederate States of America). On January 10, 1862, an Ohio regiment led by Colonel James Garfield swung the campaign towards the Union with a decisive victory in the Battle of Middle Creek. Garfield was a college professor at the time of his commission but his victory at Middle Creek spurred a career in politics that culminated with his election to the Presidency.

This historic marker is located near the highway 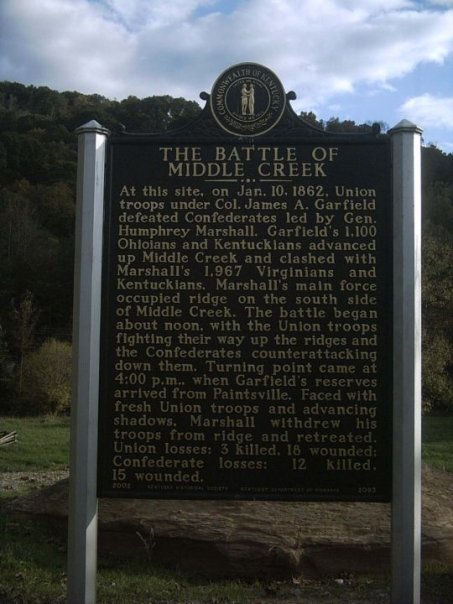 The Battle of Middle Creek was an engagement fought January 10, 1862, in Eastern Kentucky during the American Civil War. The battle, along with the Battle of Mill Springs, positioned the Union armies to invade Middle Tennessee.

More than a month after Confederate Colonel John S. Williams left Kentucky, following the fight at Ivy Mountain, Brigadier General Humphrey Marshall led another force into Eastern Kentucky to continue recruiting activities. From his headquarters in Paintsville, on the Levisa Fork of the Big Sandy River, northwest of Prestonsburg, Marshall recruited volunteers. He raised a force of more than 2,000 men by early January, but could only partially equip them.

Union Brigadier General. Don Carlos Buell directed Col. James A Garfield to force Marshall to retreat back into Virginia. Leaving Louisa, Garfield took command of the 18th Brigade and began his march south on Paintsville. He compelled the Confederates to abandon Paintsville and retreat to the vicinity of Prestonsburg. Garfield slowly headed south, but swampy areas and numerous streams slowed his movements, and he arrived in the vicinity of Marshall on the 9th. Heading out at 4:00 a.m. on January 10, Garfield marched a mile west near the Forks of Middle Creek, fought off some Confederate cavalry, and turned west to attack Marshall. Marshall had put his men in line of battle north and east of the creek near its forks.

Garfield attacked shortly after noon, and the fighting continued for most of the afternoon until Union reinforcements arrived in time to dissuade the Confederates from assailing the Federal left. Instead, the Confederates retired south and were ordered back to Virginia on January 24. Garfield's force moved to Prestonsburg after the fight and then retired to Paintsville. Union forces had halted the Confederate 1861 offensive in Kentucky, and Middle Creek demonstrated that their strength had not diminished.

The Battle of Middle Creek, along with the Battle of Mill Springs a little more than a week later, cemented Union control of Eastern Kentucky until Confederate Gen.Braxton Bragg launched his offensive in the summer and fall of 1862. Following these two January victories in Kentucky, the Federals carried the war into Tennessee in February. In October 1992, the battlefield was designated a National Historic Landmark by the National Park Services.