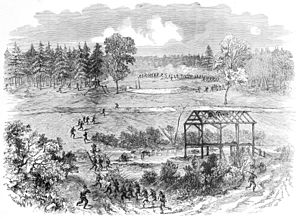 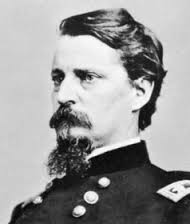 Historical Marker for the battle, using the name of the battle most commonly used, "Burgess Mill" 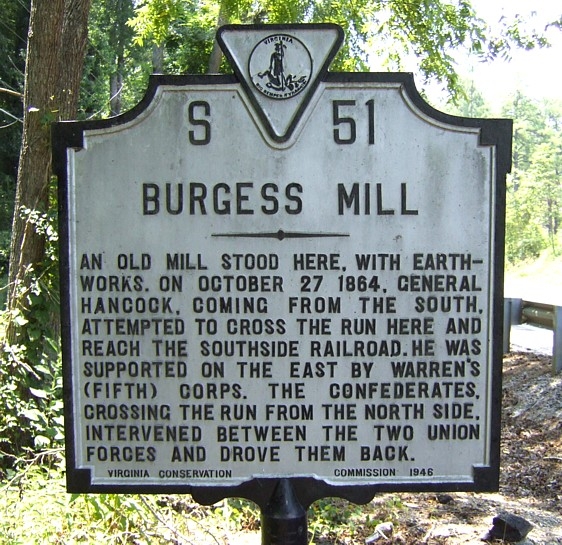 Map depicting the movements of the Union assault 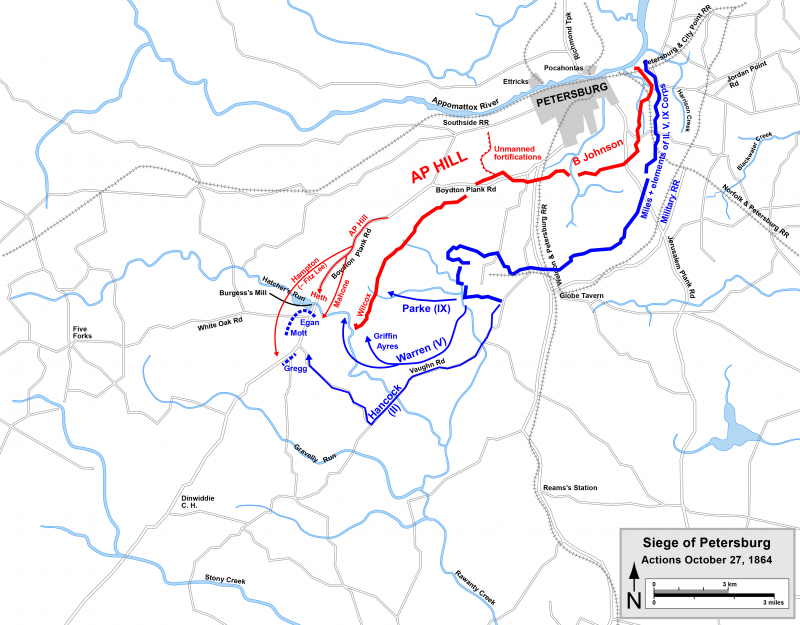 Earlier in the month of October, Union forces had captured Confederate earthworks along the latter's right flank around Pebble's Farm area near Petersburg. The next Union assault to be made was to continue in capturing Confederate lines near Pebble's Farm along Boydton Plankton Road, which would also cut off an avenue of escape for the Confederates.

On October 27, Union General Winfield S. Hancock led his men of the Union II (2nd) Corps against Confederate lines along the creek of Hatcher's Run, Burgess Mill and along the Boydton Plankton Road. Confederate generals A.P. Hill, Harry Heth (both army) and Wade Hampton (cavalry) tried to hold off the Union assault but were pushed aside. During the attack, Union generals George Meade and U.S. Grant noticed a gap between Hankcock's II Corps and V (5th) Corps and ordered General Crawford's division of the V Corps to fill the gap, but they became tangled up in the woods. Grant deemed the Confederate line too strong and stopped the assault.

As Union soldiers returned to their lines, Hankcock's II Corps became isolated and surrounded by Confederate forces. As the II Corps tried fighting off the Confederate forces, Crawford's men were also driven off and threatened with encirclement as well. Fortunately, other Union forces, both infantry and cavalry, came to these men's rescue and in turn almost encircled the Confederate forces. Hankcock was able to hold onto the Boydton Plankton road for the rest of the day, but was forced back into his original position because he deemed his position on the road too unstable to hold. Because both sides returned to their original positions, the battle was inconclusive. Both sides lost around 3,000 total.