This memorial to the 58,272 American military personnel who perished or were declared missing in action (MIA) during the Vietnam War was completed in 1982. The wall, in addition to the Three Servicemen Statue and the Vietnam Women's Memorial, is part of the Vietnam Veterans Memorial located on the National Mall in Washington, D.C. The memorial demonstrates the way that public perception of monuments can change over time. The initial design for the monument at the National Mall received criticism from leading conservative politicians who hoped to create a memorial that was similar to other war monuments that depicted soldiers and military leaders. Some politicians and commentators even attacked the designer, 21-year old student May Lin, because she was the daughter of Chinese immigrants. By the time of the monument's dedication, however, most Americans approved of the monument's design. Those who saw the monument in person were moved to see the reflections of the living in the black granite wall as they reflected upon the names of the dead. 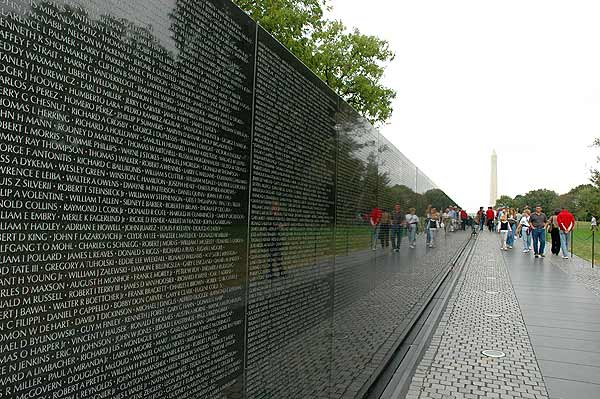 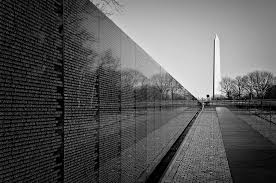 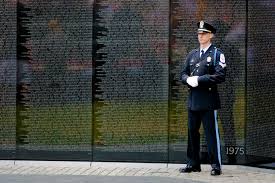 The history of the memorial originates from a non-profit organization called the Vietnam Veteran's Memorial Fund (VVMF). The mission of creating this memorial was so veterans would have a physical representation of their service recognized by the American people. The hope was that this would bring some closure and reconciliation among the veterans and civilians.
There was backing for funding for the memorial at the national level, early on. Senator Charles McC. Mathais Jr. formed legislation to establish a site on national park land for this project on November 8, 1979. Sen John Warner was also an early supporter with his financial contributions that launched a fundraising campaign on the national level. A staggering eight million dollars was raised for the memorial, all of which came from private funding. Although many organizations and groups contributed to the funding, more than a quarter of a million individual Americans gave money for the project. In fact, this is where the majority of the funding came from. This is extremely significant, considering that the American public so strongly opposed the war. Ultimately, three acres of land were allocated to the memorial in Constitution Gardens beside the Lincoln Memorial on July 1, 1980.
In October, the VVMF held a national competition for the design of the memorial and had 2,537 registrants. 1,421 entries were submitted by the deadline in March and subsequently judged by eight award-winning artists and designers selected by the VVMF.  The panel of judges selected the winner on May 1, 1981: 21-year-old Maya Ying Ling, a senior at Yale University. The design was approved and accepted eagerly by the VVMF. The foundation hired an architect to bring Ying Ling's design to fruition and she served as a design consultant. Ground was broken for construction on March 26, 1982.
The design of the memorial consisted of two granite walls, which are about 10 feet high. The vertical edges of the walls taper to around eight inches. The stone used for the walls was imported from India, where it was chosen for its reflectiveness, and then shipped to Tennessee--where the etching of the names was completed using a sunblasting process. One wall points towards the Washington monument while the other points in the direction of the Lincoln Memorial. The reflective quality of the wall is a metaphor for unity of the past with the present. There is a pathway to walk alongside the memorial. The names start at the 1E panel, beginning with those who were killed in 1959.

About 1,200 of the names on the wall are military personnel who went M.I.A. There are twelve women listed on the wall, even though there were far more female casualties in the Vietnam War. Many visitors to the wall etch the names of loved ones on paper.