The Robert J. Dole Institute of Politics, more commonly referred to as the Dole Institute, is officially nonpartisan and located at the University of Kansas. The Institute pays homage to Senator Robert J. Dole, who served for Kansas in the US Senate from 1969-1996 and the House of Representatives from 1961-1969. In 1996, Dole was the Republican nominee for President and was defeated by Bill Clinton.

Exterior of the institute 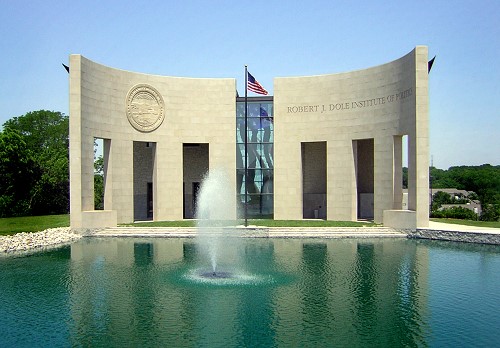 Interior of the institute

Robert Dole was known for crossing party lines in an effort to create the best outcome for the American people. Notably, he crossed party lines to help save social security, reduce the federal deficit, and pass the Americans with Disabilities Act. He also was on the board of the Bipartisan Policy Center, a nonprofit focused on bringing the two major political parties together in an effort to enact effective change and work towards common goals.

Plans for developing the institute began in 1996. Following Dole’s loss in the presidential election, University of Kansas Chancellor Robert Hemenway asked Dole to donate his congressional papers to the school. Dole studied at the university before joining the military during World War II. The institute was created to foster the idea of a political career as one of service and goodwill and to encourage not only political, but also civic, participation.

The institute still holds these values, as well as working to foster the promotion of civil bipartisan discussion. While the institute wishes to promote these values in the public at large, its location at the University of Kansas is centrally situated to promote these values in young people- the political leaders of our nation’s future. The institute offers a variety of programs for students, including a series called “Pizza and Politics” in which students receive free pizza and listen to lectures on a variety of topics. Recent topics include “Where no pizza has gone before: Indigenous communities in Latin America”, “How to Make it as a Young Professional”, and “Standing up for what you believe in: Advocacy for Special Education.”

Although the “Pizza and Politics” series is not currently available online, most of the institute’s programs are live streamed in an effort to make them as accessible to the public as possible. The website also contains a variety of resources related to civic engagement, including a political glossary and a link to the University of Kansas’ list of elected officials to contact in civic engagement efforts.

"About the Robert J. Dole Archive and Special Collections." University of Kansas. Accessed May 15, 2015. http://dolearchives.ku.edu.