The birthplace of Dwight D. Eisenhower, a military leader who became the Supreme Allied Commander in World War II and the 34th President of the United States, is now home to a small museum with exhibits related to Eisenhower's life and the history of the northern Texas town of Denison. Eisenhower was born at this location on October 14, 1890, and served as the President from 1953-1961. The home and the property were deeded to the Eisenhower Birthplace Foundation in 1953. This organization purchased and moved several houses to the site, landscaped the area, and added a parking lot. In 2003, the birthplace home was refurbished with 1890s-era furnishings.

Dwight Eisenhower may have only lived at this house for a short time, but the fact that he was born here remains a source of pride for the people of Denison. 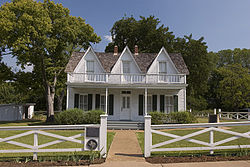 David and Ida Eisenhower moved to Texas from the small town of Hope, Kansas with their two sons Arthur and Edgar in 1889. David Eisenhower came to the area to pursue a new life in Texas working on the railroad. The Eisenhower family rented a simple frame house near the Missouri, Kansas and Texas Railroad yards where David worked as a wiper, earning about $40 a month cleaning the steam engines. Dwight David "Ike" Eisenhower was born in the bedroom of this two-story house in Denison on October 14, 1890. He was the only one of David and Ida Eisenhower’s seven children to be born in Texas.
When young Dwight Eisenhower was eighteen months old, the family returned to Kansas where his father secured employment with Belle Springs Creamery as a refrigeration engineer. It would be another 23 years before Eisenhower returned to Texas, this time as a second lieutenant in the Army infantry, stationed at Fort Sam Houston in San Antonio. While in San Antonio, he met Mamie Doud, a young socialite from Denver, Colorado. After a brief courtship, they were married on July 1, 1916.
Dwight Eisenhower may have only lived at this house for a short time, but the fact that he was born here remains a source of pride for the people of Denison. The community acquired the birthplace home in 1946 and he was hailed as a hometown hero when he came back to visit that year. He returned again on a presidential campaign trip in 1952, and Eisenhower Birthplace became a state park while he was president in 1958. Dwight Eisenhower made his final visit in 1965 to dedicate the Eisenhower Auditorium at Denison High School.