Lambert Castle was built by prominent English-born silk manufacturer Catholina Lambert in the early 1890s. Designed in the style of a medieval English castle and perched atop Garrett Mountain overlooking Paterson, New Jersey, the family residence housed Lambert’s large collection of American and European paintings and sculptures. After Lambert died in 1923, the City of Paterson purchased the home. The city used Lambert Castle as a hospital to treat tuberculosis patients before handing over the title to the Passaic County Park Commission in 1928. Six years later, in 1934, the Passaic County Historical Society received permission to transform the building into a museum and library. In 1976, Lambert Castle was listed on the New Jersey and National Register of Historic Places. 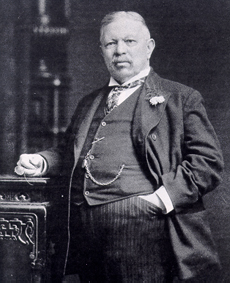 The story of Lambert Castle begins with that of Catholina Lambert. Born to humble beginnings in Yorkshire, England in 1834, Lambert went to work at the age of ten as an errand boy at a mill. Over the course of several years, he saved for a ticket to America. In 1851, Lambert arrived in Boston and began working at a silk factory owned by Benjamin Tilt and Walter Dexter. When Tilt left the business several years later, Dexter asked Lambert to be partner. To aid Lambert is purchasing Tilt’s share, Dexter loaned the young English immigrant $5,000. A few years later, Lambert not only repaid Dexter, but also bought him out. While he was making a name for himself in the business world, Lambert married Isabella Eldridge Shattuck in 1857. The marriage was a happy one and would produce eight children, all of whom would live to adulthood and become successful.

By the early 1860s, Lambert’s Boston silk factory was thriving and he decided to build a new mill in Paterson, New Jersey. He named it Dexter Mill after his mentor and former business partner. During the Civil War, the Dexter Mill received a large number of government contracts, making it a success rather quickly. To oversee the mill’s construction, Lambert moved his family to Paterson, buying a home in the southern end of the city. With the financial success of his silk factories, Lambert began purchasing American and European paintings and sculptures and building quite a collection.

By the 1890s, Lambert’s growing family and art collection required a larger home. In 1892, he began constructing a new residence on Garrett Mountain overlooking Paterson. A nod to Lambert’s English heritage and upbringing, the home was designed to look like a medieval English castle. While named it Belle Vista after his beloved wife, the community referred to it as Lambert Castle. Construction was completed in 1893. Three years later, Lambert added a large art gallery to the home. He also built a seventy-foot-tall observation tower and a summerhouse on the property. Lambert Castle hosted innumerable esteemed guests, including President William McKinley.

During the early twentieth century, Lambert suffered personal and financial blows. In 1901, personal tragedy struck when his beloved wife of nearly forty-five years passed away. At around the same time, Lambert fell on hard times financially. In 1916, his mounting debts forcing him to sell his art collection. Heartbroken and financially devastated, Lambert continued to live in the home until his death in 1923.

Two years later, Lambert’s son, Walter, sold the residence to the City of Paterson. The city used Lambert Castle as a hospital to treat tuberculosis patients before handing over the title to the Passaic County Park Commission in 1928. Six years later, in 1934, the Passaic County Historical Society received permission to transform the building into a museum and library. In 1976, Lambert Castle was listed on the New Jersey and National Register of Historic Places. In the late 1990s, the building underwent a massive renovation project. It reopened its doors to the public in 2000. Today, visitors can tour the first floor of the museum, where period rooms will transport them back to Gilded Age America and docents will tell them of the story of Catholina Lambert and Lambert Castle.