Originally founded in a small gallery around San Francisco’s waterfront in 1984, the Contemporary Jewish Museum is now housed in what was previously the Jessie Street Pacific Gas and Electric Power Substation, a landmark dating back to 1907. The Contemporary Jewish Museum serves as a non-collecting museum to present contemporary and relevant art exhibitions to bring people together and to spark connections through shared dialogue. The Museum does not solely exhibit works of art, but also literature, film, music, and even debate in order to provide an engaging, educational, historical space for visitors. In addition to art exhibits, the Museum also periodically offers workshops and classes of all kinds. The substation was added to the National Register of Historic Places in 1974.

A view of the CJM showing both the old Power Substation and the new, metallic installation. 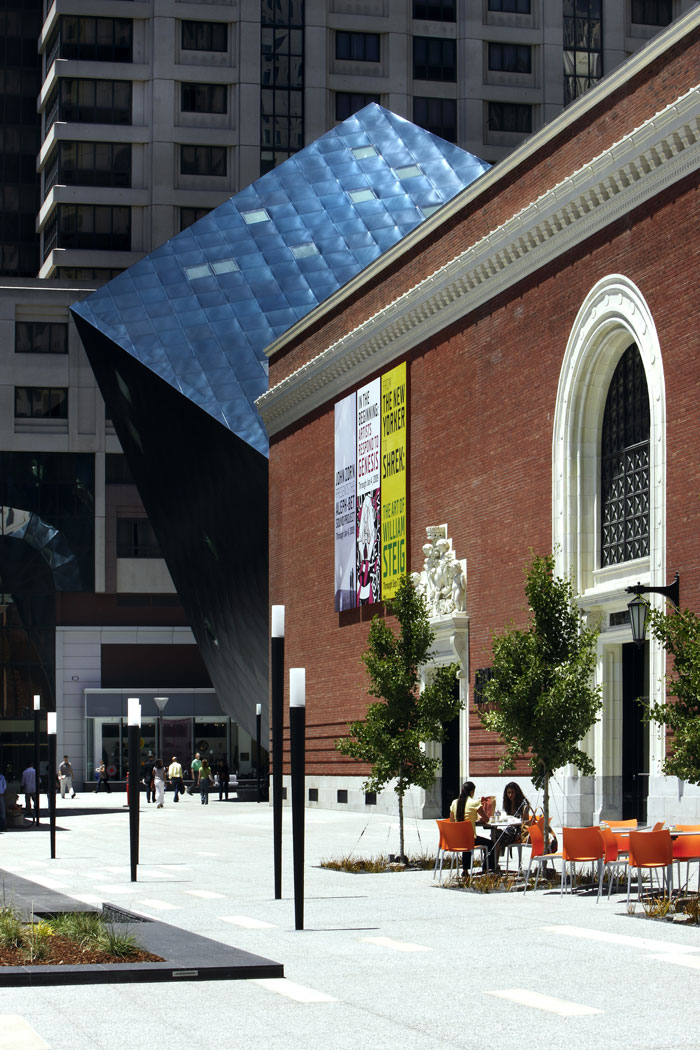 The Contemporary Jewish Museum (CJM) is a landmark of the San Francisco area, with its current building serving as an art piece itself. The Museum was originally founded in a small gallery near San Francisco’s waterfront in 1984, where it began its mission to make the Jewish experience relevant for a modern audience, and to encourage modern Jews to open up about themselves and their lives through dialogue. Though the CJM flourished as it was, the San Francisco Redevelopment Agency offered the Museum the chance to develop the Jessie Street Pacific Gas and Electric Power Substation in 1994.

It was not until 1998 that the CJM selected an architect, Daniel Libeskind, to design the new building. In formulating his new look, Libeskind decided to design the building after the Hebrew characters which spell “L’Chaim” which means “To Life.” As Jewish tradition dictates that letters actually participate in the stories that they tell, Libeskind found it fitting to have the letter-designed buildings serve as educational and exhibition spaces. Although design began in 1998, the building itself was not completed until 2005.

The current Contemporary Jewish Museum was built right into the Power Substation with two large, metallic cubes serving as new spaces for exhibitions and performances. The two cubes cut right through parts of the old substation, resulting in a design that evokes a fusion of the old and the new, with the red brick of the Power Station fusing with the metallic blue of the cubes. It is this fusion that symbolizes the marriage of Jewish culture and our contemporary times.