In the late nineteenth century, Pennsylvania became well known for anthracite coal. Mine owners flocked to the anthracite region to mining the valuable mineral. Lattimer became a patch town near Hazelton which was common for the area given the abundance of anthracite coal. Tensions between miners and mine owners did not appear uncommon considering the amount of labor strikes in the 1890s. However, the summer of 1897, tensions between miners and owners reached a boiling point. Many of the miners working in the Lattimer patch town were Slavic immigrants. The mine owners treated immigrant miners however they wanted. The immigrant miners were forced to shop at company stores paying double for necessities and typically given the most dangerous jobs. On September 01, 1897, Lehigh and Wilkes-Barre workers formally voted to strike. By September 03, 1897 roughly 5,000 miners from the surrounding coal mines joined the strike. Miners walked off of work sites and shut down the anthracite and carbon mines. On September 10, striking miners gathered at Hardwood, proceeded to march peacefully towards the Lattimer Mines. The Local sheriff gathered a deputized group of locals and engaged the striking miners. The sheriff and his men started shooting at the miners, 19 men ended up dead, and many more were injured.

Strikers marching before the shooting. 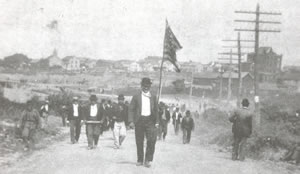 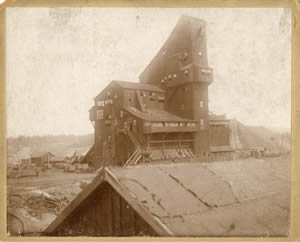 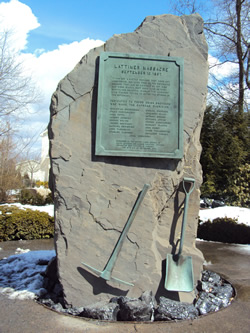 During the second wave of industrialization in America, coal mining became serious business, adding many jobs to the economy. Coal mine owners, however, were not benevolent employers in the early days of the industry. Pennsylvania, home to the largest deposit of anthracite coal in the country filled up with patch towns. Patch towns appeared where ever anthracite coal was found. A majority of the miners were immigrants in Pennsylvania came from Eastern Europe. By the 1890s, miners began unionizing due to the growing strength of the United Mine Workers of America. Tensions between miners and mine owners were typical of the period. No major strikes or violent acts had taken place. However, tensions between local miners and immigrant miners mounted. On top of this, coal mine owners treated the immigrant miners horribly, giving them the most dangerous jobs. The Slavic miners faced bigotry, and discrimination in the mines, from residents and employers.

Miners from various operations grew agitated with long working hours, low wages, and unsafe working conditions. Throughout August, miners went on strike and began to unionize. A majority of their demands were met, and the strike nearly ended. However, Sheriff Martin of Luzerne County met with mine operators from the Cross Creek Coal Company. These men decided they would not concede to the miners demands. The Cross Creek Coal Company reinforced the Coal and Iron Police while Sheriff Martin deputized residents. Meanwhile, during the meeting between Martin, and Cross Creek Coal, thousands of miners marched peacefully. Local newspapers reported in favor of the striking miners while other newspapers supported the mine owners. Sheriff Martin issued a proclamation warning against the unlawful assembly, acts of violence, or misconduct against citizens as a breach of the peace.

On September 10, 1897, miners from Lattimer and Hardwood marched towards the Lattimer mine in peaceful manner. Sheriff Martin and his posse gathered where the strikers were protesting. Martin claimed miners ran at him and ordered his posse to fire their guns. 19 men were shot to death, most in the back, and many more people were injured. Martin later changed his version of events claiming the miners were armed. However, there was no evidence the miners had any weapons on them. Newspapers from across the country illustrated the horror of the shootings via headlines, such as: “The Hazleton Daily Standard wrote, “Yesterday’s Butchery --- A Mob of Heartless Deputies Fire Into a Throng of Marchers and Accomplish Deadly Work.” Confusion spread across the country about who was to blame for the shootings. Many newspapers that supported the sheriff switched their support to the miners. Through various interviews and different accounts given by Sheriff Martin, many people blamed the sheriff for the violence. Sheriff Martin and his posse stood trial. However, none involved with the shooting were sentenced and walked free. Today a monument stands in place of the tragic event where peaceful protesters were shot down.