The Point of Rocks Stage Station State Historic Site is located east of Rock Springs, Wyoming. It was constructed either in 1861 or 1862 and used as a rest stop on the old Overland Trail. People traveled westward on the trail and the station served as an important juncture. The building has been restored and was listed on the National Register of Historic Places in 1970.

The station as it appears today 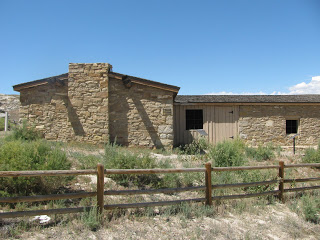 The station served as station on the trail until 1868 when the Union Pacific Railroad built tracks that reached it. The station then became a freight mining depot and served that purpose until the mid 1870s when mining declined in the area. A Union Pacific foreman and his wife then lived in the station beginning 1877. In the following years it became a store, school, and ranch headquarters. The state of Wyoming bought the station in 1947 and gave established it as a historic site.

It appears to be an open site for visitation at any time.