The New Britain museum of American Art has a history of growth, acceptance, success, and education that makes it one of a kind. Their focus and pursuit of an excellent educational program that will meet the needs of generations to come only adds to that. Visitors to the Museum are offered a variety of programs to experience the diverse collections of American art that span over centuries and differ in style. 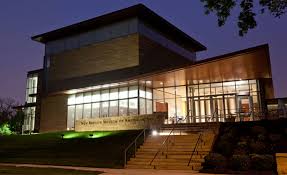 The New Britain Museum of American Art (NBMAA) began as the New Britain Institute. This program was established in 1853 for the purpose of promoting education by a group of newly arrived immigrants working in the cities factories. For close to fifty years the group rented spaces to host meeting and programs, until in 1901 the New Britain Institute transferred more permanently to a large building in town that was able house over 70,000 volumes. The new building also contained an art room that housed portraits of prominent local and national figures.

In 1903 the Chairman of the New Britain Institutes’ building committee and previous mayor of New Britain, created the first purchase fund for art to start their collections. For decades collections ranging from colonial to contemporary works grew, and in 1928 Fanny J. Brown, the first curator at the Institution began to expand it’s exhibition attempting to incorporate more modern themes. Finally, in 1934 an endowment and mansion were left to the Institute by a New Britain philanthropist, allowing the opening of the Art Museum of the New Britain Institute in 1937.

The Museum now had appropriate space to expand, and they continued to do so. Throughout the mid twentieth century, the Museum continued to collect a wide range of American Art opening gallery space adorned with these pieces. The institution was also devoted to giving local talent a chance to exhibit some of their pieces through their exhibition program. Continued success and growth caused the trustees to grant the Museum a separate identity from the New Britain Institute. Thus, the New Britain Museum of American Art was given it’s name.

Currently, the NBMAA are continuing to expand their collections and now numbers 10,236 pieces, including oil paintings, prints, drawings, sculptures, illustrations, and photographs. The Museum’s focus on providing a contrast between art from different time periods differentiates it from American Art Museums. Furthermore, they are dedicated to serving all people who want to learn from their collections. The NBMAA’s mission is to become “one of the nation’s most welcoming art museums” by creating hands on opportunities to experience art while having a greater appreciation and knowledge of it. They strive to by one of the nation’s most distinguished and dynamic art museums with diverse exhibitions and accessible collections.  Finally, their main goal is to educate. The museum makes great efforts to serve the public as an excellent educational institution that is effective in its’ purpose.

In the beginning of the 21st century, the NBMAA transitioned into a new era as they made attempts to teach a new generation to appreciate art history and the preservation of its’ history. Therefore, the Museum began developing plans for its’ expansion, improved educational programs for people of all ages, conservation, and building their endowment. Currently, the Museum is housed in the new Chase Family Building and is one of the largest museums in New England.