The Johnson County Arts & Heritage Center (AHC) was formerly known as the Johnson County Museum of History. The museum first opened in 1967 in the old Greenwood School in Shawnee. In 2017, the museum was moved to a new location in Overland Park, in an award-winning renovated building. The large galleries tell the story of Johnson County’s history through interactive exhibits. 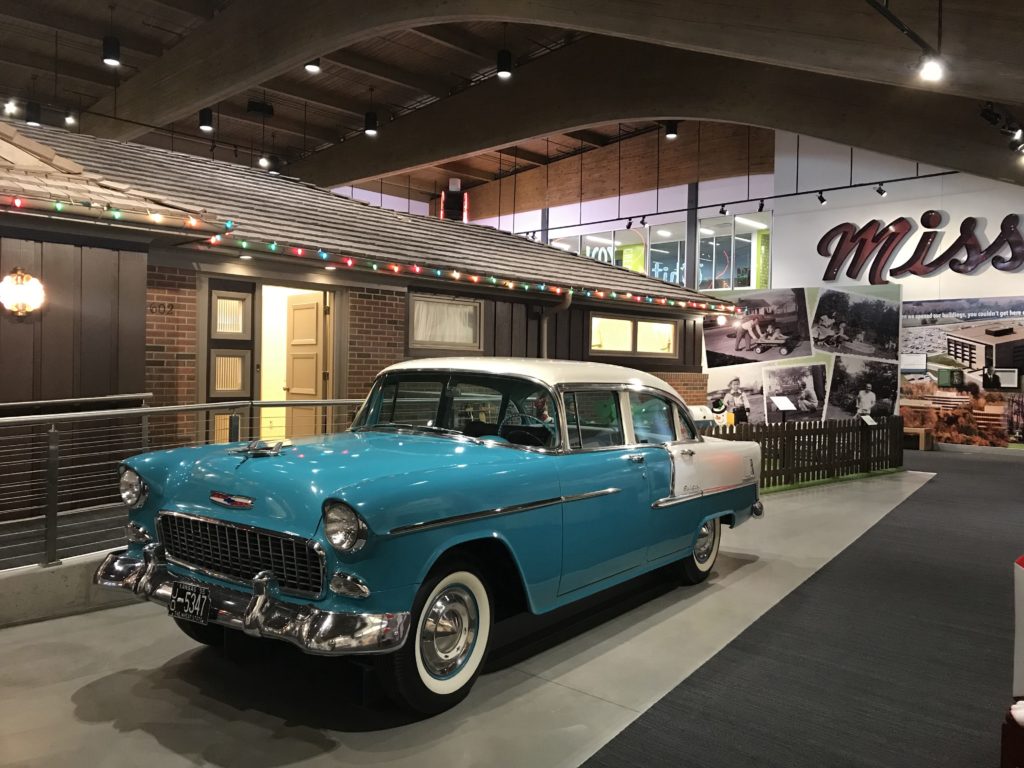 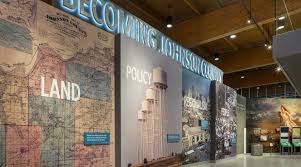 The former Johnson County Museum of History, located in Shawnee

The Johnson County Museum opened in 1967 and was originally run by all volunteers. It was housed in the old Greenwood School in Shawnee, a two-room stone schoolhouse built in 1927. [1] One of the signature pieces of the museum was the “1950s All-Electric House,” a five-room model show house moved to the lot behind the main building. Constructed in 1954, it was used to demonstrate the “home of the future” at the time. [2] By the time the museum closed, the school had expanded to a facility of 20,000 square feet. [1]

The old King Louie West building in Overland Park was chosen to be the location of the new museum. This building had once housed an ice rink, bowling alley, and billiards room, but it had sat empty for over a decade. [3] In 2017, the AHC opened at its new location after a $22 million renovation project. In addition to gallery and office space, the new 76,000-square-feet facility has a theater, classrooms, rehearsal room, and event space. [3] The AHC began charging an admission fee for the first time in the museum’s history, and about 70,000 visitors were served the first year. [1] The building won a Capstone Award for Adaptive Reuse in 2018. [3]

Today, the museum has over 20,000 artifacts, as well as a million photographs and 300 cubic feet of archival material, many of which are accessible online in its “JoCoHistory” portal. [1]. The main exhibit “Becoming Johnson County” traces the history of the county through its residents, the use of the land, and policies. The 1950s All-Electric House made the journey to the new facility, and now takes up 12,500 square feet of inside gallery space. A new exhibit called KidScape, an interactive exhibit that takes families through an 1870s farmstead, a 1900s city market, and a 1950s suburban community. The center also hosts regular special exhibitions and a wide variety of programs for adults and children, such as art classes and performing arts camps. The center's Black Box Theater holds 300, with a resident theater company that produces show year-round. The AHC has been “recognized over 20 times for excellence in exhibitions, programming and publications by national, regional and state organizations.” [1]

The AHC is under the management of Johnson County Parks & Recreation. [1] Lansfield Historic Site is also under its supervision (see separate Clio entry).

This drive from Olathe to Shawnee includes some of the leading landmarks of Johnson County. The tour includes several museums along with historical markers, monuments, and homes that are significant for their age as well as the families who lived in them.