The California Historical Society was first established in 1871. The State designated it as California's official history organization in 1979. 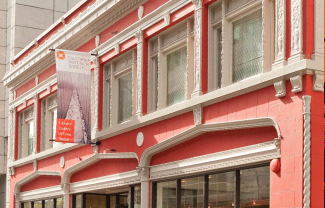 Founded in 1871, the California Historical Society is a nonprofit organization which aims to empower people to discover the rich and diverse past of California. In June 1871, they made their first of four attempts at constructing a building for the Society. The first group collapsed, but a second group attempted a revival in 1886. By 1902 the ailing Society partnered up with the California Genealogical Society and for a brief period, the collaboration prospered. The earthquake of 1906 led to another break in the group.

Finally in 1922 C. Templeton Crocker, grandson of Charles Crocker, permanently resurrected the Society. Also that year, Crocker placed at CHS his fine collection of Californiana, rivaling those of Hubert Howe Bancroft and Henry E. Huntington. His financial generosity supported CHS until the dues collected enabled the organization to hire its first staff member in March 1923. The group held its first exhibition at the Bohemian Club in San Francisco in 1924. CHS's initial purpose was the publication of a quarterly journal, which it has produced since 1922. Two decades later, Crocker permanently donated his collection to CHS, which still continues to form the foundation of the North Baker Research Library and the Fine Arts collection today.

Governor Jerry Brown made the CHS the official Californian state historical society in 1979. In 1993 the Society was able to purchase the former Building Exchange on 678 Mission Street and has remained there ever since. More recently the property has been reinforced for seismic safety and the basement has been converted into climate-controlled vaults for the Society's collections.

The Society is a nonprofit organization that receives all of its funding from private sources, which they use to create original exhibitions, maintain collections of historical works, host educational events for the community, and award the annual California Historical Society Book Prize. The Society publishes California History, an academic journal, in association with the University of California Press.