Matt’s Place Drive-In is historically significant for its association with the commercial and transportation development of early twentieth century Butte, Montana. Established in 1930, Matt’s Place was among the first, if not the first. Drive-in restaurants in Montana. The style of eatery was a new concept in not only Montana, but nationally as well. An increase in disposable income, the growth in number of automobiles, and the improvement of local, state, and national transportation systems caused a significant change in lifestyles for many Americans in the 1920s. As more people, including families, “took to the road” in the 1920s, there was a corresponding increase in the services offered to them by local entrepreneurs – this included tourist camps, service stations, automobile repair shops, and drive-in restaurants. Matt’s Place is directly associated with this transition in the “American Way of Life”. 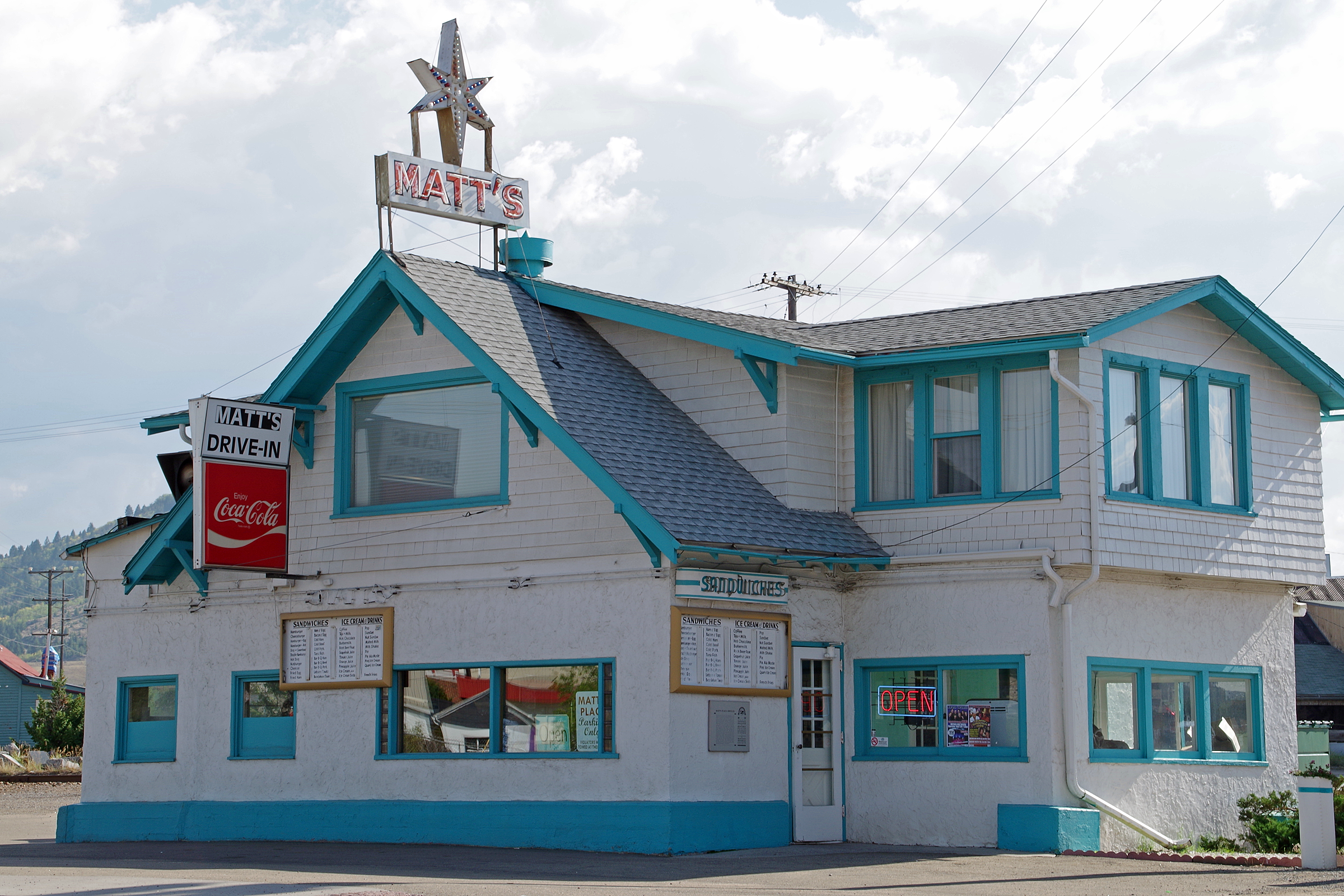 Interior view of the restaurant 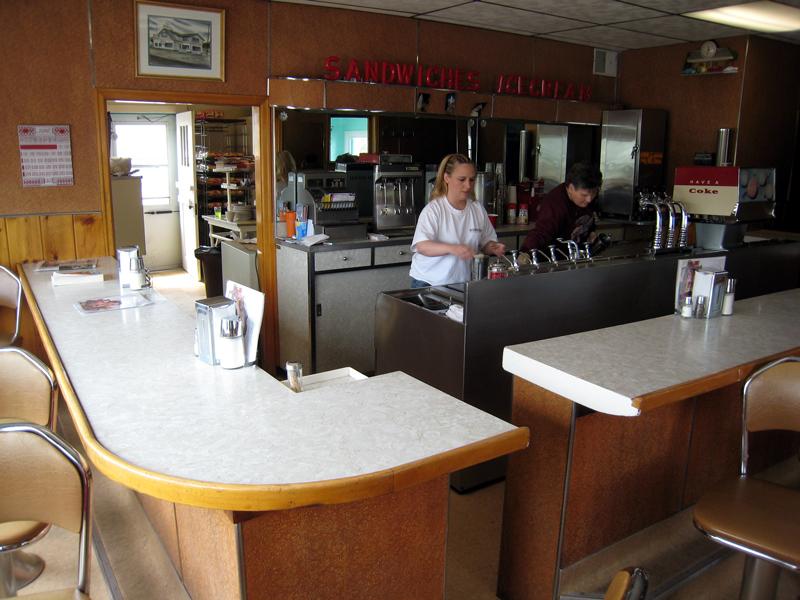 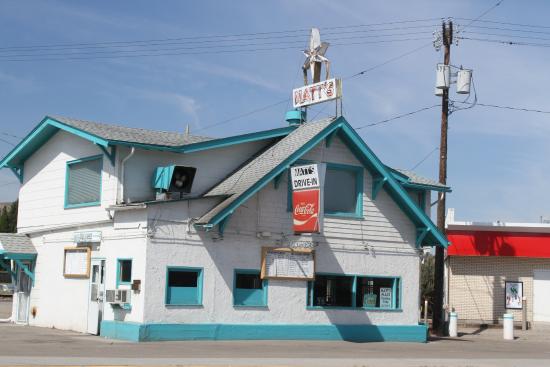 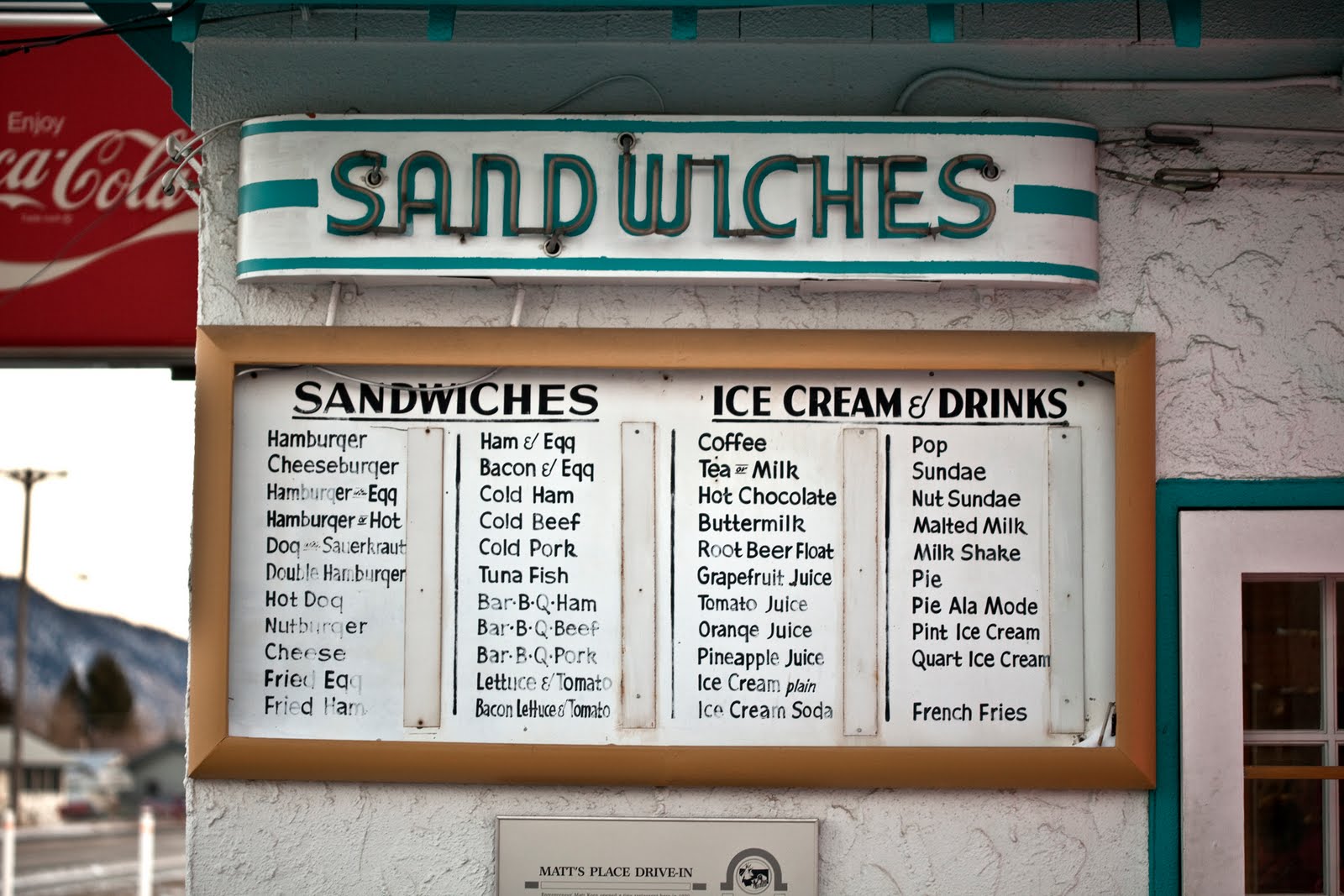 he discovery of gold at Grasshopper Creek west of the Continental Divide in 1862 was the first of many discoveries in what became Montana Territory, created by Congress in 1864. The small village of Butte was among scores of briefly booming placer gold camps in this region in the mid-1860s. A remote location, shallow diggings, and a lack of water kept it an unremarkable settlement on the decline of the later 1860s. Silver mining operations in 1876 put Butte on the map and brought miner Marcus Daly, a veteran of Nevada’s famed Comstock Lode, to the region to assess its silver potential for the Walker Brothers of Salt Lake City. The firm’s purchase of the Alice Mine signaled the advent of wealthy investors and brought world-renowned miners to Butte and Montana.

Daly broke with the Walter Brothers, allied himself with wealthy backers, and developed his Anaconda Mine. The Anaconda, and likewise other local mines, proved richer in copper than in silver. A need for copper – precipitated by new technologies such as electric lighting – saw the copper industry soar in the early 1880s. Butte became the “Pittsburgh of the West”, attracting immigrants of all nationalities by the trainload. Diverse cultures, dangerous work, and close living conditions in a teeming urban area made Butte an anomaly in the middle of the western frontier. The birth of labor unions in the late 1870s at Butte won it the nickname “Gibraltar of Unionism”, while its acrid sulfur-laden air, hundreds of saloons, and illicit activities such as gambling, and prostitution gained it a second nickname - “the perch of the devil”. The giant Anaconda Mining Company, administered after the turn-of-the-century by absentee stockholders, touched nearly every aspect of life in Butte. The company owned Montana newspapers, Butte’s parks, Butte’s water company and public transportation systems, and controlled most of Montana’s politics. Butte, at its peak population in 1916, was an industrial center of over ninety-thousand residents – the largest metropolis in a five-state region.

Although dominance of the Anaconda Mining Company made Butte similar to a company town, small business owners were numerous and small-time proprietors made a decent living in the various neighborhoods. They frequently kept their businesses in the family and passed on the desire for entrepreneurial careers to their children. John and Jennie Korn were typical immigrants who came from Austria to Butte and operated a saloon at 1831 South Montana Street along what was known as “the Boulevard”. They enjoyed the benefits of operating in the city although their business, located on the west side of South Montana and technically outside the city limits, left them exempt from city taxes. The Korn’s saloon operated from approximately 1911 until Prohibition. To the dismay of reformers like Carrie Nation, who tried to unsuccessfully to influence the town’s bartenders during a visit in 1911, there were some two-hundred-fifty saloons in Butte.

On June 3, 1930, Matt Korn, son of John and Jennie, purchased a placer mining claim property from the City of Butte. The property was located near his old neighborhood, on the east side of South Montana just inside the city limits. It was less than two blocks from his father’s old saloon and a few blocks away from the family home at 1803 South Washington. Matt either took over a shack that stood on the property or obtained an outbuilding from a residential site that was purchased by the State Highway Commission in 1923. In this shack he opened a tiny restaurant and called it Matt’s Place. Like the new places he had seen in California, it had a drive-up window so that customers could order from their cars. The little shack had no inside or curb service at first, only window service. By 1931, the small one-story restaurant was in its present location, perhaps moved a short edge of Rowe Road.

Matt’s Place was typical of drive-in restaurants in the United States in the late 1920s and early 1930s. Matt Korn imported the idea for the business from southern California, then the site of the most drive-in restaurants in the country. The nature of the business required that it be centralized while making use of roadside frontage for parking. Matt’s Place is ideally located near the intersection of South Montana Avenue, a major north-south thoroughfare in Butte and the east-west U.S. Highway 10, Montana’s primary east-west interstate highway. Unlike drive-ins in California, however, Matt’s did not rely on extensive signing, singular architecture, or advertisement to draw customers. Indeed, it relied on its “sparkling cleanliness, speed, and good food” for its success. The existing menu boards show food that was quick to prepare and serve. Like its counterparts in the east, it also served regional favorites, such as barbeque beef and hamburger with egg.