Dedicated in 1939, Municipal Auditorium serves as a prime example of Art Deco design. The building was the result of over a decade of organization and planning and made possible by a combination of city and federal funds through the Works Progress Administration. The building was added to the National Register of Historic Places in 1999, significant for its contribution to entertainment/recreation and performing arts as well as its classic Art Deco design.

Modern view of the Municipal Audtorium. 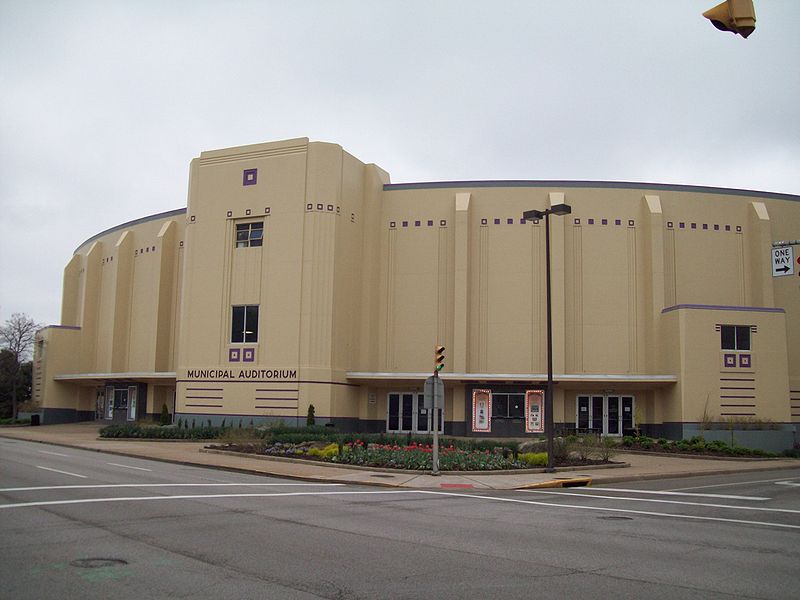 Throughout the 1920s, as the population of Charleston grew so did the desire for a premiere city auditorium for hosting touring shows and cultural events. Community organizations such as the Charleston Community Music Association and the Chamber Music Society, along with the Kanawha Players were created to explore ways that the city might create a grand civic venue to accommodate these events and the larger crowds that would come to the state capitol from surrounding communities.

Larry Silverstein served as chairman of the citizen’s advisory committee. Under his leadership, the city applied for a $412,000 Public Works Administration (PWA) grant in 1936. This request was denied owing to a present lack of funds, but local citizens and government leaders persevered. Through a combination of efforts that included a bond referendum in December of 1936, the group was awarded an additional $212,000 for the project. With these funds secured, the group was also able to secure $250,000 from the Public Works Administration.

With the funding secured, the next hurdle was selecting the site for the building.  On January 20, 1938, Larry Silverstein moved the first shovel at the groundbreaking ceremony which was attended by most of the city’s leaders, as well as the project architect Alphonso Wysong of Charleston.

Although the project was scheduled for a 208-day timeline, construction moved slowly and the completed building was not dedicated until November 9, 1939. A crowd of nearly 5,000 dignitaries and leaders of the state and community celebrated the new building and its classic Art Deco style, which was prominent in the 1920s and 30s.  The building is constructed with a steel joist frame resting on concrete pilings that anchor the building’s foundations as well as concrete floors and roof, metal lath and plaster ceilings, concrete and cinder block brick-faced curtain walls, and a stylistic concrete façade.

Some of the key elements on the exterior include the curved façade that extend away from the center block which features stair-like design at the top with a combination of rounded and linear ends.  There are two smaller towers at the front corners of the building.  The effect of the design is to draw the eye to the center tower. The auditorium boasts the largest seating capacity of any theatre in the state of West Virginia with a little less than 3,500 seats (3,483 – 2,377 in the lower Orchestra level and an additional 1106 on the Balcony level above). The ticket booths, interior lobby, and main auditorium feature similar styles of rounded edges, graceful curves, with sharp lines as well, much of which remains today.

A large-scale restoration project occurred during the 1960s to update and repair numerous aspects of the theatre, however, the essential aesthetic of the theatre remained unaltered.  Referred to as the “Art Deco Grande Dame” the Municipal Auditorium has lived up to the hopes of the citizens of Charleston whose efforts brought about its construction.  Over the years the large stage which measures 65 x 85 ½ feet, numerous performances of all sorts (including Bob Hope, Billy Joel, and Ray Charles to name a few), graduation ceremonies, recitals, fashion shows, and even for a brief period a basketball court.  Without question, the Municipal Auditorium influence on Charleston culture and the arts is unquestioned.  The Municipal was added to the National Register of Historic Places in 1999.  The building itself remains a staple in the community and a large and fascinating part of Charleston's cultural history.