According to the research of the 1910 census, 1,098 Black Americans resided in Forsyth County, Georgia; however, “by 1920, nearly every last one of them were gone” (11Alive 2020). Not long after the lynching of Rob Edwards, Earnest Knox, and Oscar Daniel, a revolutionary mass emigration of Black Americans occurred in Forsyth County, a region that would consist of almost exclusively White Americans for nearly 75 years. While Rob Edwards’ murder took place in 1912, the story did not reach the public eye until 1987. Since then, The Forsyth County Lynching Historical Marker lies at the site of the lynching of Rob Edwards and was installed in January 2021 and unveiled in September later that year (EJI 2021). 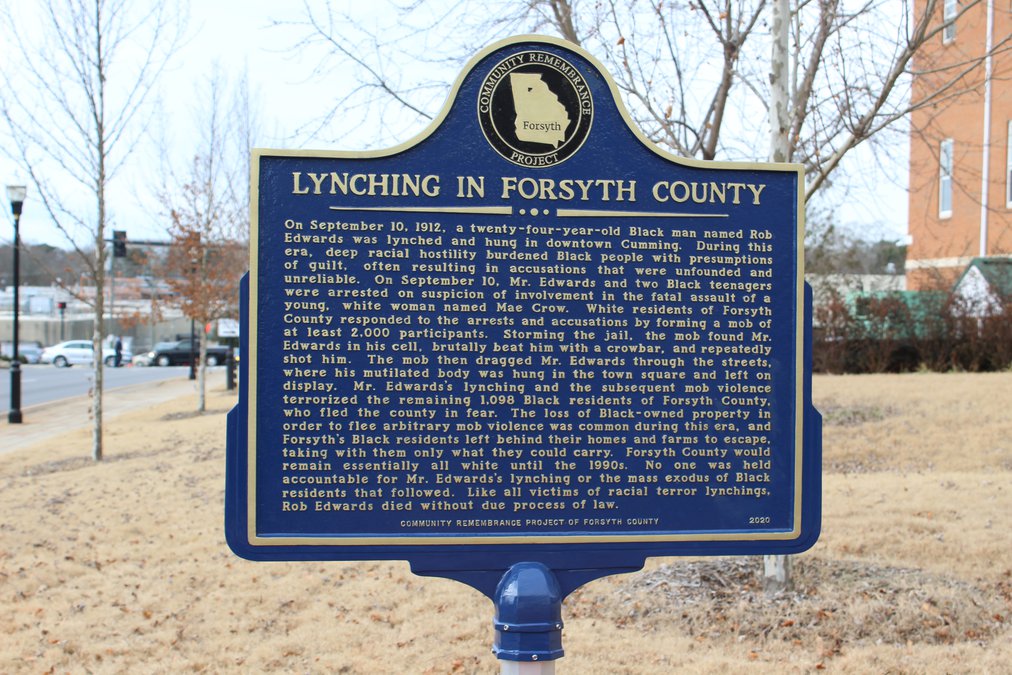 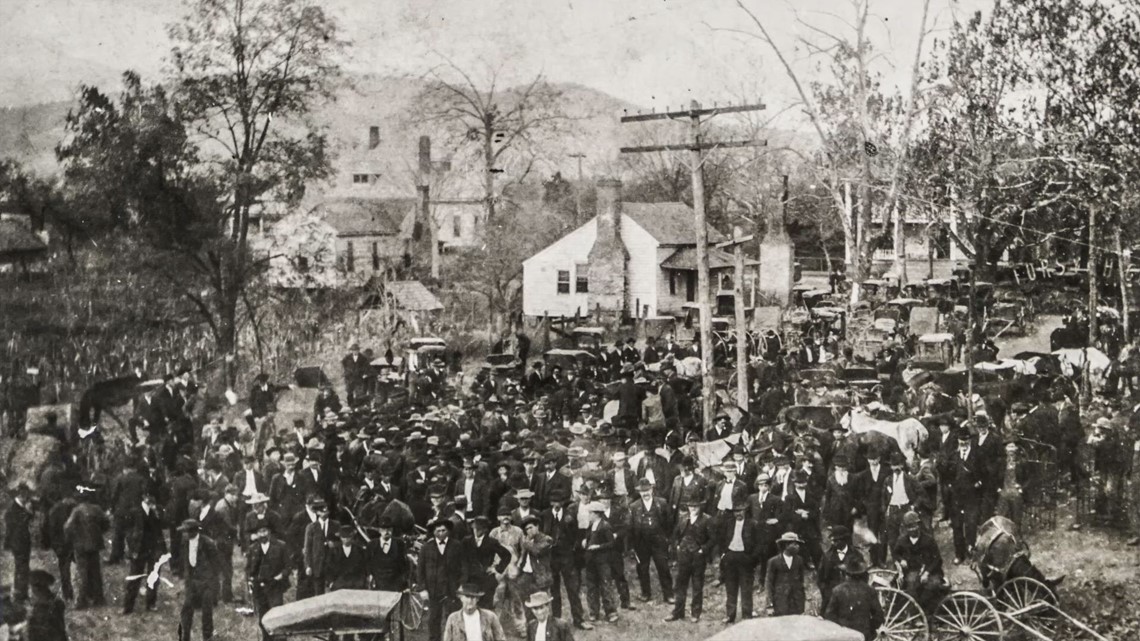 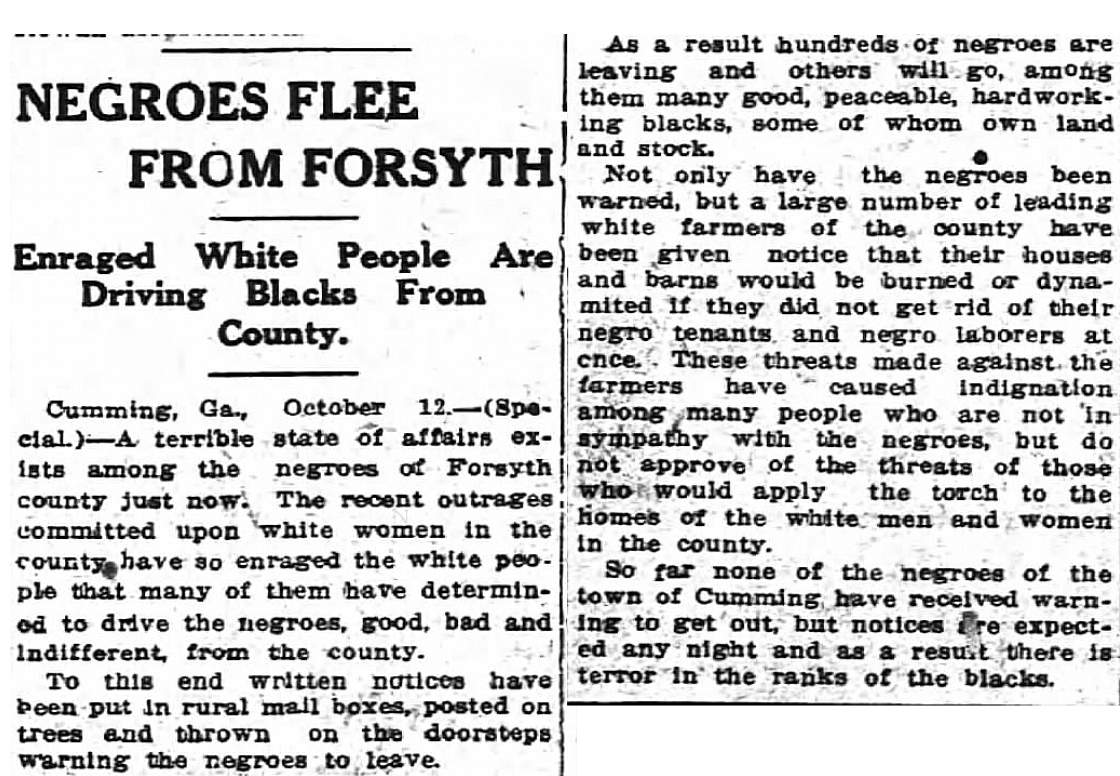 Similar to most stories of lynching, the lynching of Rob Edwards that occurred in September of 1912 began with accusations. A White American woman by the name of Mae Crow was found unconscious near the woods in what is now known as Lake Lanier. When the police arrived, they arrested Black Americans that were closest to the crime scene at the time, one of which happened to be Rob Edwards. While the suspects were being held in the Forsyth County Jail, a sizable group of White American vigilantes formed outside of jailhouse. Sheriff of Forsyth County at the time, Bill Reid, deliberately left the jailhouse with one person remaining to guard the cell, his deputy and political opponent: Deputy Lummus. 11Alive writers, Lindsey Basye and Brendan Keefe, in quoting Patrick Phillips who is the author of Blood at the Root, explain that Rob Edwards death, “involved a very large crowd gathering outside of the jail, dragging him out of the jail, beating him with crowbars, dragging his body around town behind a wagon, and then eventually his corpse is hoisted on a telegraph pole and everyone in the crowd take turns shooting into his body” (Basye & Keefe 2020). Miraculously, there were no arrests made for the murder of Rob Edwards.

Unfortunately, Edwards’ death was merely the tip of the racial violence iceberg that would ensue in downtown Cumming. The lynching of two Black American teenagers followed that of Edwards: “Earnest Knox and Oscar Daniel… were convicted in two separate trials on a single day” (Basye & Keefe 2020). Since death penalties could not be carried out publicly due to legality, an enormous curtain had been put up to shield the boys from view; however, the curtain had been burnt down the night before the execution. The photo taken immediately after the boys’ lynching is one of the last photographs taken in Forsyth County between 1912 and 1987 that pictures Black Americans.

Edwards was initially arrested for sexually assaulting Crow; however, when the police learned of her death, he was pinned for that as well. Despite the police telling the Black American suspects that one of them had confessed to the crimes and incriminated the others, it came out in later reports that Crow never regained consciousness before she died, never getting a chance to identify her attackers and, therefore, the innocence of the people held without evidence will forever remain a mystery.

Very little was recorded from September 1912 to January 1987; the most notable was the burning of newspaper articles and reports that addressed or even remotely talked about the 1912 lynching occurrences. This dry period came to an abrupt halt in 1987: “The racial cleansing started in 1912 but made national news in 1987 when activists marched into Cumming to bring awareness of the county's racist history. They were met by white residents with ‘Keep Forsyth White’ signs, chanting the N-word, and throwing rocks” (Basye & Keefe 2020). In addition to thousands of people, Oprah Winfrey was in attendance. With the help of an interview conducted by the Oprah Winfrey Network (OWN) in 1987, the lynching occurrences in Forsyth County were brought to the nation’s attention. In response to a question, a man by the name of Frank Shirley grinned as he acknowledged his position as Head of the Committee to Keep Forsyth and Dawson County White and was proud to explain to Oprah Winfrey that “there were thousands of white people that came out to join our white people’s protest…this was the largest white people’s protest in 30 years” (OWN 2015).

Due to the fact that the resurgence of racially biased prejudices was nationally broadcasted less than 35 years ago, it is important to state the obvious: the work to extinguish racism in metro Atlanta is far from finished. There are decedents of people with similar mindsets to Frank Shirley who are living in places like Forsyth County and fueling the environment built upon racist ideas. Racial biases transcend across socioeconomic statuses as seen in the fact that Forsyth County went on to become one of the richest counties in Georgia.

Oprah Winfrey Network. [OWN]. (2015, January 2). Oprah Visited A County Where No Black Person Had Lived For 75 Years [Video]. https://youtu.be/WErjPmFulQ0