The Chesapeake and Ohio 2755 Steam Locomotive was placed on the National Register of Historic Places in 2006 for its significance in engineering and transportation. The locomotive represents the use of the railroad in the West Virginia coal industry and the use of steam power by the Chesapeake & Ohio Railroad into the post-WWII era. The 2-8-4 wheel 2755 was part of the last generation of steam engines before the switch to diesel. In service between 1947 and 1956, the 2755 was placed at Chief Logan State Park in 1961. 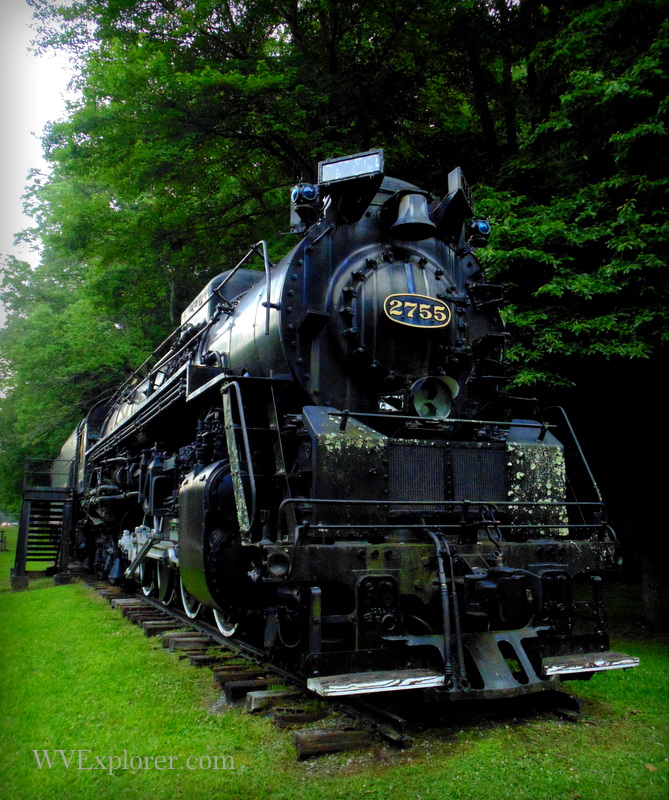 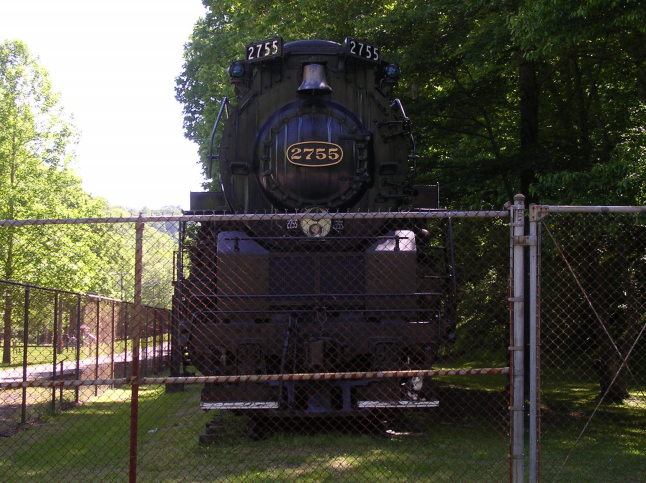 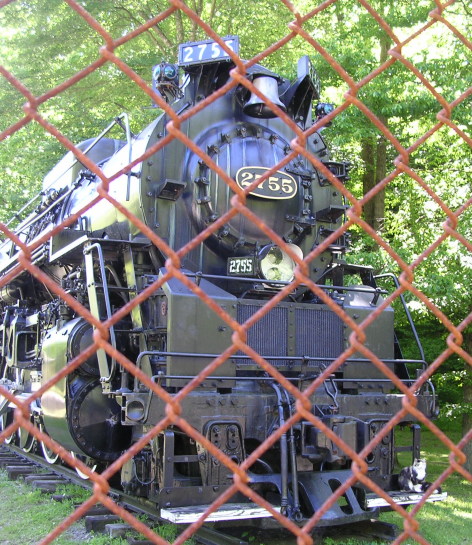 Close up of the wheels 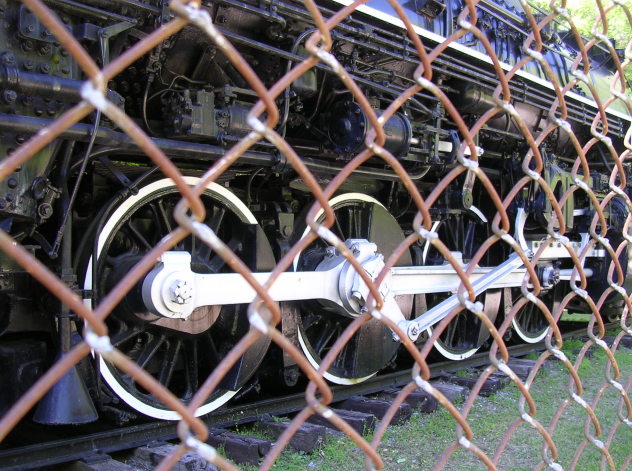 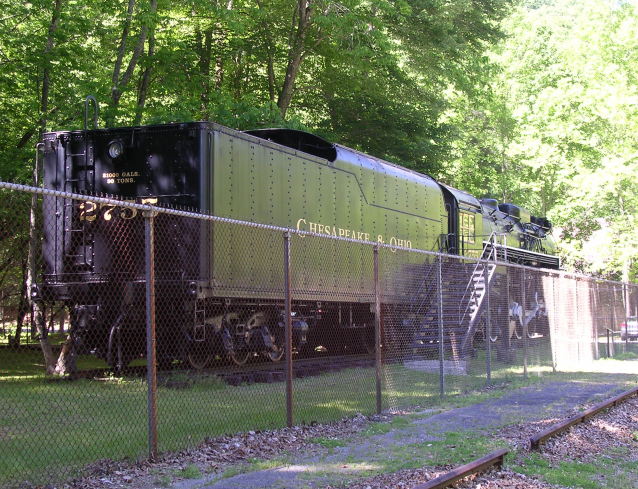 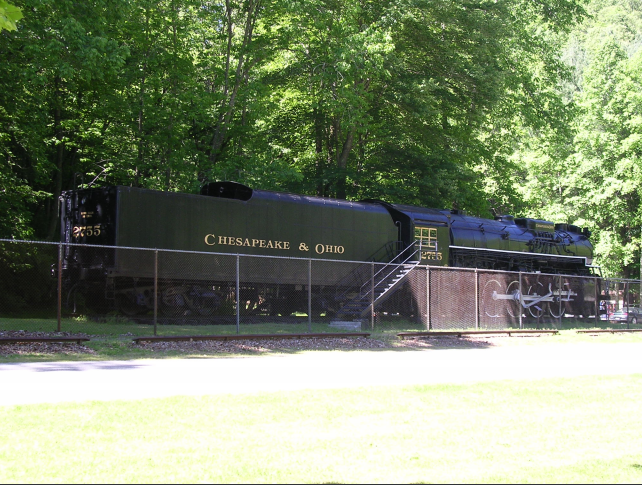 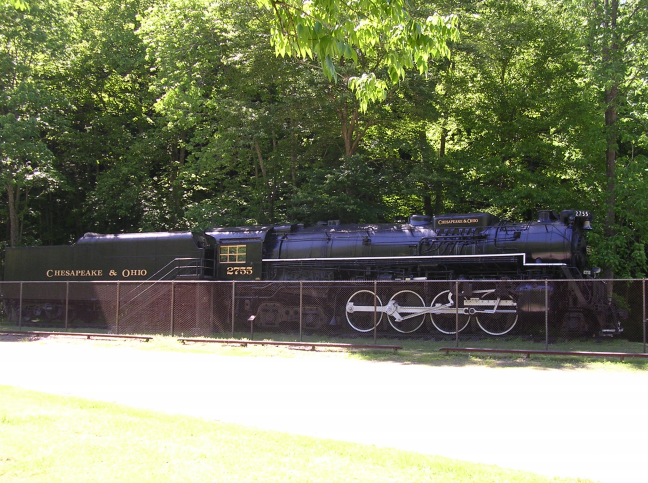 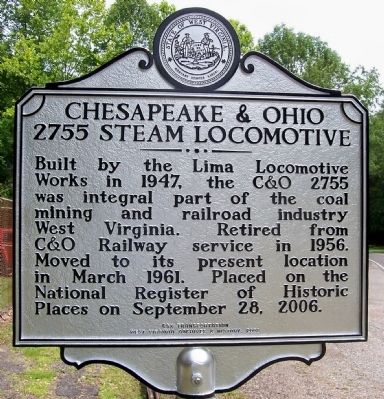 Starting in the 1920s, railroads were trying to improve on the engines developed during WWI to increase speed. Lima Locomotive Works, located in Lima, OH, developed a new class of locomotives that produced high temperatures/pressures to produce twenty-five to thirty percent more power for the same amount of fuel. Lima’s William Woodard increased the grate area to 100 sq. ft. to increase the steaming ability of the locomotive. This design required a four-wheel trailing truck to support the larger firebox and this led to the distinct 2-8-4 wheel arrangement. Lima Locomotive Works introduced the 2-8-4 locomotives in 1925 and this is considered the start of the “Super Power” era in steam locomotives.

Lima Locomotive built 147 steam locomotives for the Chesapeake and Ohio Railroad between 1925 and 1948. The C & O adopted the 2-8-4 wheel locomotives during WWII to meet the wartime demands of production and transportation. The first 2-8-4s ran between Cincinnati, OH and Hinton, WV. They were instantly popular in the low-grade areas of Appalachia due to their versatility; they hauled coal drags, merchandise trains, and passenger cars. The engines were used to transport coal, iron, and steel from the northern part of the state all the way to the southern coalfields, the Kanawha Valley, and everywhere in between. Originally given the name "Berkshires," the Chesapeake and Ohio Railroad company changed the name of their engines to the "Kanawhas." This name was given because of their mainline service to the Kanawha River Valley which paralleled C&O's main rail line. The C & O Railroad purchased ninety of the 2-8-4, Class K “Kanawhas” between 1943 and 1947, numbered 2700-2789: twenty from Lima Locomotive and seventy from the American Locomotive Company. The 2755 was in the third order of “Kanawha” locomotives, and the second order constructed by Lima Locomotive Works (numbers 2750-2759). It was constructed in 1947 and in service between 1947 and 1956 as a coal hauler on the Logan Subdivision.

The 2755 and 2-8-4 “Kanawha” engines3 represent the last generation of steam power before the railroad industry switched entirely to diesel power. By 1952 the C & O began to switch to diesel power and started to retire its steam engines and by 1957 all of the “Kanawha” locomotives had been retired from service. Thirteen of the engines were donated to various cities for display and the rest were scrapped; the locomotive in Buffalo, NY was wrecked by vandals and scrapped, so there are twelve remaining. Of the 1947 order only the 2755 and 2756 are preserved; the 2756 is on display in Huntington Park at Newport News, VA. After the 2755 was taken out of service it was put into storage at the C & O shops at Russell, KY until it was acquired by the WV Division of Natural Resources and sent in 1960 to Huntington, WV for refurbishment. The locomotive was placed at Chief Logan State Park in March 1961 and WV Governor W. W. Barron accepted the title from the C & O in September 1961.

In the 1970s or early 1980s the 2755 was heavily vandalized with windows smashes and many parts removed or damaged. She was repaired and the fence erected for protection. In 1996 a cosmetic restoration was done by Steam Operations Corporation.

As of 2020, Logan County in West Virginia has three listings on the National Register of Historic Places (NRHP). The National Register of Historic Places is the “United States federate government’s official list of districts, sites, buildings, structures, and objects deemed worthy of preservation for their historical significance.” Administered by the National Park Service, the NRHP contains more than one million properties.