The first lighthouse built on the U.S. West Coast was located on Alcatraz Island in California's San Francisco Bay. The lighthouse was on the southern end of the island near the entrance to the prison and was completed in 1854. This lighthouse served the bay during its time as a Citadel and military prison. That lighthouse was replaced by a taller lighthouse that stood some 95 feet above the sea level. The Alcatraz Island Lighthouse was a concrete tower built in 1909 to the south of the original one, which was demolished after it was damaged due to an earthquake in 1906. The lighthouse stands as a reminder of the keepers who served on the island for over a hundred years. 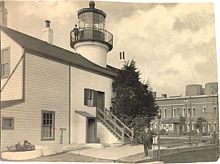 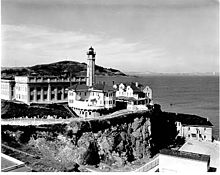 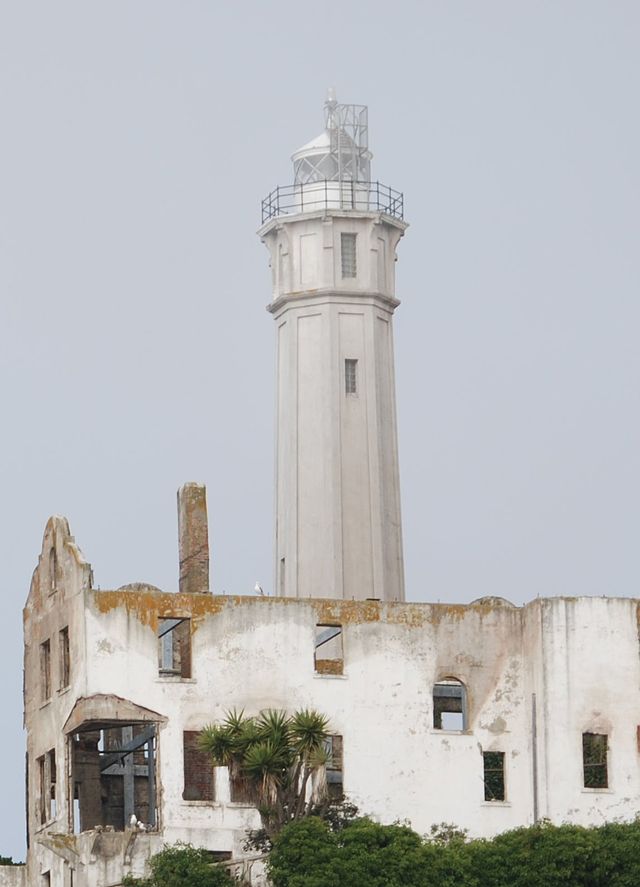 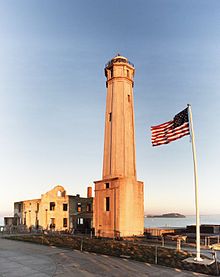 Because of a huge obstacle in the busy shipping channel of San Francisco Bay, the U.S. Government allocated money to construct a lighthouse on Alcatraz Island.  The first tower was constructed in 1852, but the Fresnel lens did not arrive until 1854.  This made it the first lighthouse to be built on the West Coast and it would serve until 1906 when it was damaged beyond repair in the 1906 earthquake.

In 1909, the Citadel was destroyed and the present cell house was built in its place.  With its 600 cells, the new prison was reportedly the largest reinforced concrete building in the world at the time.  This new structure interfered with the operation of the lighthouse so a taller ninety-foot, concrete tower was built.  "Construction work began on July 20, 1909, and the revolving fourth-order lens transferred from the old lighthouse was activated atop the new tower on December 1, 1909".  Attached to the base of the tower was a convenient dwelling with two two-story wings: the private smaller wing was for the head keeper and the two assistants shared the larger wing.  Since it was no longer needed, the original lighthouse was torn down.

Alcatraz served as a military prison until it was acquired by the U.S. Justice Department in 1933.  The lighthouse keepers worked alongside the prison until the light was automated on November 22, 1963.  This is also the same year Alcatraz closed as the Alcatraz Federal Penitentiary.  The Alcatraz Lighthouse is the oldest light station with a modern beacon and is part of the museum on the island.  Although when viewed from afar, it easily looks like the tallest structure on Alcatraz.  It is actually shorter than the Alcatraz Water Tower, but it lies on higher ground and makes it looks much taller. One dramatic event that was recorded by the keepers was a bloody escape attempt, known now as the Battle of Alcatraz.

The Alcatraz Island Lighthouse is still an active aid to navigation.  It can be spotted from almost any point in San Francisco, Oakland, and the Marin Headlands. The tower is all that remains of the old station because the lighthouse keeper's dwelling was destroyed by fire in 1969 by Native American protesters.  Since the lighthouse sits off shore on Alcatraz Island, the only way to get to the island is to by boat.  There is a cruise service that offers ferry service for the island and tours. Tickets usually sell out weeks in advance.  Alcatraz was declared a national recreational area in 1972 and was made a National Historic Landmark in 1986.