Notable as holding one of the largest collections of Jewish artifacts in the US, the Hebrew Union College (HUC) began accepting donations of Jewish artifacts and objects when it opened in 1875. When the museum opened its doors in 1913, with the help of the National Federation of Temple Sisterhoods, it became the nation’s first official Jewish museum. The museum includes a permanent collection as well as changing exhibits.

The Skirball Museum is located in Mayerson Hall. 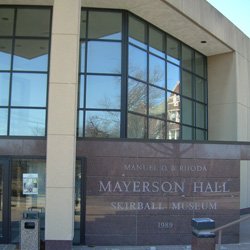 The museum’s main exhibit, titled “An Eternal People: The Jewish Experience”, is made up of seven galleries that depict various aspects of Jewish history, culture, and contemporary life. In addition to the museum it houses, the Hebrew Union College-Jewish Institute of Religion is of historical importance itself. It is America’s first institute for higher Jewish education. The college was founded by Rabbi Isaac Mayer Wise, who is as the founder of Reform Judaism in the United States. This institution educates rabbis, cantors, educators, and professional nonprofit management, as well as offering graduate programs to people of all faiths. In addition to the Skirball Museum, the HUC also boasts the impressive resources of the Klau Library, which provides extensive research materials not only to faculty and students, but also to the general Cincinnati community.