Fort Scott National Cemetery is one of fourteen national cemeteries in the United States and dates back to 1842. Established as a burial ground two decades before Abraham Lincoln designated it as a national cemetery in the early years of the Civil War, this cemetery was created by community members and known as the Presbyterian Graveyard until 1861. Burials in Fort Scott National Cemetery include many Civil War casualties, including 13 Confederate soldiers, 63 members of the United States Colored Troops, and sixteen Native Americans who served in the military. The cemetery also serves as the final resting place for flight crews in World War II in cases where the individual bodies could not be identified.

The rows of tombstone create a somber but poignant reminder. 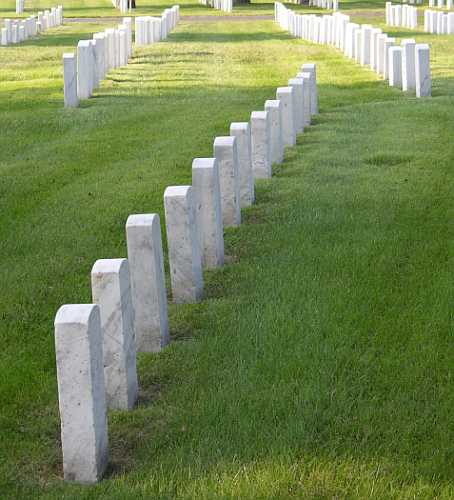 The U.S. military installation at Fort Scott was established in 1842 and named for Lieutenant General Winfield Scott who was the Commanding General of the U.S. Army at that time. The Army established a cemetery on the west side of town to accommodate the burial of soldiers who died from injuries or disease while stationed at the Fort Scott garrison. Since the cemetery was controlled by the Presbyterian Church first, it was known as the Presbyterian Graveyard. After the start of the Civil War, the new cemetery was used for the interment of soldiers stationed at Fort Scott. When Congress approved the creation of national cemeteries in 1862, the cemetery became one of 14 national cemeteries and President Lincoln renamed it to Fort Scott National Cemetery.

After the war’s end in 1865, the remains of those buried in the old military cemetery, as well as other soldiers buried in the vicinity, in Missouri and Kansas, were re-interred at Fort Scott National Cemetery. Following the close of the Indian Wars and resettlement of Native Americans, the Army closed or consolidated many of its small military outposts in the West. As a result, between 1885 and 1907, the federal government vacated numerous military post cemeteries, such as Fort Lincoln, Kansas, and re-interred the remains at Fort Scott National Cemetery. However, space soon ran out so they purchased approximately four acres southeast of the old post for use as a community burying ground in 1981.

The cemetery is home to one of the largest numbers of military gravesites in the United States beyond Washington D.C. and Virginia and is one of only three national cemeteries located in Kansas. A large sandstone monument is located here dedicated to Eugene Fitch Ware, who served as a soldier and captain in the Union Army. There is a gray granite monument here that commemorates the First Kansas Colored Volunteer Infantry. The Infantry was recruited as a Kansas State unit before being sanctioned into federal service.