The Beaux Arts commercial built at the turn of the century in 1899 is most famous due to its occupants, the Pfeiffer Brothers Department store. The brothers boasted that their store was the first full-fledged department store in all of Little Rock. The building stands at a mere three stories but is rich in commercial and retail history. It’s main rival, the Gus Blass Department Store, was located blocks away. The two stores would fight a retail turf war for much of the 20th Century.

Present day photo of the building 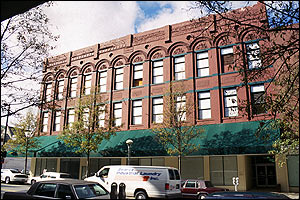 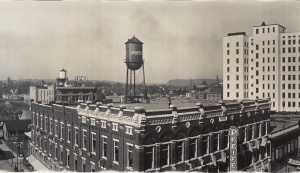 The Pfeiffer brothers opened their store in 1912 after remodeling the building to convert the store into “one of the most modern in the South.” One of the brothers actually traveled all over the north and east studying other stores getting ideas on what to do. The brothers combined their clothing and jewelry store and opened the store in 1912, claiming to be Little Rock’s first department store, competing for that title as well as customers with Gus Blass Department store. They wanted to create a store with all the modern conveniences. The store was the first in the area to be organized into departments. These new departments were Menswear, Children’s, Women’s, household goods, etc.

The Pfeiffer family came from a long line of business owning families dating back to the early 1800s. It seems as if every member of the family owned some sort of business in the region. Throughout the 20th Century the store would continue to grow and become successful. It would be bought in the 1960s by William Dillard and absorbed into the Dillard franchise meeting the same fate as its longtime rival, Gus Blass Department store. Today the building is home to the Pfeiffer family’s only flagship store. It also remains as one of four buildings that still stands from the early 1900s Main Street. It was made a National Historic Landmark in 2000.