Present day photo of the building 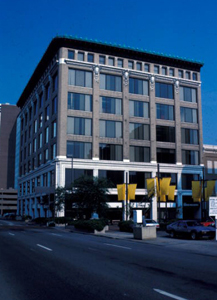 Vintage photo of the building 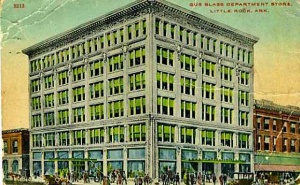 Gus Blass and Max Heiman opened the Gus Blass Department store in 1871 near the riverboat landing in Little Rock, AR. Over the next thirty years it would grow into several store fronts along the riverfront. A fire would rip through the area and damage the building where the store was located. The store would then move to its new location in 1913.

The seven stories “skyscraper” was designed by George R. Mann who was the most distinguished architects of the early 20th Century. It would become the first department store in the state with air conditioning and escalators. It was also the largest department store in the state and was essential in the growth and development of the retail industry in downtown Little Rock. In 1960 two Philander Smith College students, Thomas B. Robinson and Frank James Lupper staged a sit in to protest the segregation of the lunch counter.

The store’s main rival Pfeiffer’s department store was located just blocks away. In the 1970s the company was bought by William T. Dillard who would go on to create a chain of department stores, that spot the southern part of the country, known as Dillard’s. Dillard would also buy out Pfeiffer’s Department Store in 1963. The closing of the store signaled an end to an era of  “downtown” shopping experiences in Little Rock, as shopping malls would take over in the early 1980s. The building itself would be sold to a company called FABCO and turned into offices and apartments. The building became a National Historic Landmark in 1986.