One of the leading Children's Hospital's in United States, Cincinnati's Children's Hospital Was established in 1883 by local women affiliated with the Episcopal church. The hospital opened in a three bedroom house and held a total of fifteen beds.

One of the first photos of the Cincinnati Children's Hospital 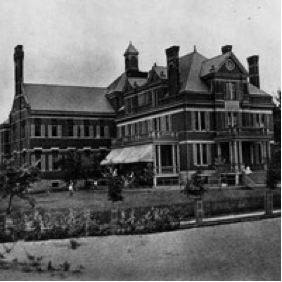 current photo of the hospital 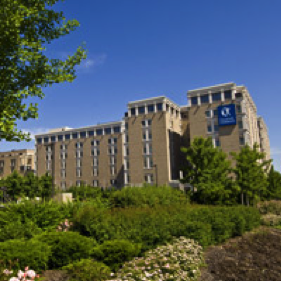 The hospital was founded in 1883 by a group of women from parishes located in the Cincinnati area. They wanted to create a safe and inviting place for children, as hospitals at that time were not great places for children, as an Episcopal Diocese project. They were approved by their bishop and the Hospital of the Protestant Episcopal Church, later the Cincinnati Children’s Hospital, would be created in November 1883.

The hospital stared in a three-bedroom home in the Walnut Hills area that only had enough room for 15 beds as it only contained one bathroom. The hospital would expand and a new hospital would be built in Mt. Auburn that would hold up to 90 beds and it would open in 1887. By the 1920s it would move to a 200-bed building and would become a part of the University of Cincinnati. Due to endowment from William Proctor, The Children’s Hospital Research Foundation would be built by 1931. By the 1970s, it absorbed five other independent organizations and became the Children’s Hospital Medical Center. In the 1980s it opened several satellite facilities in the surrounding area. It became the Cincinnati Children’s Hospital in 2002 and has been one the nations leading comprehensive care hospitals for children.

Throughout the years the hospital would lead the nation in important medical breakthroughs. In the 1950s, Dr. Albert Sabin of Cincinnati did a lot of research on encephalitis and dengue fever and would develop the oral polio vaccine that went into use in the 1960s. Doctors Samuel Kaplan and James Helmsworth also developed the first heart-lung machine in the 1950s.