Possibly the oldest religious institution in the coalfields, Nighbert Memorial United Methodist Church continues to be a thriving congregation of Christian believers. The church not only conducts services throughout the week, but also serves community dinners once a week for whosoever shall come. 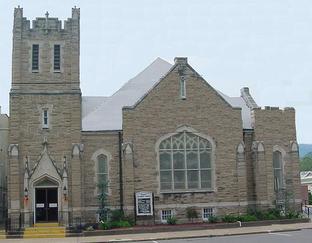 The first Methodist settlement was made in downtown Logan in 1799. According to the church's history, the first settlers in Logan were of the Methodist faith, and they would happily were circuit-riding preachers to come expound upon the scriptures with them. By 1825, a full-time pastor was assigned to the Logan area.

Before the church was constructed, the Methodist believers would meet in various homes of the congregants. Once the first Logan County Courthouse was built, the Methodists began to host their meetings there (since it was the only public building in town). The Logan County circuit during the 1800s would average around 250 members.

The 1880s brought about the first push to get a formal church building constructed in Logan. The church was deeded the land in Midelburg (just down the boulevard from the city of Logan at present day) where the Midelburg Apartments stood. Not too long thereafter, they built their building and became the first church to be built in the city of Logan. By 1916, the building became entirely too small to house all of the worshippers coming to the church, so they constructed the building that stands in downtown today (still one of the oldest in Logan). The architect was an Italian man by the name of Rosassi.1