The Jackson Memorial Fountain was constructed in 1905 to honor the contributions of important local resident General John Jay Jackson and that of his sons. The entire Jackson family was active in politics and served in prominent cabinet, legislative, and judicial positions. The fountain has been damaged by the elements repeatedly over the years, culminating in its complete collapse in 2018. The entire structure was replaced while remaining as faithful as possible to the original Victorian predecessor. The Jackson Memorial Fountain is the only civic work of its kind in West Virginia. This monument was placed on the National Register of Historic Places in 1984. 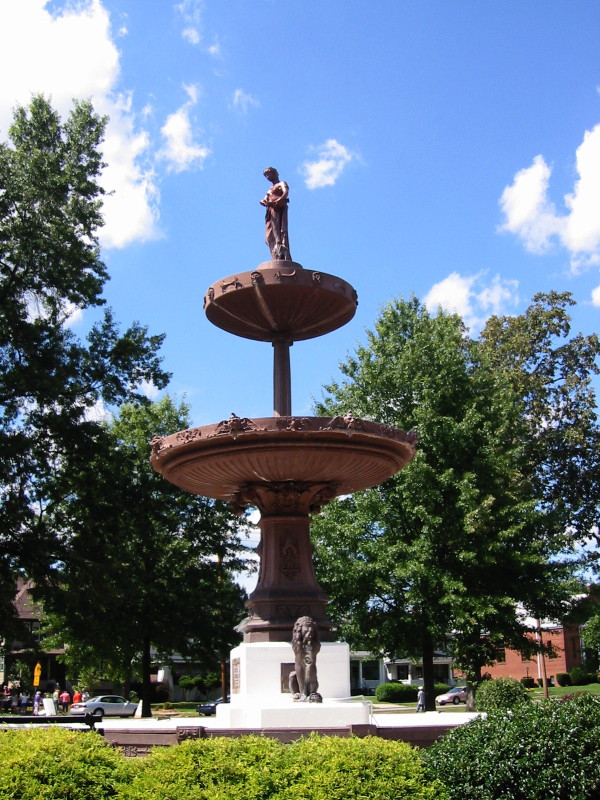 Inscription on the Fountain. 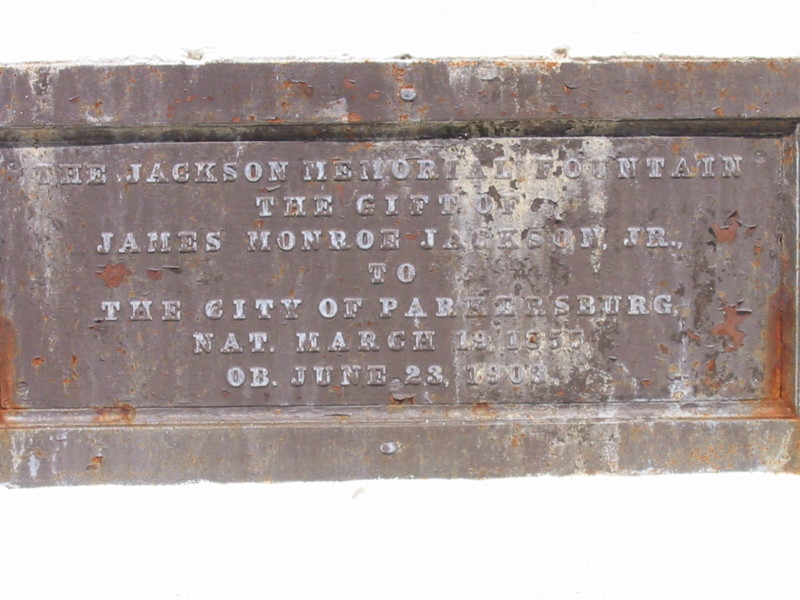 This postcard demonstrates the original physical appearance of the Jackson Memorial Fountain. 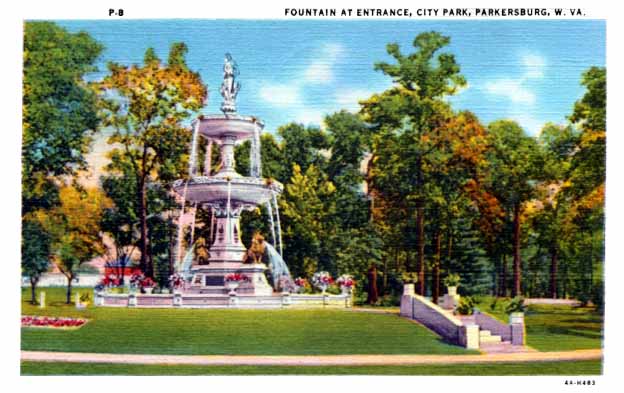 A photograph of the entrance of the Parkersburg City Park in the early twentieth century. 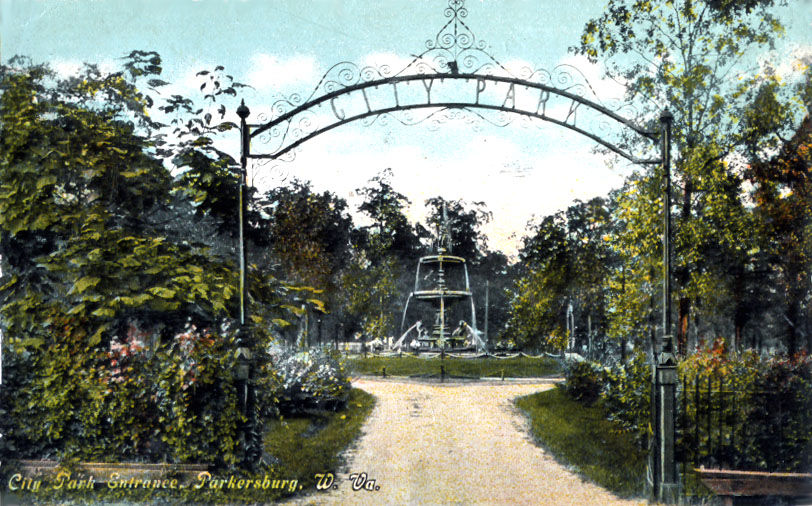 This photo from 1984 depicts the fountain when the top tier was removed and the Lady of the Lake instead rested upon the second tier. 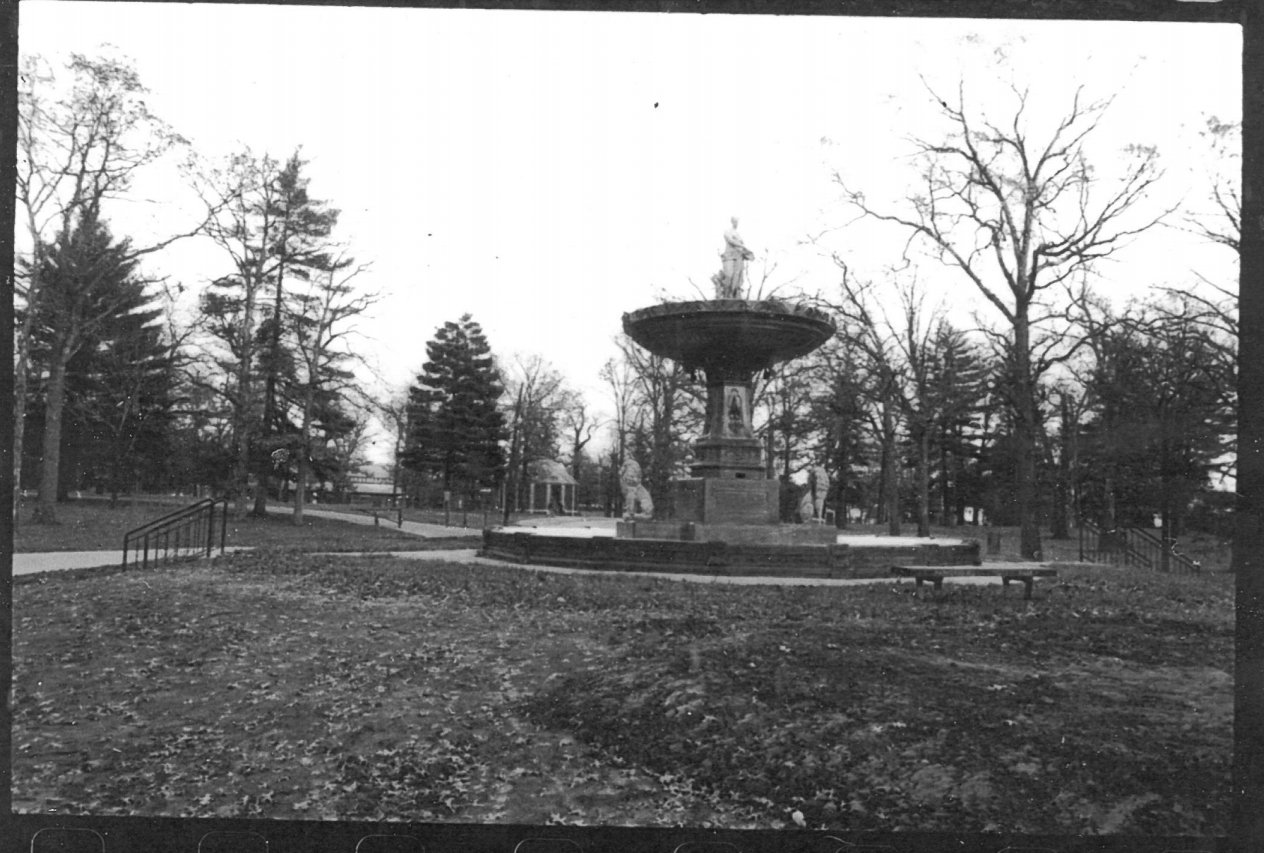 John Jay Jackson Sr. (1800-1877) was a Parkersburg resident who served as a member of Andrew Jackson's staff during the Seminole War. He also served in the Virginia General Assembly for six terms after leaving his position as prosecuting attorney in Parkersburg. Jackson's military career didn't end after the Seminole War; rather, as a middle aged man (from 1842-1861), he led a brigade in the Virginia militia. Jackson was a conservative, pro-slaver, and Union loyalist. He did not believe initially that the secession should take place and his voting record reflects this belief. Though he eventually supported the creation of West Virginia in 1863, he still opposed the Willey Amendment, which cleared the final roadblock to statehood. His opposition was due to the Willey Amendment admitting West Virginia as a free state through gradual emancipation of slaves.

Jackson’s sons, Jacob Beeson Jackson, Judge John Jay Jackson Jr., and James Monroe Jackson, we also actively involved in politics. Jacob Beeson Jackson was the sixth governor of West Virginia and one of his initiatives while in office was to attempt state tax reform. Unlike his brothers, Jacob Jackson did not attend college or hold a degree. His father educated him in the law and he was admitted to the bar in 1852. In addition, Jacob Beeson Jackson also served as prosecuting attorney for Pleasants County (for almost a decade) and Wood County, in addition to one term in the House of  Delegates. Jackson Sr.'s eldest son, his namesake, John Jay Jr., served as a federal district judge after his time as prosecuting attorney in Wirt and Ritchie Counties. In 1861, he was given the position of federal district judge by President Lincoln, and John Jay Jr.'s choice of election commissioners, in 1870, gave suffrage to former Confederates and allowed West Virginia to be placed under Democratic influence and control.

This fountain was bequeathed to the city of Parkersburg by James Monroe Jackson, Jr. in order to commemorate his family's achievements. In his will, Jackson wrote the following:

“It is my will and desire and I do direct that my said Executors shall of proper __and set aside five thousand Dollars out of my personal estate before any division thereof shall be made among my children, and that they erect or cause to be erected a public fountain within the limits of the City of Parkersburg upon some public park on square to be furnished by the authorities of said city, which fountain shall be accepted by them upon the conditions, that they shall protect, care for and keep in good repair the said fountain and the same property supplied with water for running of the same. The said Fountain to be known as ‘The Jackson Fountain.’ My said Executors are to ec____the said five thousand dollars aforementioned in the erection of such fountain of suitable design, and as ornamental as can be procured for the amount of money appropriated as aforesaid, and after the completion of said fountain, my said executors are directed to turn the same over to the authorities of said City of Parkersburg.[1]”

William Willard Jackson, executor of James Monroe Jackson, Jr.’s estate found a fountain matching the late Jackson’s criteria while the executor was on his honeymoon in New York City. The city accepted the gift in 1905 with little deliberation and agreed to maintain the public work in perpetuity. The fountain is the only major Victorian public work of its kind in West Virginia.

The Jackson Memorial Fountain is a three tiered Victorian styled structure. The tiers are surmounted by a sculpture of a woman known as the “Lady of the Lake.” The edges of the two lower tiers display intricate arabesques of curling vines and winged heads of men. The top tier is also beautifully adorned with several sculpted elements. Water cascaded from the top tier to the lowest basin. On the lowest basin, there were originally 12 vases around the perimeter of the fountain with two large sculpted lions, water spurted into the basin from their mouths. In addition, an archway and a staircase framed and led to the fountain. Today, the archway and staircase have been removed.

Sometime in the middle of the twentieth century, the top tier of the fountain was removed due to structural degradation. The Lady of the Lake sculpture was shifted down a tier and the overall height of the feature heavily decreased. A lightning strike heavily damaged the fountain in the early 1990s, and the upper tier was replaced with a fiberglass substitute. The dangers of over a century of exposure to the elements came to a head in 2018, when the entire fountain toppled over due to high winds. The second tier, the Lady of the Lake sculpture, and central support beam were all irreparably damaged. Parkersburg’s city council opted to have the fountain completely replaced with as exact a replica as possible. The project cost approximately $500,000, or one hundred times was paid for the original fountain. As part of the restoration of the fountain, the top tier was restored so that the structure once again resembles its original prototype. The Jackson Memorial Fountain is one of West Virginia’s finest examples of civic architecture.