The museum offers many educational programs. The museum interprets the maritime history, culture, and environment of costal Carolina. The museum is also available to be rented for special occasions or weddings. 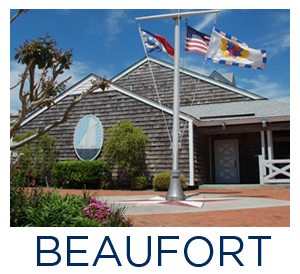 Charles R. McNeill was one of five founders of this museum. His interest in wooden boats began at a young age when his father gave McNeill and his brothers a 16' double ender. Since the very beginning Mcneill believed that sailors should be encouraged to visit Beaufort. He continued to make efforts to encourage visits from tall ships and character vessels. In 1975, the first traditional boat show was held and nine boats participated. By 1977, the third annual boat show was held for the first time at the newly opened Beaufort waterfront. The increasing popularity of the annual boat shows lead to many renovations and add on's to what is now the North Carolina Maritime Museum.

If you like to learn about pirates such as Blackbeard and his adventures this is a great place to visit.  It contains Maritime history exhibits, life saving stations, facts about the seafood industry, many types of hosts such as sailboats and motorboats and artifacts.  Featured there are artifacts from Blackbeard’s “Queen Anne’s Revenge”, which ran aground near Beaufort in 1718.

Classes are offered in sailing, boat building, ocean science studies such as hurricanes, tides, sharks and whales plus other demonstrations. The museum can also be rented for weddings, dances, birthdays and other events.  The cool ocean breezes and beautiful sunsets makes for a special occasions.