The Cincinnati Race Riot of 1841

The beginning of September of 1841 in Cincinnati, Ohio brought race riots that lasted for days. An altercation that happened in a candy store eventually led to a mob of 1,500 white men descending on Cincinnati’s black population of just over 2,000 citizens. The black men of the community fought back though, and upon seeing their resistance, the white men began firing iron shrapnel from a cannon into the homes and business of black citizens. Instead of arresting the white rioters, the police instead arrested every black man in the city. After all of the black men were in custody, the white mob attacked again, only this time they were attacking businesses and homes that were occupied only by unarmed women and children. The mob destroyed an abolitionist press, the Philanthropist, and threw it in the Ohio River. This time, with the help of militia, around 40 white men were arrested. 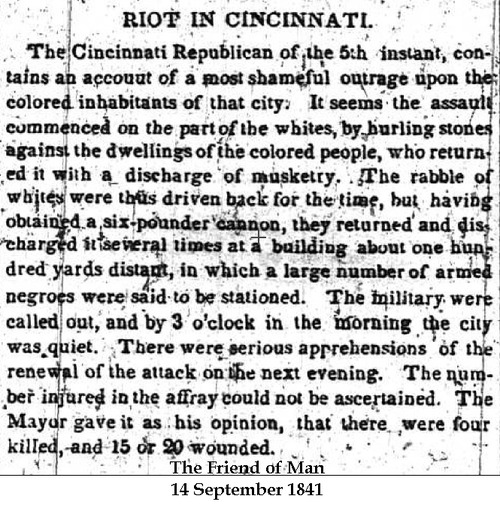 There was a man named Cornelius Burnett, an English immigrant and open abolitionist, who on June 25th of 1841 confronted a man from Kentucky and a constable who were trying to retrieve a runaway slave who was taking refuge at Burnet’s confectionary store. Burnet and his sons were involved in an altercation that led to the constable and slave owner being injured, and the man and his sons were arrested and held on a $3,000 bail. A white mob assembled to attack Burnett at this time, but the sheriff was able to disperse them.

That was not the case when a mob reassembled on September 3rd, 1841 though; following a fight between Irish immigrants and African Americans on September 2nd, a mob of 1,500 white men descended onto the black neighborhoods of Cincinnati, and their first target was Burnet’s candy store. The black men of the community were prepared to fight back though; under the organization of a Major James Wilkerson, armed men were able to defend themselves against the first attacks of the white mob. Upon realizing that the black men were successfully resisting their attacks, the white men produced a cannon and began firing loads of iron scrap metal into the home and businesses of African Americans.

Instead of siding with and protecting the African Americans who were being attacked, the mayor of the city, Samuel Davies, sided with the white rioters and placed the black neighborhoods under martial law. Under the guise of doing so for the protection of the community’s black men, every black man in the area was disarmed, arrested, and put into police custody. This left the rest of the black community defenseless, and the white mob took the opportunity to attack again, only this time they were attacking home and businesses that were occupied solely by unarmed women and children. They also attacked an abolitionist newspaper, the Philanthropist, by breaking up its printing press and throwing it into the Ohio River.

Like the mayor, the other newspaper in the area, the Enquirer, was of the opinion that the African American and abolitionist communities brought the wrath upon themselves and that the attacks by the mobs were fully justified. In particular, the Enquirer’s writers were outraged at the possibility of abolitionists causing southern businesses to choose to conduct their business elsewhere because of the abolitionist community, which is evident in the following quote from the paper on September 9th, 1841:

“To ascertain their origin, reference must be had to the period when abolition influence had so far prevailed, that a citizen of the slave States could not come to Cincinnati to trade - to spend the warm months, or pass the night in course of travelling, without having his negro servants decoyed or stolen away - when slave labor could not safely be employed on steam boats touching at our landings - and when Southrons finding this to be the case, went elsewhere and threw the profits of their trade and travel into the hands of other communities.”

1. Crowfoot, Silas. "Community Development for a White City: Race Making, Improvementism, and the Cincinnati Race Riots and Anti-Abolition Riots of 1829, 1836, and 1841." PDX Scholar (2010). http://pdxscholar.library.pdx.edu/cgi/viewcontent.cgi?article=1002&context=open_access_etds 2. "Cincinnati’s 1841 Riots: A Young Witness Survives & Marches to Congress And Academe" Accessed 27 April 2015 3. Kerwick, Jack. "Forgotten White Race Riots and What We Can Learn From Them" 17 September 2014 http://townhall.com/columnnists/jackkerwick/2014/09/17/forgotten-white-race-riots-and-what-we-can-learn-from-them-n1893122/page/full